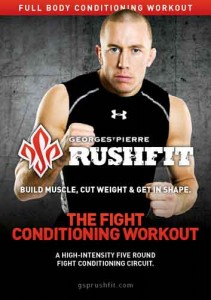 We get sent A LOT of workout DVDs. Like, they’re taking over an entire room of my house at this point. So when I say that one DVD (or set of DVDs in this case) caused me to have a full-out Oprah “aha moment,” you know it’s serious. But that’s what Georges “RUSH” St-Pierre’s RushFit series of workout DVDs did. They made me stop, scratch my sweaty head and then all at once on came the light bulb: WE ARE SENDING TWO COMPLETELY DIFFERENT MESSAGES ABOUT FITNESS THAT ARE ENTIRELY VALID!

This six-disc DVD set is intense. With titles covering strength, plyometrics, stretching and all kinds of intense exercise torture, it gives you the chance to train like its creator Georges St-Pierre, a Canadian professional mixed martial artist (MMA) and MMA world champion who holds black belts in both Kyokushin karate and Brazilian Jiu Jitsu. I’m not into MMA in the least, but apparently the dude has a huge following.

After trying a few of the workouts, I can see that those who want to train like him are a bit crazy—and are serious about pushing themselves harder and faster. (In the DVDs you warm up with push-ups, planks and jumping squats. And the main event is a fury of circuit training that will leave you a hot sweaty mess.) And I’m all about pushing yourself. Heck, between this tough workout and my recent fast running, I get it. In so many ways, we can do so much more than we think we can, and when you’re really living up to your full physical potential and embracing your inner athlete, you feel strong, powerful and like you can do anything. And isn’t that what being an FBG is all about—being your best and most awesome? Yes.

But also no. Especially when that pursuit feels more like work. FBG is also about treating your body with respect, loving yourself as you are right now and doing everything in moderation. We’re not about working out for hours in the gym (although, for the record, the RushFit workouts are all roughly 45 minutes) nor are we about doing something so hard that you think you’ll toss your cookies. Because, no matter how many times we see them do it on The Biggest Loser (even if it’s for the better in the long run), that’s just not fun. And we think that workouts should be fun!

These DVDs rock if you’re looking to beat yourself up and take it to the level that’s beyond the next level—or if you’ve already completed P90X and other hard workout DVDs like they were a walk in the park. And while we know that some of you readers fall into that insanely and awesomely fit category, we know that many of you still struggle to fit in a trip to the gym or are still searching to find an activity that you really love.

These days DVDs and fitness professionals (guilty as charged!) seem to either be telling you to work out as hard as possible to get results (that would be the Jillian Michaels camp) or just do something, like parking your car farther away or taking the stairs. When in reality, the best fitness advice out there is to do something in between. Parking your car at the back of the lot probably won’t help you lose weight or even greatly benefit your health, but it’s better than nothing. On the flip side, we don’t all need to train like an MMA fighter.

So here’s the fit bottomed line straight from the horse’s mouth: Move your body in a way that you love and in a way that inspires you. Fitness isn’t about beating yourself up—it’s about making the rest of life even more awesometastic. —Jenn