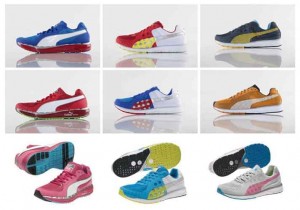 It was just a few months ago that I boldly declared, “I wanna go fast!” in regards to my running. And faster I have. Since that post, I’ve run a 7:20 mile, and I have high hopes that a sub 7-minute mile is soon within my reach. With this in mind, imagine my reaction when Puma contacted us, asking if we’d like to try their new uber lightweight running shoe, the Faas 500. It went a little something like this: Ah, hells yeah.

So test and run fast I did. The first thing I noticed? This $100 shoe was definitely light. With moderate support and a simple design that cut down on weight, it’s definitely a fast shoe. The entire Faas line also has something called BioRide, which kind of has the same idea of those Skechers shoes that promise a tighter booty (our thoughts on that claim here)—except they’re not made to lift the butt, they’re made to give you a more natural run. There’s also a groove (oh, it’s groovy!) that runs along the lateral side of the shoe for added responsiveness. And to make it even more desirable to Fit Bottomed Girls everywhere, it comes in cute, fun and bright colors. I tried the gray and purple ones,but am also smitten with the blue and lime ones.The only odd thing about these shoes is that the heel doesn’t have as much structure as other shoes, so if you’re used to easily pushing your heels down and kicking your shoes off after a long run, you’ll have to actually bend down and untie your shoelaces. Tragic, I know. (But they have to take the weight out of somewhere, I suppose.)

While these shoes alone didn’t help me run faster automatically (no magic bullets here, that takes training!), I did like them, and I’ve thrown them into my regular running-shoe rotation. It’s only a matter of time until I hit my running goals. Faaster I say…Faaster! —Jenn