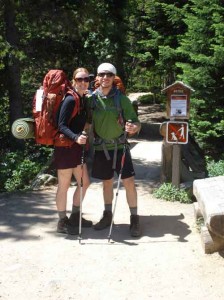 Me and my hubs before the real backpacking began.

Some like to vacation on beaches. Some like to relax on big cruise ships. Some see the sites of a new city. Me? I apparently like to go on vacay like a pack mule. (See photo evidence at left. Pack. Mule.)

As Bob Harper would say, going on a backpacking trip is “no joke.” Especially when you’re in the Rocky Mountains. When they’re having a hot-weather spell…after having a massive and late season of snow. In those conditions, you go days without showering, spraying on sunscreen and bug spray every few hours, and climbing up trails, over rocks, through snow and up, around and straight through streams that are out of their banks with said melting-due-to-heat-wave snow. Your hips bruise from carrying so much weight on your hipbones. Your outer thighs are tender from sleeping on just a tent pad and in a sleeping bag at night. Your lungs burn from the altitude change. Your shoulders are sore from pushing your trekking poles down into snow drifts to see just how deep that snow bank is (and, yes, you will fall through a few times). Brushing your teeth becomes a luxury. Drinking water means pumping water through a filtration system. Raisins and almonds taste like gourmet food. And you’re constantly paranoid/excited to see a bear.

That pretty much sums up backpacking. Which—reading back through it—doesn’t seem to be that much fun. But, really, IT IS AWESOME. No, really guys, it rocks. It was one of the best and most memorable trips of my life. Full of beauty, full of quiet, full of space. And full of lots of Fit Bottomed Girl-ness. 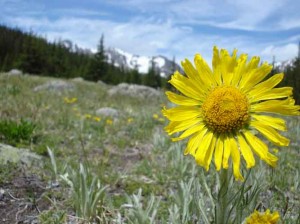 The trip began with a night in Boulder for the Fitness & Health Bloggers Conference. I had the honor of sitting on a panel about social media with fellow bloggers and general web rockstars Kia from Bodhi Bear and Stephanie from Back in Skinny Jeans and was blown away by the awesome attendees and their fabulous questions, not to mention how much I learned from Kia and Stephanie. Love the blogging world! Also, had a chance to try these. Like whoa, it was an experience. (And, for the record, they’re not nearly as hard to run and walk in as they look.) Then we—my husband and another couple—hit Rocky Mountain National Park for two days of regular camping (you know, the kind where you’re sleeping in a tent, but the car is like 20 feet away) and some easy hiking to get us acclimated.

Then the real outdoorsy stuff began. We hiked 1.5 miles into the Wild Basin area of Rocky Mountain National Park with our full packs. From there, we set up camp and were able to do a few short hikes. One was to a beautiful set of falls. Another was to a place called Thunder Lake, which could have easily been called Lose-Your-Ish-in-the-Snow Lake for we hiked up and in about eight feet of snow for two miles, following only footsteps for a trail and almost getting lost a few times. (This is when it pays to travel with a larger group, know your surroundings and have a compass.) The amazing lake was well worth the trouble though, and, believe me, you’ll never feel like a bigger bad-ass than when you’re hiking on snow. It was surreal. 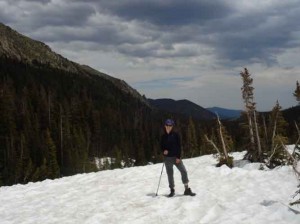 The next two nights we moved out of the Wild Basin area and drove up to the North Fork trailhead. From there we backpacked through 4.5 miles of National Forest to re-enter the National Park, followed by another mile to our campsite. Now hiking 1.5 miles with a full pack on is one thing, but 5.5 total miles? HOLY LEG WORK. And talk about a sense of accomplishment. From there we did an 8-mile round-trip day-hike (read: leave the BIG pack at the campsite) to Lost Lake, in which we only had to cross a few snowfields to get to. Child’s play, really, compared to Lose-Your-Ish-in-the-Snow Lake. I’ve been on a lot of hikes in the park, but—by far—Lost Lake was one of the most gorgeous sites I’ve ever visited.

On the way back down from Lost Lake we got stuck in a bit of a thunderstorm. Okay, a lot of a thunderstorm. Out of the entirely exposed tundra and into the treeline, we hunkered down under a rock overhang for the storm to pass (we learned later that really this isn’t the smartest move and instead you should just get on the balls of your feet and hunker down—thank goodness we didn’t learn that lesson the hard way) and watched it rain and hail(!) for about an hour. During this time—amidst rolling thunder and lightening strikes that made you realize just how powerful and how big of a bad mamma-jama Mother Nature is—a moose and her calf stumbled upon us. Literally, we were hanging out under the big rock in our brightly colored ponchos when she and her little one just came walking down the trail. Moose—especially mamas—are known for being territorial and not overly friendly, so we all breathed a little easier when she decided to go around us, keeping her distance yet still letting the four of us ooh and aah over the baby moose’s cuteness. Between the severe weather and the National Geographic-esque sighting, it was one of my favorite moments of the trip. 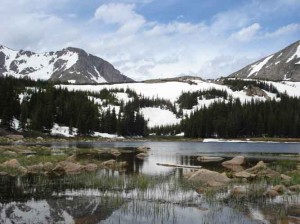 At gorgeous Lost Lake, before the hail.

We rounded out our trip with a final two nights in Denver, staying with some generous friends who allowed us to take over their bathroom for a few hours (believe me, after six nights camping, it was the best shower I’ve ever had) along with feeding us fabulously and showing us a few of the sites in Denver, including some tasty breweries and brewpubs that whipped up dishes that still have me drooling.

Over the next few weeks, I’ll be sharing much, much more from my trip. While out in the wilderness I got to test out a ton of gear and want to share more about what it’s like eating when backpacking (it’s a unique freeze-dried experience!). It really was a trip I’ll never forget, and I definitely plan to do more backpacking in my future. Sure, it was hard and I had the bruises and soreness to prove it, but it was also a moment of pride for me. I was proud of what my body—which I had been training with some pretty tough workouts—could do for me out in the “real world.” In total, we hiked more than 30 miles, almost half of which was with a full 35-pound pack.

I won’t call my Rocky Mountain National Park backpacking trip life-changing per se, but I would call it enlightening. After it I’ve had a greater appreciation for warm running water, my soft bed and my daily cup of French press coffee. Oh, and pack mules. They don’t get nearly enough respect. —Jenn