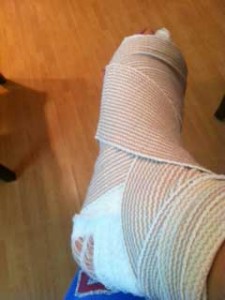 “Don’t it always seem to go that you don’t know what you’ve got ’til it’s gone.” —Joni Mitchell

I swear I didn’t know how much I’d miss working out until I went under the knife and had a cyst taken out of my foot. I knew I’d be unable to work out for awhile, but it’s been three weeks, and I still have another week and some change before the doctor will release me back into the workout world.

Four stitches and a benign cyst that was growing in my blood vessel…ewwww. I’ve had the darn thing since I started marathon training, but it didn’t start really bothering me until the Dole event. While Jenn was out enjoying the beautiful euphoria of an early morning California run, I was holed up in the hotel room nursing the painful bump on my second right toe.

That was the straw that broke the camel’s back. The next week I visited a foot doctor, found out it was more serious than I had thought, and before I could say “This little piggy went to the market” I had an appointment for surgery.

They put me under to remove Toe-fer (I named the cyst, yes) and put four stitches in that naughty toe. I’ve been hobbling around my home, counting down the days until the stitches come out. I’m glad I did it; don’t get me wrong. I had started to compensate for the pain by walking on the outside of my foot (bad!), so I’m trying to see the bright side of all of this. Not only am I getting my foot and correct step back, but I’ve also learned to appreciate a good sweat even more. I swear, the first day back in the gym is gonna be a killer, but I’ll appreciate every darn sweat bead that rolls down my forehead!

Ever had an injury? How sweet was that first workout afterwards? —Tish