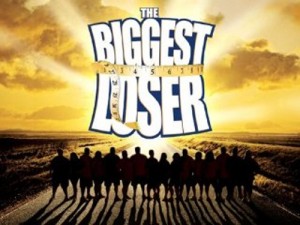 Drama, drama, drama. That’s all I can say about last night’s The Biggest Loser 13 episode. Week two is notoriously tough on the ranch, but both the trainers and the contestants took it to a new level last night with too much bickering, complaining and fighting (for my taste). I think @Annbrookstone put it best when she said “I want inspiration, not Jerry Springer!”

It all started with some smack talk during the poker game that, let’s be honest, Kim and Kimmy weren’t fully using their brains in. Then it escalated to Dolvett spray painting a wall on the gym for motivation and “stealing” Bob’s workout, which Bob was none too happy with. The energy was just off at the weigh-in, and everyone lost less than they wanted (yep, that’s week two for ya!). The pinnacle of drama though was the red team elimination, where Conda (who I always want to call Corona…) and Mike got into it. For too long. Santa tried to bust in and bring the two fighters back to reality with some substance, but it didn’t last long. It’s obvious that Mike has issues (smoking two packs a day as a 12-year-old? Like whoa.) and was making excuses, but it’s sad to see the show go so soap-opera-y so early. It might make for a long season…

Sad to say, but my favorite part of last night’s episode was probably Nancy cheering her team on by comparing them to “oxes.” Still, today, it cracks me up. Getting to know Chism was also pretty darn cool. He seems like a good kid.

Missed The Biggest Loser 13 drama? Get a taste for it in this video clip:

Can’t see the video? Click here to see some highlights from The Biggest Loser 2012 episode two.

What did you think of last night’s drama? Still excited for the rest of The Biggest Loser 13 season or are you hoping they tone down the drama? —Jenn