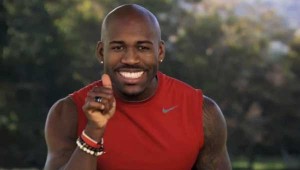 We like to think he's this happy because he's turned Conda around for the better!

I could start off this Biggest Loser recap complaining about the drama and Conda, but I think I’ve done that enough already this season, right? It’s old news. So this week, let’s focus on the other stuff that happened—the stuff that makes me want to turn on the TV every Tuesday night…

First, I know a lot of people on Twitter were freaked out by the challenge—and granted it ranked high on the claustrophobic charts—but I thought it was pretty cool. Digging down in the sand and then getting your body under a log is a big feat, and it took serious team work. I’m always a sucker for team work. Surprisingly, the red team rocked the challenge.

Then, we learned that one person from each team would be going home with their trainer, leaving the rest of their teammates to fend for themselves in the gym. And the cool part? The trainers got to choose. So Dolvett went home with Conda, and Bob went home with Daphne—who was fueled by some serious and rightly justified anger for her brother going home last week. While the black team put in lackluster workouts at the ranch, the red team seemed to push themselves darn well on their own. And Conda and Daphne? Well, it was interesting to see them at home and in their respective elements. Daphne opened up about her health issues and worries, and I think Dolvett actually had a break through with Conda. Although, like, we’ll have to see, like, if it sticks. Like, okay. (If you get the “like” reference, you were watching last night.) Here’s hoping though! Oh, and Dolvett babysitting Conda’s daughter? TOO CUTE.

At the weigh-in, Daphne took Conda (to which the crowd roared!), and the red team went to the elimination room. And then they voted off Santa, for reasons I cannot explain. Thankfully, Santa is quite healthy these days, playing with the youngsters in “North Country.” Despite the stupid vote-off, it was nice to see Roy looking that healthy and happy. (And he even ho, ho, ho-ed. Really.)

Enough about last night’s episode though. I stumbled upon this gem on NBC’s website, and, well, just watch. It’s delicious.

Fantastic, right? Gotta love Dolvett. (And don’t worry, Bob. We still adore you!) What did you think of last night’s The Biggest Loser? Confused by who they voted off? Hope Conda stops the ‘tude? Want more Dolvett montages? Share! —Jenn

Add a comment Cancel reply
5 Comments
Jenn & Kristen
Diets don‘t work. We know because we‘ve been there.
Get the deets
STAY IN THE KNOW
When new stuff happens, you'll be the first to know!
Latest Offer
Working out at home
Get free strength, cardio, yoga, and meditation videos.
Try them
Instagram
X