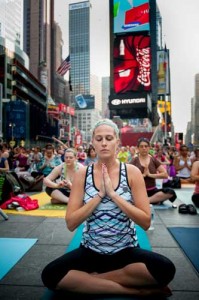 Proof that you can find zen anywhere. Credit: Greg Kessler

Atheleta was this year’s sponsor and they offered several free “Mind Over Madness” classes throughout the day, including the lunchtime Bikram yoga session I was lucky enough to participate in. It was taught by the amazingly talented Rajashree Choudhury, who is a five-time winner of the All-India Yoga Championship and the wife of Bikram Choudhury—the original founder of Bikram yoga.

It might appear to be difficult to find your inner quiet space in such an insanely busy environment. And The Times Square Alliance created a “Yoga Village” that ran from 42nd to 47th Streets on Broadway, which is right smack dab in the center of Manhattan. (Think of all of those movies you have seen showing a busy NYC. street filled with cars and signs for Broadway shows, and you get the picture!) Yet, somehow, I was able to get my clumsy body into pose after pose surrounded by some of the most serene people I have ever met in my life. 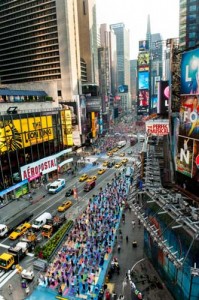 Just a beautiful day doing yoga in the middle of one of the busiest streets in the world. Credit: Greg Kessler

Seriously—this group really knew their way around a yoga mat and inspired me to stop thinking about traffic, the noise, the heat and the sound of hundreds of clicking cameras by both the press and tourists, as I worked on my downward dog and tree poses. (True story—I had my tush up in the air on 44th Street and Broadway while hearing dozens of cameras click away. Oh, well. At least I showed them my best side!)

My lack of flexibility never became an issue as soon as I made the connection that just being there with so many other like-minded people was good for me. And that getting away from my desk for a few hours (thank you @ericasara for meeting me in Times Square!) and making time to do something fun and novel would really fill my heart with so much joy.

As a matter of fact, I was in such a state of bliss, that when I stepped onto the wrong subway going home—something that would normally send me into a fit—I laughed it off and simply turned myself around. Why ruin a great afternoon over such silliness?

Thank you Times Square Alliance and Athleta—you will definitely be seeing me next year! Have you ever attempted yoga in a busy, loud place? Do tell! —Margo