As part of the first-annual Fit Bottomed College Week, each FBG is reflecting on her fitness experiences in college. Read on for the good, the bad and the oh-so honest! 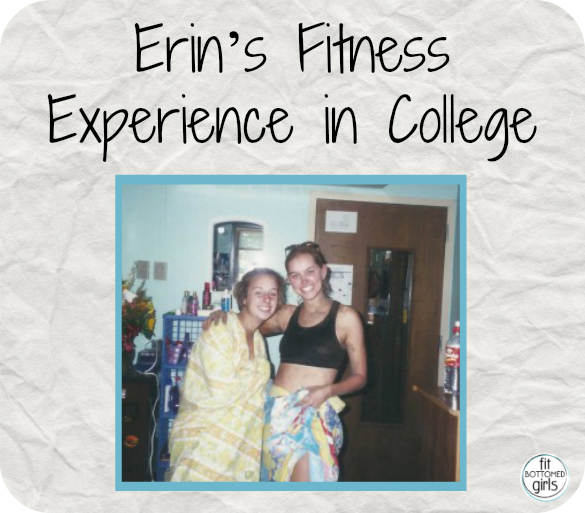 My roomie and I after a particularly festive game of mud volleyball. Pardon the sports bra.

Like Jenn, I loved college. It seriously was one of the best times ever. It had the lovely balance of some responsibility and freedom but not too much. Football games and basketball games (Rock Chalk, Jayhawk!). Fun with friends. All of that higher learning. It’s fun to reflect back on those years for this college week assignment, and I’ll just say I’ve come a long way…

My College Fitness Experience: The Good, the Bad and the Oh-So Honest

The good: The University of Kansas has a large and oh-so-hilly campus. My freshman year I heard a rumor that a P.E. class wasn’t required because simply getting to class was a workout. I don’t know if that’s why a P.E. class isn’t required, but it certainly is true. People frequently made the joke about having to get to class going “uphill, both ways.” Even having a bus pass to get you around campus didn’t mean that you escaped frequent 10-minute hikes before each class. I often showed up to classes sweaty, in need of a cool down.

As far as a real fitness routine went, I didn’t have one. I’d take up running, fleetingly, here and there. I’d do a Paula Abdul DVD with my college roomie on occasion, and she and I would go on speed walks together and jabber like crazy. But I honestly didn’t need a formal fitness routine because I stayed in awesome shape just walking and getting to class. When I was a 20-minute walk from campus, I never got a ride like some people did, even in the cold and rain. So when you’re speed walking to and from campus (I was always at the risk of running late because one more minute of sleep was always important) for a total of at least 80 walking minutes a day PLUS walking between classes? Yeah, you’re kind of covered on the cardio front.

I avoided the rec center like the plague because it was old and kinda gnarly. When my brother got to college, we’d play racquetball and tennis, but hitting the weights? No thanks. An awesome shiny new rec center was built my senior year though, and because I’d been a student (and paying for its construction) for four years, I had privileges to use it after I graduated, which I took advantage of for a couple of years until I moved out of town.

The bad: I spent some of the first year in college as a SMOKER. Even now I can’t believe I ever smoked.

The oh-so-honest: It’s a good thing I had a stellar metabolism and youth on my side in college because if I did to myself now what I did to myself then, I would spend days recovering. The dance-floor cardio was canceled out by the numerous adult beverages I’d (sometimes illegally) consume. The late-night pizzas were copious. The fast-food runs were plentiful. The wings? Don’t even get me started on the number of Buffalo wings I consumed in college. Plus, I worked at the Olive Garden and later a bar and grill, and working at restaurants doesn’t typically lead to the healthiest eating habits. (Though to be honest, running around restaurants does cancel some of it out.)

So yeah, my food decisions in college weren’t the healthiest. But at least I was forced to be active just getting to class.

How about you? Do you cringe thinking of the foods and drinks you ingested in college? —Erin