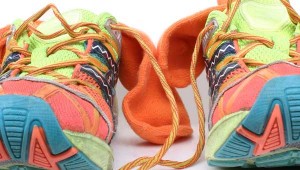 Is it time for me to lace up the running shoes? Credit: timtak

There has recently been a little jabber amongst the Fit Bottomed Girls team regarding taking on a half-marathon in the fall. My first thought was that walking it would be great. Fun fitness time together with gal pals.

But then I started to have crazy ideas. Crazy ideas about throwing some running into the mix. And then, after my brain digested those thoughts, I started thinking about running the thing. Running the whole thing.

Now. I have never been shy about proclaiming that running is not my favorite activity. I’m sure you could go into the archives and find at least 20 posts with that sentiment in there. I’d rather Zumba and walk and do workout DVDs until I’m blue (or red) in the face. But there is something appealing about this goal. About doing something, and conquering something, that I never really thought about doing. It’s appealing to have a challenge. A goal. Not to mention that a kick in the pants wouldn’t hurt when it comes to losing baby weight.

The 13.1 miles seems daunting—but not impossible. And with several months to train, hopefully I’d be able to gradually work up to increased mileage without injury. Granted, I haven’t run in a long while. (This was probably the last time…and it was for two takes of the video.) So I could go out for my first slow jog/walk and think myself insane. Or maybe after a month of training, I’ll decide to run/walk the race. Or maybe I’ll decide to run the whole thing. Who knows. But I’m going to find out!

Have you ever taken on a fitness goal you never even thought you’d consider? —Erin

Add a comment Cancel reply
16 Comments
Just for You
Drop the diet for good
A variety of anti-diet coaching programs just for you.
Get free access
STAY IN THE KNOW
When new stuff happens, you'll be the first to know!
About Us
Jenn and Kristen are passionate about letting women know they're more than a number on the scale.
Get the deets
Instagram
X