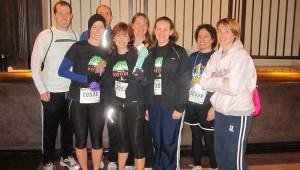 So earlier this year, I heard my husband muttering about wanting to run another half at the Kansas City Waddell and Reed Marathon. My first thought was “What, I can’t do that with you!” Small back-story: I screwed my hip up last time I trained for one and told myself I wouldn’t try another half marathon again. However, I didn’t want to wait two and half hours for him to finish the race, so I decided I would try the marathon relay again. I’d done it a few years back with my aunt and some of her friends. We had a good time, and I thought it might be fun to do it again.

I talked to my aunt about the relay and she was game. We did decide this go-around that we would have two teams instead of one, this way we could run with a partner. So we asked our friends and some family and barely made the deadline to get two teams together to run. That was an undertaking as many of my friends don’t run, and she was trying to recruit as many people as she could, but we figured it out. We came up with the team name of Guys and Dolls, and Dolls. One team would be a mix of guys and girls, and the other would be all girls.

As I trained for the race, I knew it was a distinct possibility that I would be running the six-mile leg of the course. I knew from my previous training of the half marathon and running other races since then that I couldn’t run any more than six miles. I wanted to run less, but I didn’t figure I would have much clout being as I was a more experienced runner in the bunch. I bit the bullet and went for the distance. I could do it!

I, of course, told myself at the beginning of the summer that I would be training all summer for this race and that I could hit the six miles. Then there was the nasty hot summer we had with NO rain and 100-plus degree temps. Yeah, not ideal for running. I did my best to run when I could and when the temps were closer to 90 degrees—still hot but not nearly as scorching. By the end of the summer, I was feeling a little leery about my training and whether I could pull this off. I never hit six miles in training but knew I could do it because I had done so before. But you never know on race day. 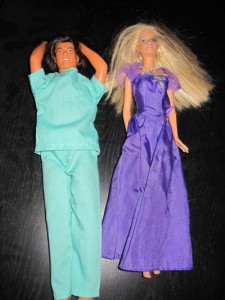 Check out our race “batons.”

Well, come race day I felt good and ended up with a great partner—having not run with her ever before, our paces were spot on. I lucked out on this one! I felt good most of the race and kept on pace, even going a little faster at times. We chuckled at many of the signs people were holding up to cheer everyone on. I distinctly remember one saying “Running takes balls; all the other sports just play with them.” You can’t help but get a good laugh out of that one, especially during those moments when you realize that running takes a lot out of you. Which I found out at about half way through…

By about mile five, I was hurting. My knees were not doing well and my ankles hurt—not good. I knew this might happen, but I drudged through it as best I could with the encouragement of my partner. I’d say if it wasn’t for her running with me, I’d probably have stopped. But with her by my side, I kept on trekking.

We ran through what felt like most of the city—our path was from the Liberty Memorial to 47 St. and JC Nichols Parkway. (Near a well-known shopping district called The Plaza for those who might not know the city.) Overall, the course was pretty good. We had one hill at the very beginning that I’ve run in races before and DESPISE. It’s a small gradual hill that is just the worst. Otherwise, the rest of the course was pretty pleasant with some rolling hills and many flat streets throughout the city.

At the conclusion of the race, both my running partner and I were seriously ready to be done. We passed our batons (Barbie dolls I might add!) on to the next person and shed a sigh of relief. “I did it,” I thought. I did it!

Although, now that my marathon relay is over, I’m thinking that it may be time for me to get back to some of my past  P90X workouts—and I’m getting ready to start Turbo Fire (wait for those reviews soon!). We’ll see if I run another 10K race again in the future, but for now, I’m going to take it easy. Well, if you can call those workout DVDs “easy!”

Are you a runner? A race addict? Or do you prefer to kick it (sometimes literally) with a workout DVD? —Kelsey