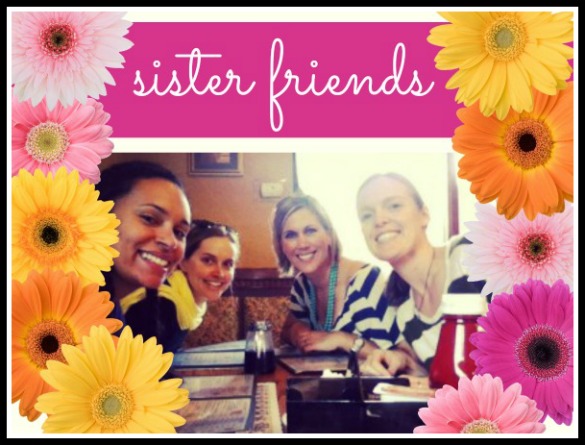 There’s a part of living a fit and healthy lifestyle that often gets overlooked: friendships. Okay, that’s not true. There is plenty of information on having a strong support system and people who support you. But I’m talking about having the deep, honest-to-goodness types of friendships where you can be yourself, snot almond milk out your nose accidentally and do the ugly cry in front of and not be self-conscious. People that lift you up. Friends who help you to work through the icky stuff when you’re down. Generally, women who push you to be even more you.

Got any of those in your life?

This post has been months in the making, as I’ve kept ruminating on the idea of “sister friends.” I’d heard of best friends, but sister friends is a concept I was originally introduced to by THE Dr. Maya Angelou for a freelance piece I was doing last May. I was talking to her about women’s healthcare, which you wouldn’t think would be that much about friendship, but she dropped in the following dynamite bit:

“A woman needs someone she can trust, someone who laughs when she laughs, but who has different ideas so she can learn from and teach to them. She needs someone who will stand up with her and encourage her to be a woman—not just a female. See where you are, admit what you know, and what you need, and search for a sister friend.”

Basically, every woman needs a bud they can call in the middle of the night and say, “Girl…the stuff has hit the air conditioner,” she says. Or, maybe in our case, the workout fan. Because as we all seek to be our best—be it in our eating decisions, workouts, romantic relationships, career, family roles and so much more—we all need support. And we all need acceptance and unconditional love. Someone to celebrate with, drown our sorrows with and watch bad reality TV with.

And I’m lucky to have quite a few in my life—even if many of them live miles and miles away. I’ve been sister friends with Tish since middle school. Erin and I share a brain. Kristen is always easy to have a refreshingly honest and open conversation with. And I have a slew of local friends who do everything from coming over for The Biggest Loser premiere to having a glass of wine at a local happy hour to hitting up a yoga class in the park. And they’re all open to eating my kale concoctions. For that, I am incredibly grateful. If the honor of a lifetime is to be yourself, these ladies help me do just that.

Talking to Dr. Angelou one-on-one was like—as Tish summed it up after the fact (You know I called her right after!)—standing in front of the ocean. I don’t think I’ve ever had such an amazing interview. She was just so present, and I felt like I was getting a message just for me, even though clearly I was on assignment. And it was a message—that even months later—I haven’t forgotten. Previous to my conversation with Dr. Angelou, I probably would have said that the three components to living a healthy life would be eating right, working out and loving yourself. But I’m ready to add a fourth component to that: sister friends!

Who are you sister friends? Who has your back and lets you be 100 percent you? How can you tell them thanks today? —Jenn