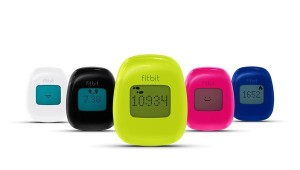 The Fitbit Zip is a zip to get set up and move with!

Is it just me or is the word “zip” really fun? Like, makes you want to move with extra pep in your step. Or get somewhere quick. Or quickly put on pants. Zip! So when we were sent the new Fitbit Zip to review, we were quick to get on it—zippy, you might say.

Now, we’ve reviewed the original Fitbit before, and we really liked it—and also used it as a launching point for a discussion on getting obsessive about tracking your stats. And, to be honest, with any pedometer or tracking device that’s going to be true. But we’re going to go ahead and say that the Fitbit Zip is a big improvement on the original unit (which is now called “One“). With just enough detail to keep you motivated but not so much that your eyeballs want to cross, the Fitbit Zip tracks your steps, distance and calories burned—and it has a cute little smiley face that either sticks its tongue at you, smiles or laughs with delight at how active you’re being. (If you have the The One, it’s like the flower that grows, but even happier!) To see your stats in real time, you just tap on the screen.

Comfy and light-weight to wear (on your bra or belt), the Fitbit Zip is also a breeze—or a, wait for it, ZIP!—to set up. You can seriously go from package to using it and synced to your computer in like 10 minutes without having to really “read” any directions. (Just photos, IKEA style.) Whether it’s online or through the Fitbit app, you can access your Fitbit account to set goals and stay motivated with graphs, badges and friendly competitions with other people you know who have a Fitbit Zip. Through the interface, you can also log eats and workouts. Oh, and your stats wirelessly upload via computer or iPhone. It’s super handy. And zippy. (Last “zip” reference, promise.)

The Fitbit Zip goes for a reasonable $59.95 and comes in five fun colors, too. The only thing we can really say that might be a con for this thing is that because it is so small and light, it can be easy to accidentally leave on and throw in the washing machine. So pay attention to that. But, really, we wouldn’t change a thing about the Fitbit Zip. It’s easy-to-use, encourages you to move and is so darn fun. If you’re looking for a pedometer, we recommend it!

Anyone else tried the Fitbit Zip? Agree with our review? Love making the smiley face grin all big like we do? —Jenn