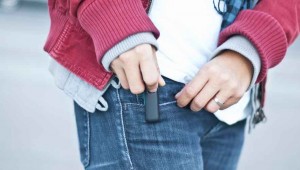 Do you guys remember back in 2004 (ish) when McDonald’s starting giving away pedometers with its salads? Well I got one of those back in grad school and—although they were totally cheap and fairly unreliable—I went kind of bananas over them. A way to measure how active you are both when working out and when just going about your day-to-day business? Awesome!

With the goal to hit 10,000 steps a day, I was a woman on a mission. Taking an extra lap around the quad when I had time before class, going up extra flights of stairs, adding an evening walk while on the phone with my boyfriend to my routine, I almost always hit my goal, many times getting more than 15,000 steps in. (I was a little lonely in grad school, so my pedometer sorta-kinda sadly became my friend, much like Wilson was to Tom Hanks—although without that whole isolation and talking-to-it-like-a-person thing.) Because this was back before my dietitian smacked some knowledge upside my head and waaay before FBG was even a thought, I kind of took the pedometer thing too far, becoming a little obsessed with the number. It wasn’t until I left my McD’s pedometer in a restaurant bathroom accidentally that our unhealthy relationship ended and I—you know—started living and not just counting my steps.

I know this is quite the preamble to a simple review of the Fitbit, which is basically a fancy-pants pedometer with technology that beats the heck out of the old ones (it uses the same movement-tracking device that’s in the Nintendo Wii), but I think it’s important because even though knowledge is power, sometimes knowledge can make you a little batty. (These are the same reasons why we recommend that people don’t get crazy about counting calories, only weigh themselves once a week or month and all of these other FBG tenets.) 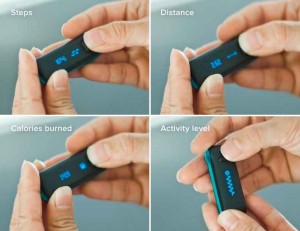 Our Thoughts on the Fitbit

So, with that off of my chest—and if my story sounds all too familiar please look into starting an FBG Weight-Loss Challenge in your area or at least read up on some of our resources on this and similar topics here and here—let’s start actually talking about the Fitbit! This little clip thingie is pretty rad.

It gives you a lot of data—steps, distance, calories burned, sleep efficiency and your activity level—and it’s incredibly simple to use. I’m a little slow when it comes to getting started with new gadgets and gizmos, but I had this thing working in minutes. Unlike the aforementioned McD’s pedometer, the Fitbit seemed pretty accurate for my steps, and I loved the little activity level reading that looks like a flower. As the flower grows taller, you’re more active; as it gets shorter, you’re less active. It’s a simple illustration but one that’s fun to watch.

You clip the Fitbit on your person just about anywhere—belt loop, pocket, even your bra (and at a wedding I wore it clipped on my undies and it still worked!). At any time you can click through your stats (unless it’s on your underwear, of course, and then things get a little trickier), and you can also synch your Fitbit up to your computer via a wireless station (also super easy to set up) and then track your info online over time, along with your workouts and eats if you so choose. At night you can even slip your Fitbit in a sleeve that goes around your forearm and track how much you move during your sleep, giving you a “sleep efficiency” percentage each night you wear it. Although this number really doesn’t tell you much in terms of what’s normal or even recommended, not to mention that your total number of hours asleep doesn’t even factor into your score, it’s a cool feature to see how much you thrash about each night, for sure.

Overall, for just $99, this little tracker is pretty darn cool. I’ve been wearing mine daily for more than a month now, and I’ll continue to do so. Not because I’m falling back into old obsessive patterns, but because it’s a way to be honest with yourself when you’ve been overly sedentary. These days I set a goal to hit 7,000 steps and do that most days of the week (especially when I run), but on my off days from the gym, I’m okay with 5,000 steps. Just like everything else, it’s a bell-shaped curve when it comes to being healthy and feeling good. Don’t move enough and your health goes down the pooper. Never stop moving, and you can become a crazy, obsessed person who really isn’t all that healthy. In the middle? That’s the ticket! —Jenn