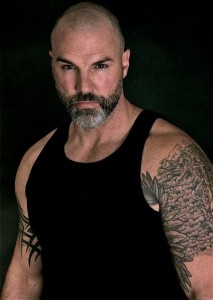 Seeing that it’s Fit Bottomed Dude’s Week and all, we wanted to do a special FitStars interview. One that would wow and inspire the girls and guys alike! And, peoples, we have it today! We scored an interview with Tim Holmes, who is starring as Strongman in the movie Oz the Great and Powerful that’s in theaters now.

Tim has been an action-suspense actor and stuntman and—after taking off some time to raise his 3-year-old twin boys—had missed a workout here or there to focus on being a father. When he landed the Oz role though, that all changed. To live up to the “Strongman” name, Tim ended up putting on 25 pounds of muscle in three months. Three months! Read on for more on how he did it naturally, what his workouts were like and what the whole experience and role taught him!

Interview With Tim Holmes of Oz the Great and Powerful

Dude, we love how honest he is about how he did it (and how he didn’t do it), how tough it was to lose the fat and how to survive in Hollywood! What a fun peek into that movie, too! And he sounds like a pretty darn cool dad, huh?

Have you seen Tim Holmes in Oz the Great and Powerful yet? —Jenn