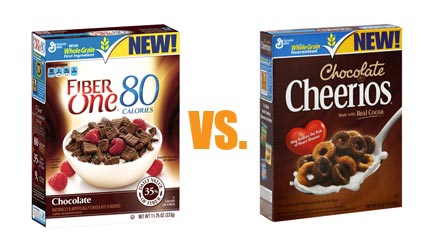 Chocoholics, rejoice! Cereal-lovers, get ready! And chocoholic cereal-people? Well, don’t wet yourselves. We have a chocolate-cereal Food Fight of FiberOne 80 Calories Chocolate vs. Chocolate Cheerios! And it’s getting cray-cray! Well, as cray-cray as whole-grain cereal can get. You might say that we’re going coo-coo for Cocoa Puffs, but that would be mixing our cereal metaphors, and, well, that just ain’t cool.

FiberOne 80 Calories Chocolate Cereal: Light and airy, these little squares have just the right amount of crunch. They get a little soggy in milk (which is a good thing in our cereal bowls!) but still hold their shape pretty well, as long as you don’t, like, decide to go for a two-mile jog in the middle of breakfast. There’s a lot of milk chocolate flavor, and it’s sweet but not sickeningly sweet. And there might be a slight aftertaste of artificial sweetener…more on that later though.
Chocolate Cheerios: This is pretty much exactly what you’d expect it to be: Cheerios with chocolate! There’s real cocoa flavor, along with everything you expect from plain Cheerios: crunch, floating on milk like little lifesavers and that yummy slightly sweet flavor.
Winner: Chocolate Cheerios! We like how airy and light FiberOne 80 Calories Chocolate are, but the strong chocolate flavor and the lack of an aftertaste on the Chocolate Cheerios seals the deal!

FiberOne 80 Calories Chocolate Cereal: For a major cereal, this ingredient list isn’t shocking, and you can figure out pretty much what everything is. The one thing that stopped us in our tracks though? Sucralose. That’s an artificial sweetener, guys, and it’s what both keeps the sugar-gram count down and what gives us that aforementioned hint of fake-sugar aftertaste. Also, it definitely has wheat in it.
Chocolate Cheerios: Truth be told, this ingredient list looks a whole lot like the other one—except no sucralose. And it “may” have wheat in it, according to the label.
Winner: Being that we like our food as clean as possible, we have to go with the Chocolate Cheerios on this one!

Don’t get our food-fighting twisted. We know that chocolate cereal should be treated as a sometimes treat (dessert, anyone?) rather than an everyday breakfast, but if you’ve got a hankering for chocolate and only a cereal can crunch it, we give you your Food Fight Champion…Chocolate Cheerios!
Do you like a little chocolate in your cereal? Declare a chocolate-cereal rematch? —Jenn