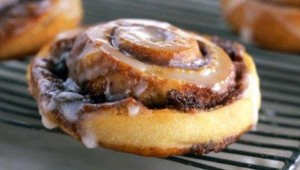 This healthier cinnamon rolls recipe by Janak Shah is a part of our fourth-annual Guest Bloggers’ Week. (Check out all of the inspiring, informative, entertaining and life-changing posts here!) You can find loads more healthy dessert recipes on his free iPhone app, Healthy Desserts.

Traditionally cinnamon rolls are made with a moist, sweet dough (containing added fat and sugar) that is then rolled up with cinnamon and more sugar and then drizzled with icing (which of course, is basically more sugar).

In order to make a better-for-you cinnamon roll, you have to reduce the amount of sugar in the dough recipe, and add cardamom to enhance the flavor. Cardamom is a spice typically used Indian curries, chai tea and in Scandinavian sweet buns. Similar to ginger, cardamom helps to aid digestion and has been shown to have anti-inflammatory benefits.

Instead of drizzling icing on the top, sprinkle on some pearled sugar, which will give just enough sweetness without adding as many calories as icing. In order to add fiber and protein, replace part of the white flour with whole-wheat flour and add almonds to the topping. This recipe is now worthy of this website!

Directions
1. Warm the milk until it reaches a temperature of approximately 110° F. Add the yeast to the milk and stir to dissolve. Set aside for about five minutes.

2. In a large bowl, mix together the sugar, salt, flour and cardamom.

3. Melt the margarine and add to yeast mixture. Stir. Slowly add liquid mixture to the flour while stirring to combine.

4. When the mixture is too stiff to stir with a spoon, remove from bowl and continue to kneed for about 10 minutes until the dough is soft and elastic.

5. Cover with a clean towel and set in a warm place to rise (about 30 minutes).

6. Once dough has doubled in size, roll until the dough into a rectangle about 12 by 16 inches.

7. Leaving about 1/2 inch on one of the long sides, spread with margarine and sprinkle with cinnamon and sugar.

8. Roll the dough lengthwise toward the bare side of the dough so that the filling remains inside.

9. Cut roll in half, and then half again. Then cut each quarter into thirds. You should now have 12 rolls.

10. Spray an 8-x-13-inch square baking dish with non-stick cooking spray. Arrange rolls cut side up in dish and cover to rise again (about 30 minutes or until they reach desired size).

11. Brush with a small amount of milk and sprinkle with pearled sugar and almonds.