This fall, I got really, really friendly with spaghetti squash. It was in season, cheap, and I’d eat it at least twice a week — subbing it in for pasta, using it as a base to sop up leftover chili, using it to top off my Big-Ass Salads. And, then, sadly, the seasons turned and spaghetti squash was no longer to be found (easily and cheaply, at least). And, so, I mourned the spaghetti squash.
Until Santa brought me this. A veggie spiralizer. 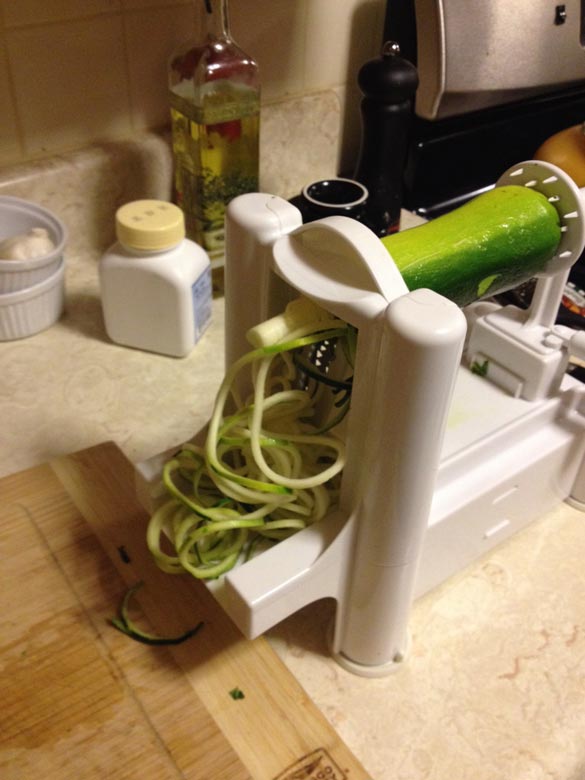 It’s kind of changed my life. Not only is it relatively affordable (around $30 on Amazon), but it’ll easily turn just about any veggie into spirals. Meaning that you not only have pretty veggies (Spirals! Yay!) but also that you can then use said spiraled veggies kind of like you would spaghetti squash … in ANYTHING.
And it’s fun to do! From the looks of the box, I figured this might be like one of those “As Seen on TV” things that look a whole lot easier to operate on television than in reality, but it was simple. Pick your spiral cut, pop in the corresponding blade, align up your veg, and turn the handle. Almost magically, veggie spirals appear! It kind of reminds me of those Play-Doh “food” sets, but in a more delicious — and, um, real — sense.
My first night with the veggie spiralizer resulted in yummy, yummy gluten-free and Paleo pasta. I simply spiralized (yep, it’s a word) the zucchini and then nuked them in the microwave for a few minutes until lightly steamed. I tossed the spirals with a little olive oil, salt and pepper, and then topped it with my favorite pasta sauce with chicken sausage. 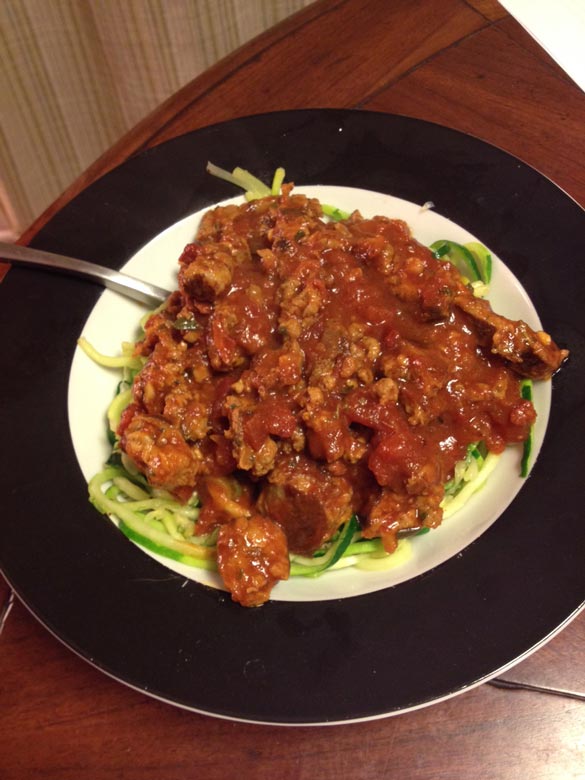 So simple, so healthy, and so much like real pasta! I love sneaking in veggies, and this was a great way to do it. Best. Gift. Evah!
Did you get anything delightfully fit and foodie for the holidays this year? Ever tried a veggie spiralizer? Do tell! —Jenn