For FBE’s first Cocktails Week, we thought it would be fun for us to each share our favorite cocktail or liquor. And today Karen is giving a big ol’ cheers to Kona Brewing Company’s Koko Brown!
Take the perfect vacation spot. Let’s just go ahead and call it Hawaii. Now let’s pick the most ideal warm weather beverage imaginable. Hands down, it’s gotta be beer, and what do you have?
You’ve got Kona Brewing Company’s Koko Brown — the distinctive island brew made with real, toasted coconut! Smooth and malty, this rich, mahogany colored ale makes me yearn for a paddleboard and flip-flops. Open the stubby, brown bottle, inhale and sip — ahhh, coconut. Not sickly sweet like a pina colada, just fresh, natural coconut with a nutty, toffee flavor thrown in for balance. Its aroma alone is enough to transport me directly to the place I love. 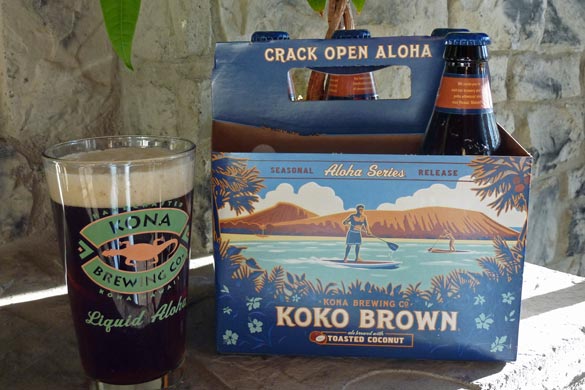 Since 1994 the Kona Brewing Co. has been creating handcrafted ales and lagers, right there on the Big Island. They make at least a dozen different brews, ranging from blonde to black in color and from tangy to hoppy and roasty in flavor. But Koko Brown, a small-batch brew from their seasonal Aloha Series, is by far my favorite.
If you are lucky enough to live in one of the 36 states to which they ship, it’s not overly difficult to find the most popular of the Kona brews here on the mainland. Longboard Island Lager, Big Wave Golden Ale and Fire Rock Pale Ale are readily available at my local liquor store year round, but my coveted Koko Brown only shows up around February and usually in short supply. More often than not, I scout it out and pick up a few six-packs to get me through the last vestiges of winter.
Kona is the top-selling craft beer on the islands, and I’m sad to report that their draft beers never travel. If you want to enjoy local favorites, like Duke’s Blonde Ale or a Hula Hefeweizen with its unique banana/herbal flavor, you must make the trek to the islands.
It may be too late to put your hands on a Koko Brown this year, but if you long for Hawaii and that elusive “Aloha Spirit,” go ahead and give any of the Kona beers a try.
It’s hard to identify, but there is something magical about those islands.
Maybe it’s the lush green mountains or the 200-something waterfalls? Perhaps it’s those soft, sandy beaches and the almost constant 78-degree temperature? Or maybe it’s simply the Kona beer.
Have you given any of the Kona beer a try? Which is your favorite? —Karen