Two words that I would never use to describe 2- and 3-year-olds: rational beings. They’re like little angels and demons; Jekylls and Hydes. And they can switch between the two so fast your head will spin. 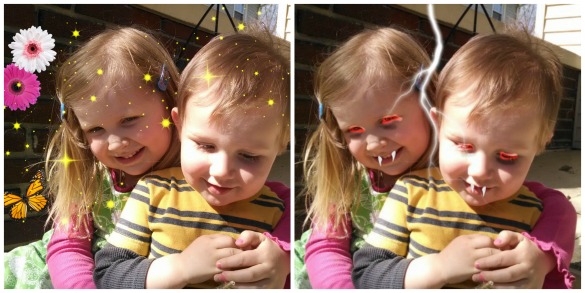 Angels and sparkles and light one minute; lightning and fangs and claws the next!

One morning, my 3-year-old will be a model of independence. She’ll go potty, pick out a (usually questionable) outfit, and get herself dressed. The very next morning? Oh, the torture that is getting dressed. Woe! Agony! Drama! “I will NOT put on my socks. I will NOT put on my pants. I want to go naked to school.” Clearly that can’t happen, so there is much fighting and coaxing and trying to convince an irrational person that she needs to get dressed.

My son is the same — all the emotions and nerves are on the outsides of their bodies, I swear it. He’ll ask for a train or book, and if he’s feeling contrary (which is my favorite way to say “my kids are crazy” — contrary sounds so agreeably disagreeable), he’ll throw a fit about you actually handing him what he asked for. “I want the train. I DO NOT WANT THE TRAIN. HOW COULD YOU GIVE IT TO ME AND RUIN MY DAY!?”

So much patience necessary.

But the funny thing I’ve noticed lately is that I have a weird effect on my kids. And not in a good way. They can be calmly sitting with their dad, reading or playing nicely. I’ll walk into the room and chaos ensues. Tears and pushing and shoving and clawing. Or I’ll run out for a quick errand, come back to calmness and within five minutes they’re doing their best to bring the house down. Or I’ll be giving them a bath and they are kicking and splashing and trying to drown the other one or dump water out of the tub. But my hubby does bath time? Angelic little water babies. The first few hundred times this happens, you think, “Oh, weird coincidence! They’re just rascals today!” But after about 359 times, you’re like, “I bring out the worst in my kids.”

I’m not worried about it. I tell myself that maybe they’re just super comfortable and can let all the negativity out around me. Or something. But it would really help to know it’s not just me. So, tell me …

Do you feel like your kids collapse into balls of drama and emotion the minute you enter the room? —Erin