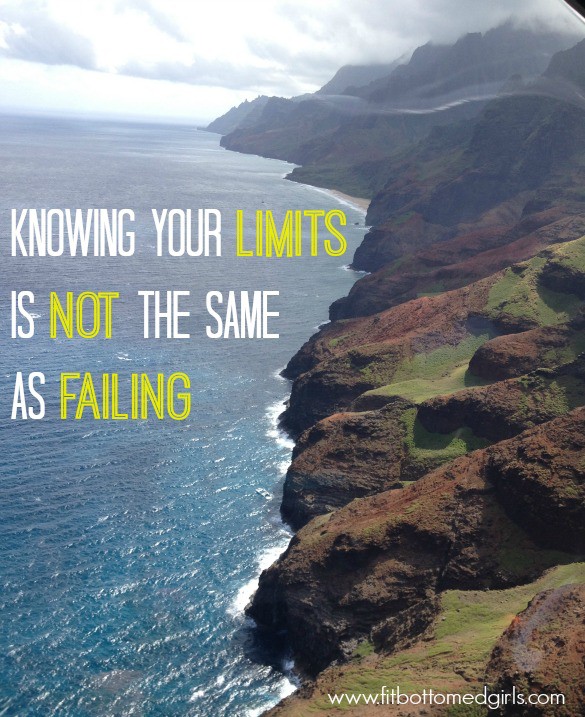 Pretty sure this is right around where we hiked (and where I learned a little about my limits). Credit: Kristen Seymour

I’m back from Hawaii with a bit of a tan, a few surfing-related wounds, and a ton of stories I can’t wait to share. It turns out you can fit a lot of FBG-worthy activities into a two-week period! So, I hope you don’t mind, but you’ll see quite a few Hawaii-related posts over the next couple of months. Sorry! 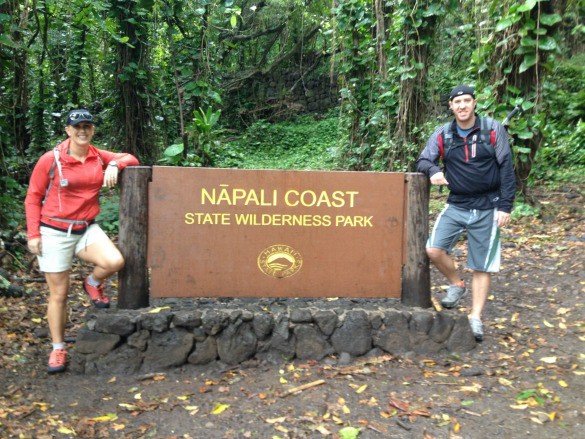 Our boots are tied tight, and we’re ready to hike!

One of the activities Jared and I had been most geeked about was hiking Kaua’i’s Na Pali Coast. There are several hiking options there: You can do a rugged 11-mile hike to Kalalau Valley, where you can camp overnight before returning. However, even under good conditions, this is a pretty intense hike with some narrow ledges and steep drops, so we decided against that when we first began planning.

Hanakapi’ai Beach (it’s a no-go for swimming, but a lovely stopping point) is just two miles and one small river crossing in, and just two miles beyond that is a waterfall, which is where we planned to go. Four miles out and back? Sounds like a perfect full-day hike, right?

Now, we visited at the end of a pretty severe rainy season, and it’s well-publicized that this trail isn’t a great idea in bad weather, partly because it becomes slippery and dangerous, and partly because, you know that river crossing I mentioned? It can become difficult and treacherous and is prone to flash floods. 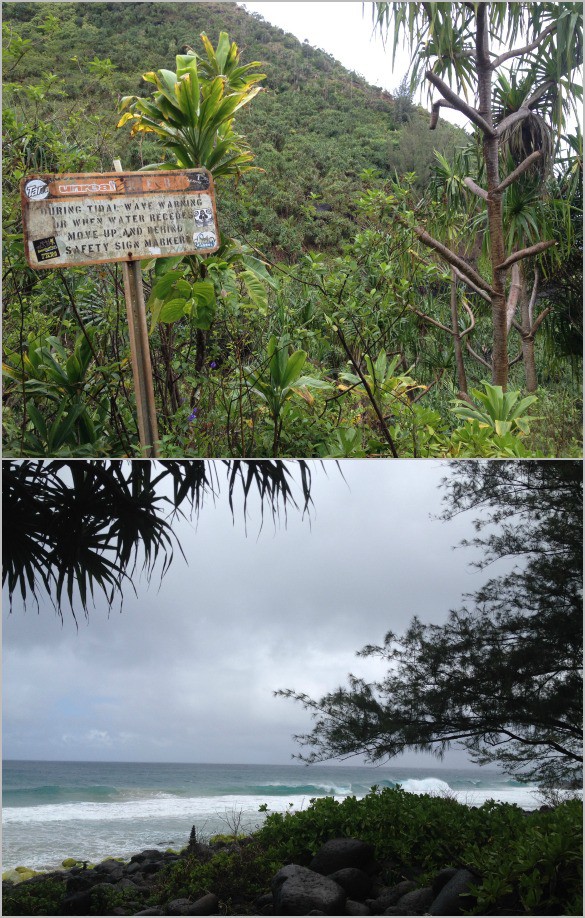 Oh, okay, so that’s where I need to go in the event of a tidal wave. Good to know.

So, in theory, we knew going in that it was entirely possible we wouldn’t reach our ideal destination, but neither of us have ever had to bail on a hike before. It was hard to really believe it was going to happen now.

The day of our hike, the weather was drizzly, but everyone assured us it would clear up. However, as we drove along winding roads and across one-lane bridges in search of the trailhead, conditions didn’t improve much. We figured we’d see what the crowd looked like — if nobody was hiking, we’d pull out, but if it seemed safe enough for others, what the hell, we’d give it a try. 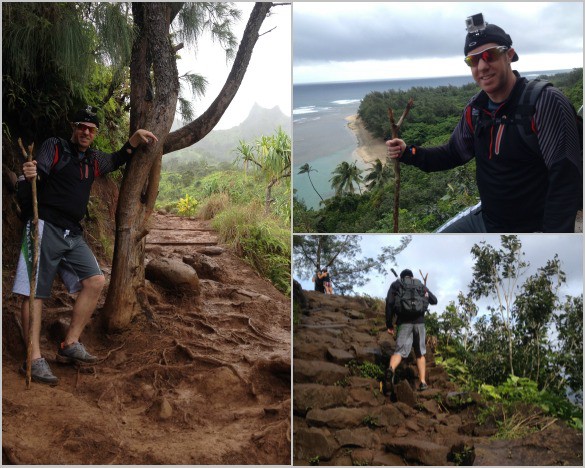 The best hiking buddy a girl could ask for: my husband, Jared (aka Gandalf the Geek, as evidenced by his ever-present GoPro mount and wizard-like walking stick).

Upon arrival we saw that plenty of people were braving the drizzle (which was becoming actual rain on occasion) to hike, so, we laced up our hiking shoes, strapped on our backpacks, grabbed walking sticks (did you know that at the start of many hiking trails, folks leave great walking sticks? Always look near the entrance or the sign — my stick was quite possibly a literal lifesaver on this hike!) and hit the trail …

Which went straight up for the first 400 yards or so. Straight. Up. We were basically mountain climbers, you guys. 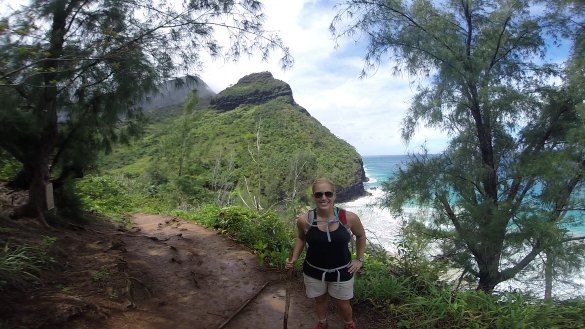 Where’s that you want me to hike? That mountain over there? Oh, sure, no problem.

We were a little out of breath by the time we got to the first good stopping point, but it really didn’t matter because the views were so spectacular. And we figured that, even if it continued to be challenging, it was at least doable, so off we went. We had this hike in the bag, practically. 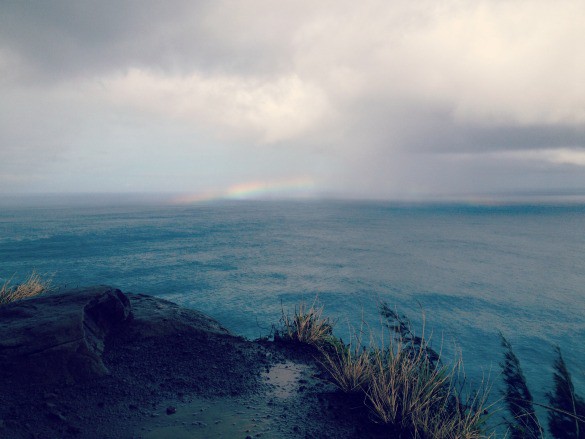 If we had to put up with rain, at least we got to see a rainbow, right?

About two hours, numerous slips and near-falls, countless aching muscles (not to mention seriously sore knees) and an assortment of bruises later, we arrived at … the beach. That’s it. Two miles. In two hours. And we were feeling it.

Nonetheless, we took a short break, had a snack, and started off for the second half of our outbound voyage. We were going to see those falls, dammit. We’d even brought our vows with us, thinking that might be the ideal place to renew them.

In the meantime, the rain had picked up again and this new portion of the path began to increase in difficulty. I was no longer just leaning on my walking stick — I using my other hand to grab trees, rocks, whatever was nearby, either to hoist myself up or to scootch more securely along narrow portions of the path. Maybe a quarter of a mile in, Jared was ahead of me and the trail got awfully skinny. His feet slipped a bit and my heart stopped completely. I looked at him, looked at the river below, looked at the path, and found myself holding back tears.

He turned back and looked at me. “Are you sure you want to keep going?” he asked. He’d asked several times before, but I knew how much he wanted to see the falls — I wanted to, too — so I’d refused to quit. But now I wasn’t just sore and tired. I was legitimately scared.

“I can’t. I just … I can’t. I’m so sorry,” I said as I clung to a tree trunk and attempted to turn around. “I’m all for facing my fears,” I said, recalling the helicopter ride we’d gone for the day before, “but this is too much. I’m scared you’re going to fall. I’m scared I’m going to fall.”

“I’m scared we’re going to get another mile into this and not even be able to continue,” he said. “Let’s head back.”

I don’t often fall short on physical goals. If I say I’m doing a half marathon, I do an effing half marathon (even if it’s the most miserable 2.5 hours of my life). If I say I’m going to swim across a lake, I’ll see you on the opposite shore. Quitting when even the faintest option to continue still existed was pretty new to me, and I won’t lie, I struggled with it pretty heavily for a while. 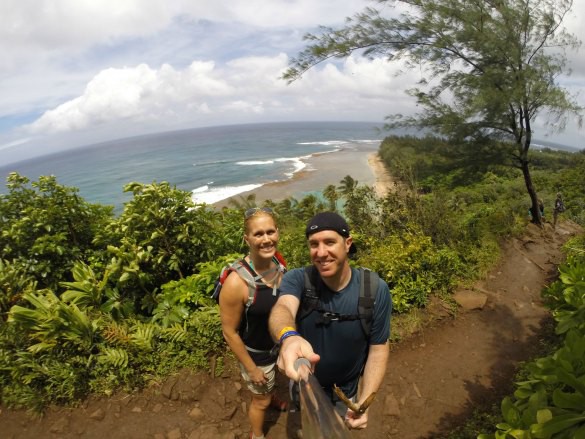 You can see by the look of relief on my face that we’re headed back to the car at this point.

But, as we got a mile or so back toward the trailhead, Jared and I both acknowledged that we’d done the right thing. He might not have been too scared to take another step the way I was, but he was uncomfortable and happy to cut things short. On another day with a different weather forecast, I have no doubt this story would’ve ended much differently — probably with a swim in a pool fed by a waterfall. On this day, though, giving up on our goal and embracing the experience that was handed to us was undoubtedly the right move. 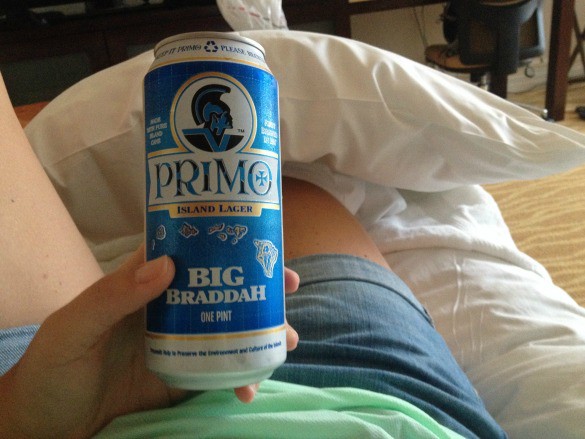 After a little ice on the knees and a nice, cold beer, I was basically as good as new!

I’m grateful for the experience of taking on this trail (and for the fact that I have a super supportive partner who recognizes when I’ve had enough), but I definitely hope to take another crack at those falls one day. Anybody else had a similar experience? Have you ever had to call it quits and realized it was the right decision? Or, have you pushed on and realized perhaps you should’ve turned back earlier? —Kristen

Add a comment Cancel reply
4 Comments
Jenn & Kristen
Diets don‘t work. We know because we‘ve been there.
Get the deets
STAY IN THE KNOW
When new stuff happens, you'll be the first to know!
Latest Offer
Working out at home
Get free strength, cardio, yoga, and meditation videos.
Try them
Podcast
Podcast Ep 137: That’s a Wrap!
Instagram
X