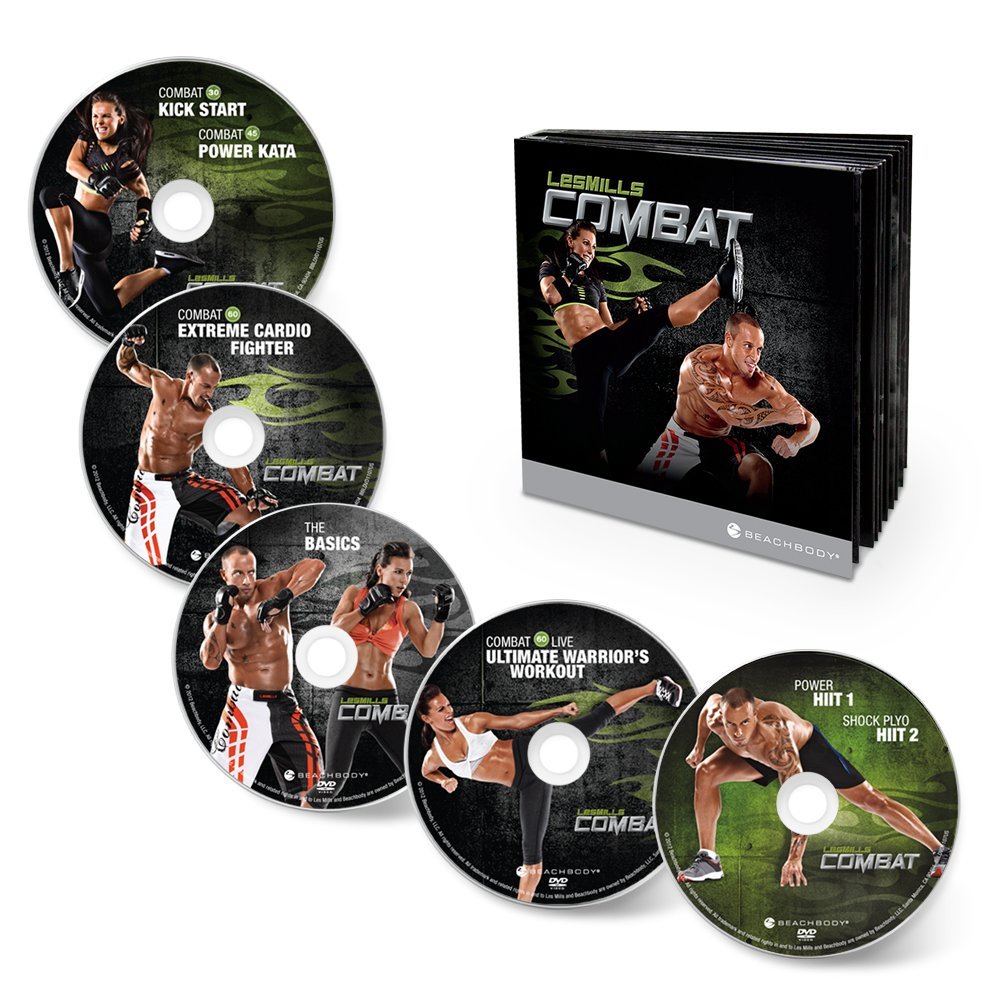 It seems as though my reputation of an on-again, off-again workout person holds true most of the time. I’ve been know to go several months without working out after I try a hardcore DVD series; I guess my thinking is, “Okay, I’m done! Now I can do what whatever workouts I want, whenever I want, and not follow a strict regime.” Ha! Then that goes to hell, and I tend to stop working out altogether. That’s never good, right? Oops.

Well, at the start of Les Mills Combat, my on-again, off-again style had in place. I completed Turbo Fire in the spring, then didn’t have another P90X to keep me occupied, so I tried to get outdoors a little over the summer. That just doesn’t always fly when life and work get in the way.

I took on Les Mills Combat to get back into the groove of working out and keep myself active because I don’t like to stay stagnant for too long, believe it or not. I was looking for something new and different to try, so I got the 60-day DVD series from FBG Jenn. I was definitely excited that it was a shorter series — that meant I would get done sooner, unlike previous series I’d done that were 90 days. I was stoked.

The series was led by a guy/girl team, Dan and Rach, both from England. Their fellow fighters were people from around the world (Spain, Sweden, Asia and the good ol’ USA). Bringing in a more diverse group gave a little more depth to the program, and I liked knowing that these kind of techniques are used throughout the world, not just in Europe or the U.S.

The series combines many martial arts techniques with kickboxing and, of course, some cardio, plyometrics and strength training mixed in as well. But overall, it sticks to mostly mixed martial arts like taekwondo, karate and Muay Thai boxing and more.

I was not a fan of the plyometric workout — it had everything I despise about working out all in one workout — burpees, squats, push-ups, lunges, etc. On the days with the martial arts being the focus of the workout, I mostly just tried to not look awkward and stay coordinated as much as possible.

The series doesn’t separate itself into phases, which I didn’t like very much. It just continued with the same workouts, adding one or two more to the mix by the latter half of the 60 days. I guess you could say I like a little more variety to my workouts instead of the same routines for two months.

Dan, Rach, and the rest of the crew were good instructors, although sometimes I thought things moved too quickly to keep up until I got the hang of the moves. They were kind and reassuring for this newbie though. I certainly learned a few moves for myself if I ever got in a tough situation and needed to defend myself. Let’s just hope I remember them at the time!

Although, speaking of defending myself, I definitely confirmed that I’m not — I repeat NOT — a fighter type of girl.

Despite holidays getting in the way, my workout partner going on vacation and a bit of illness encroaching on the 60-day series, we made it through. And I’m glad it’s over. I have no fight left in me.

Best for: FBGs who enjoy martial arts-style workouts, want to get that sort of a group exercise experience at home and are looking for something to keep them sweating for two months.

Do you like the less structured workouts, or do you thrive on the more rigid ones? Let us know what you think! —Kelsey