Today reader Cortni McGregor shares her recipe for some healthy Paleo chocolate chip cookies! Cortni is a sunshine-loving marine biologist living in Upstate New York. She created her own blog to write about healthy foods, lots of workouts and homebrewing experiments. She is recently engaged and in the process of opening a small-farm hard-cider business. She loves to make healthy treats — and fool people who can’t believe they aren’t full of fat and sugar.
I have been baking up some delicious cookies in the kitchen and these ones are the winner! They’re kind of like a macaroon mixed with a chocolate chip cookie. Except they have no oil, butter, processed sugar or flour added. They are vegan, gluten-free and Paleo. But way more important than all of that stuff, they taste delicious! Actually, they’re almost gone already. Whoops.
Sooo, even though I do CrossFit I have never really gotten into the whole Paleo thing. Many people rave about it, and I have heard good things, but strict paleo just isn’t for me! 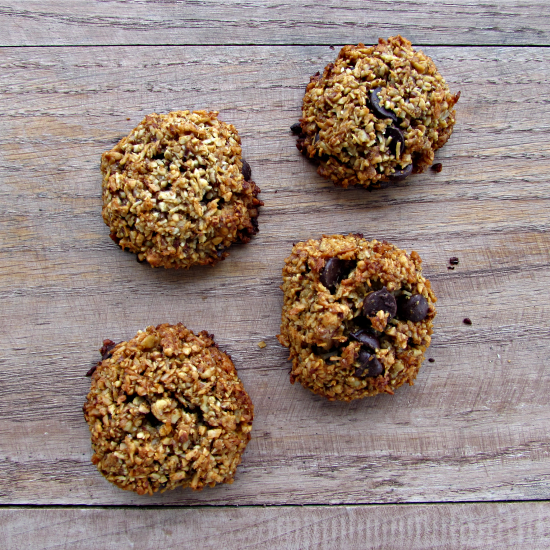 For me, it is quite unsustainable, and it is extremely difficult to eat Paleo if you don’t eat meat. What kind of cavemen didn’t eat meat? I would be kicked out of the cave for sure. So that’s the main reason I don’t eat Paleo — I might starve to death. The second reason is, well, I like to drink alcohol. There I said it. I feel much better now.
I am definitely NOT Paleo perfect, or even close some days. But I wholeheartedly agree with the Paleo approach of cutting out processed foods, shopping the perimeter of the grocery store, avoiding chemically laden foods, and eating real foods with a limited number of ingredients — all of which we would have in our own cupboards at home. Those are the “rules” I try to follow.
I love this excerpt by Sarah on Everyday Paleo:

“What about vinegar, what about sea salt, what about the occasional use of a bit of raw honey, or baking soda, bananas, carrots and coconut milk or God forbid red wine in my spaghetti sauce or a shot of tequila on Friday night?? Did cave people have an abundance of this stuff? Most likely not but they also lacked cars, farmers markets, and Trader Joe’s, and the last time I checked, I do not carry a club, wear antelope hair tunics, or greet my children with an UGH in the morning (unless I haven’t yet had my coffee). We could argue and debate for hours about how yams are a good source of carbs for post-workout recovery meals (and healthy kids should eat them whenever), how baking soda is found in nature by mineral springs and is helpful in regulating blood acidity for endurance athletes, how vinegar probably won’t kill you if you toss some on your salad now and then, or that bananas, although of no real nutritional value, are nice to have around in case you are hankering for something sweet and it’s a better option then — oh I don’t know a donut??” 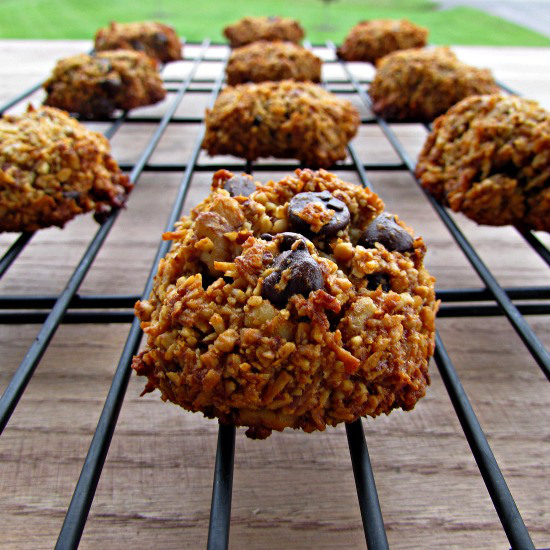 So this Paleo coconut chocolate chip cookie recipe is the better option for your sweet-tooth craving. Because we all get them, and I’m pretty sure you’re lying if you say you don’t (and I don’t know if I believe that cravings only last 10 minutes). These Paleo Chocolate Chip Coconut Cookies will satisfy your sweet or chocolate craving. They are delicious, and pretty close to being Paleo. Yum!

Save Print
Paleo Coconut Chocolate Chip Cookies
Author: YakkaFit
Recipe type: Dessert
Cuisine: American
Prep time:  6 mins
Cook time:  12 mins
Total time:  18 mins
Serves: 1½ dozen
Want something sweet that isn't terrible for you? Paleo Coconut Chocolate Chip Cookies to the rescue!
Ingredients
Instructions
Notes
You must use unsweetened coconut otherwise the shredded, sweetened kind doesn’t soak up enough moisture and the cookies are pretty gooey. If this happens, you can add a bit more almond flour. I use more of a dehydrated, unsweetened coconut rather than the flakes, but any unsweetened variety should work great!
3.2.2708
These cookies come out chewy and delicious with chocolate melting out the sides. They’re messy, but so good. I even had one with coffee for breakfast this morning (shhh … don’t tell!) and my fiance didn’t even know they were healthy — usually he asks first thing, then tries to avoid eating them. This time he dove right in, and loved them enough to take three to work this morning! Score! Healthy cookie that doesn’t taste like it, even to my man with quite the sweet tooth. 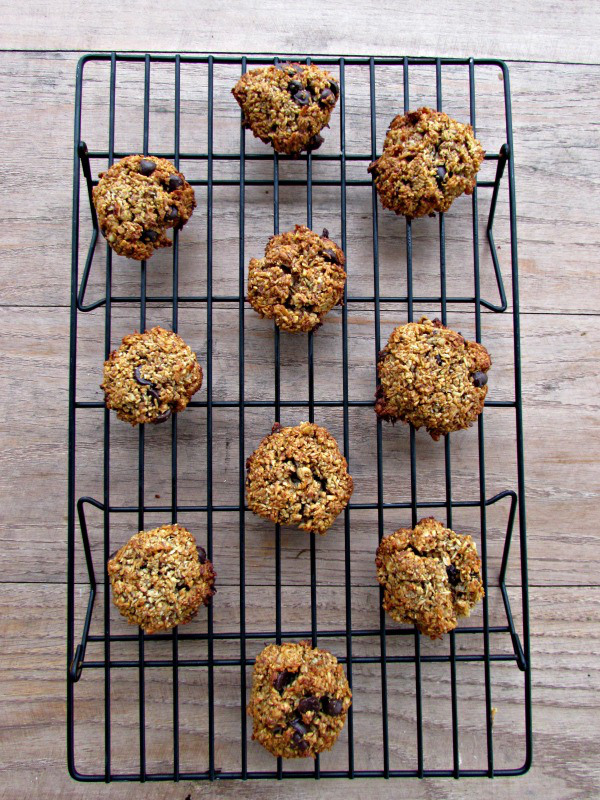 I have found that using almond flour can get pretty expensive, so I like to make my own. All you need is a high powered blender or food processor (A Ninja Blender is amazing!). Buy unsalted, blanched or dry roasted (not just roasted) almonds in the bulk section of the grocery store, or the baking aisle. They are usually much more affordable there than from the snack/nut aisle — if there is such a thing. Pour them in the blender and pulse for a few minutes. Voila! Be careful not to overblend them, otherwise you will end up with almond butter which is alright, too, but I don’t think it would work well for making cookies. The almonds will go through a chunky, then floury stage, you want to stop before they get to the creamy buttery stage.
What do you think of the Paleo diet? Have you ever tried eating this way? —Cortni
New Fitness
New Mamas
New Eats
New Zen
Free Email Course
Take the FREE 5-Day FBG Reset Email Course