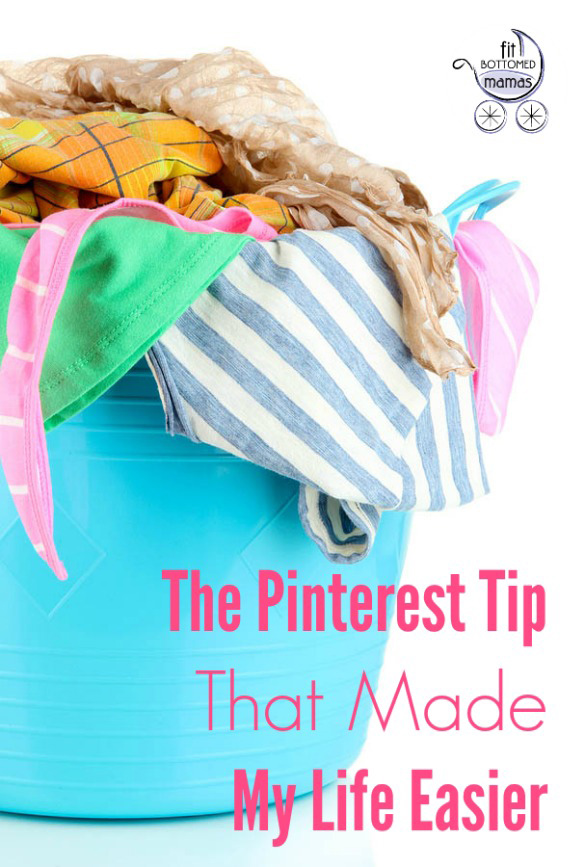 When I had my first child, my laundry tripled. When the second was born, it somehow quadrupled from there. And then the third was born, and between spit-up on both of us at all times and bigger kids who love the multiple outfit changes a day, I figured there was no hope for me at all and I would forever be drowning in laundry. I was so sick of never being “done” that I tried to keep laundry to one day a week. That way I knew that day would involve a lot of up and down the stairs but the majority would get done. But that would lead to all of the clean laundry sitting in my bedroom, waiting to be folded. And if I got busy (which, always), it would sit there until I was forced to do it because the next laundry day had arrived or someone ran out of underwear. Then I tried the method of just always doing laundry all the time, but it always inevitably piled up in my bedroom.

So I was on Pinterest the other day when a post caught my eye. It said something like, “Laundry: You’re Doing It Totally Wrong (You Moron).” My curiosity got the best of me, and despite an aversion to most Pinteresty things (I do not excel at the cuteness typically), I clicked. The article said that to make your life easier, you should sort laundry by people, not by color. Don’t worry about whites and darks, it said, just throw everything in there, fold the clothes on the person’s bed and you will magically be a laundry genius.

I used to employ this laundry method when it was just three of us. I kept my oldest daughter’s laundry separate because I used special detergent until I determined that she didn’t have sensitive skin, but after that I just started dumping everything in by colors. It was nice to not wait an eternity to wash a single red shirt of mine because I always had a pink load going for my daughter. But this post made me wonder if I was doing it all wrong, so I decided to give it a shot.

Now, if you want to employ this method, don’t expect miracles. But after a few weeks of trying it, I will say that it has made things run more smoothly than before. There is a significant amount of time spent pre-sorting. Rather than easily grabbing colors, it does take a little big longer to sort clothes by person. Is that an itty-bitty baby sock or a just a small 3-year-old’s sock? Is that girly pink shirt an infant one or the older girl’s? But the payoff to the pre-sorting is that once you have a dry basket of clean clothes, you know they belong to one person. And here is where it pays off big time. Once that load is folded, you take it to the right dresser and unload it all in one fell swoop. No more baskets that require trips to each bedroom to empty. The days when laundry just sits in my bedroom waiting to be put away are now quite rare, thankfully.

The only other drawback I’ve found to this method is that you might run low on socks or underwear for a particular person before you have a load ready to go for them. But that’s probably more a quirk of my family because the 3-year-old prefers not to wear a pair of underwear for more than 10 minutes so they’re always missing in action and end up in the laundry room. We also had a problem with my husband’s jeans — they turned from a dark wash to a gray — but I found out later that they were supposed to be turned inside out (not to mention that they were also washed in warm water — glad I didn’t do it!) I would probably wash new items separately the first time, but other than that, I’m a convert to the system. It might not make less laundry, but if it’s not hanging out in my room for a week, I consider it a victory.

Do you employ the By-the-Person laundry system? Do something else genius entirely? I can’t wait to be like, “Okay, you’re tall enough to reach the controls; it’s all yours, suckers!” —Erin