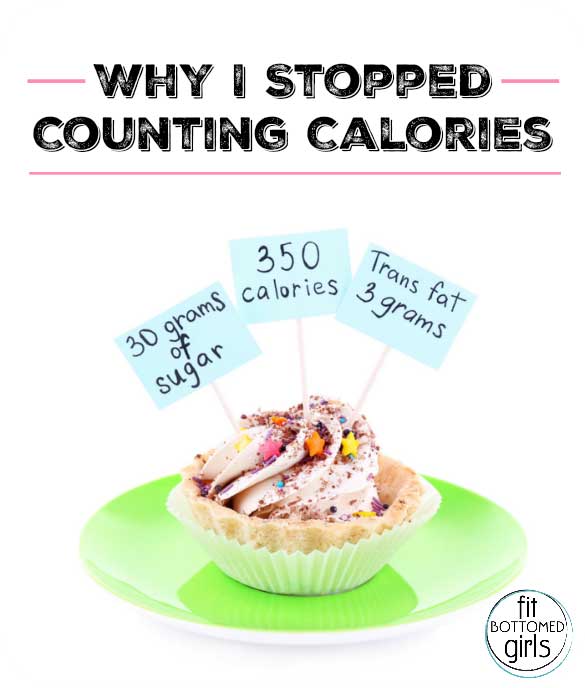 I’m sure you’ve heard of the elusive calorie deficit — you know, calories in minus calories out — the Holy Grail of weight loss. But as elementary as this magical mathematical equation may seem, I’ve learned that there’s a seriously dark side of counting calories that’s not often discussed.

My first attempts to solve for “x” began at age 13. It’s funny but I don’t recall ever worrying about my weight until I actually started counting calories.

Over the years that followed, I tried attacking this problem from both sides — restricting what I ate (calories in) and chasing the burn (calories out). Here’s what happened:

The Problems with Restricting Calories In

I became obsessed with food. Food was seriously all I thought about. I became fixated on my next meal, often watching the clock and counting the minutes until I could eat again. When I wasn’t thinking about food or eating micro meals of “low-fat” and “low-calorie” chemical-laden food imposters, I was adding up the calories in those meals. It was a full-time job.

Eating was stressful. I’d plan my meals out days in advance and if my husband decided he wanted to eat out, total calorie allotments had to be rearranged to accommodate the change … UGH! And before I could take a bite of anything, I had to know the exact portion size to determine the calorie count. Quite frankly, it was maddening.

I developed an unhealthy relationship with food. I was unsatisfied by the foods I ate so I craved more. Then, I began to associate satisfaction with a quantity of food that I wasn’t allowed to have — therefore, satisfaction seemed unattainable. Food became a double-edged sword.

The Problems with Chasing The Burn

I began to view exercise as a punishment for eating. When I screwed up the “calories in” side of the equation (which I was really good at), I’d balance it out on the “calories out” side. So I only really had to work out if I was “bad”. Working out really sucks when you’re beating yourself into the ground to make up for what you’d eaten in the past few days.

I’d chose workouts based solely on calorie burn. I knew that high-intensity-interval-training (HIIT) classes burned the highest number of calories. So I did them seven days a week, exchanging the workouts that (a) helped me reach my own goals and that (b) I actually enjoyed — running, yoga and strength training — for maximum calorie burn. Before long, I was totally burnt out, injured and drifting further away from my goals.

My calorie deficit cost me more than just fat. Every time I cashed in a muscle-building strength workout for more HIIT, I wasn’t just burning fat — I was torching muscle tissue as well. BIG MISTAKE. My metabolism tanked, my strength and stability began to evaporate, and I ended up with multiple stress fractures in my right leg from all the balls-to-the-wall HIIT … awesome!

I was missing out on the benefits of other activities. Over time, it became more difficult for me to recover in between those high-intensity workouts and my resting heart rate began to rise. Turns out, the substantial reduction in running (steady state cardio) was decreasing the efficiency of my heart, making it tougher to recover.

I overdid it. A deficit of 250 calories is great but 600 is even better … NOT! I’d work out multiple times per day at the highest possible intensity to maximize the burn. Coupled with a calorie restriction, it was a recipe for disaster.

Looking back now, I can clearly see that I’d implemented an extremely unhealthy grading system for my life. The reality is that I could’ve had a fabulous day — received a promotion, gotten married, won a Nobel Prize — but if I blew my caloric allotment for the day, I was angry with myself.

For years, I dwelled in this land of hopelessness until one day I decided to stop the insanity. Now, at age 35, I no longer care about calories in or out. I eat real food when I’m hungry and I do workouts that help me reach my goals and don’t make me miserable. I’m now happy, healthy and in the best shape of my life.

With all that math gone now, I’m able to focus on what’s good for my body and mind, and when my dear husband sends me a Death By Chocolate gift basket to let me know that he is proud of me, I don’t get all bent outta shape and angry at the poor guy or even feel bad if a large portion (or the whole thing) ends up in my belly.

What are your successful long-term strategies for weight maintenance? Please share! —Alison