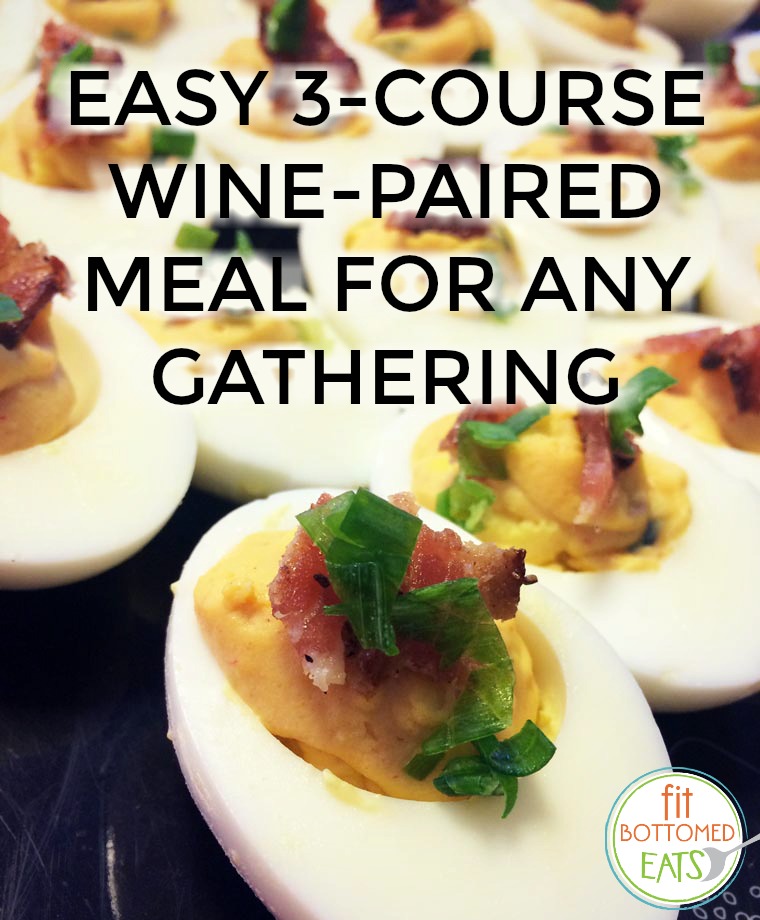 Every year, my husband and I host our closest friends over for what we like to call Friend Feast. If you’ve been reading FBE for awhile, you might remember last year’s, the year before that or even the year before that. And each year we tend to go with a different theme or feeling. Some are fancy. Others are centered around an ingredient (I’m looking at you mushrooms). And some just feel right. Go ahead and put this year’s Friend Feast in that latter category. Because everything about this three-course wine-paired meal was right. (And, it was actually pretty easy to do, I swear!)
Not overly fancy by any means but still with some refinement of flavor and style, this feed-a-crowd wine-paired meal (by me) and/or beer-paired meal (courtsy of my beer-loving friend and guru Jim of KC Beer Scouts) was maybe my favorite Friend Feast of any year thus far. And not just because the weather was beautiful. Because, the weather was so beautiful, we sat outside. In late November. 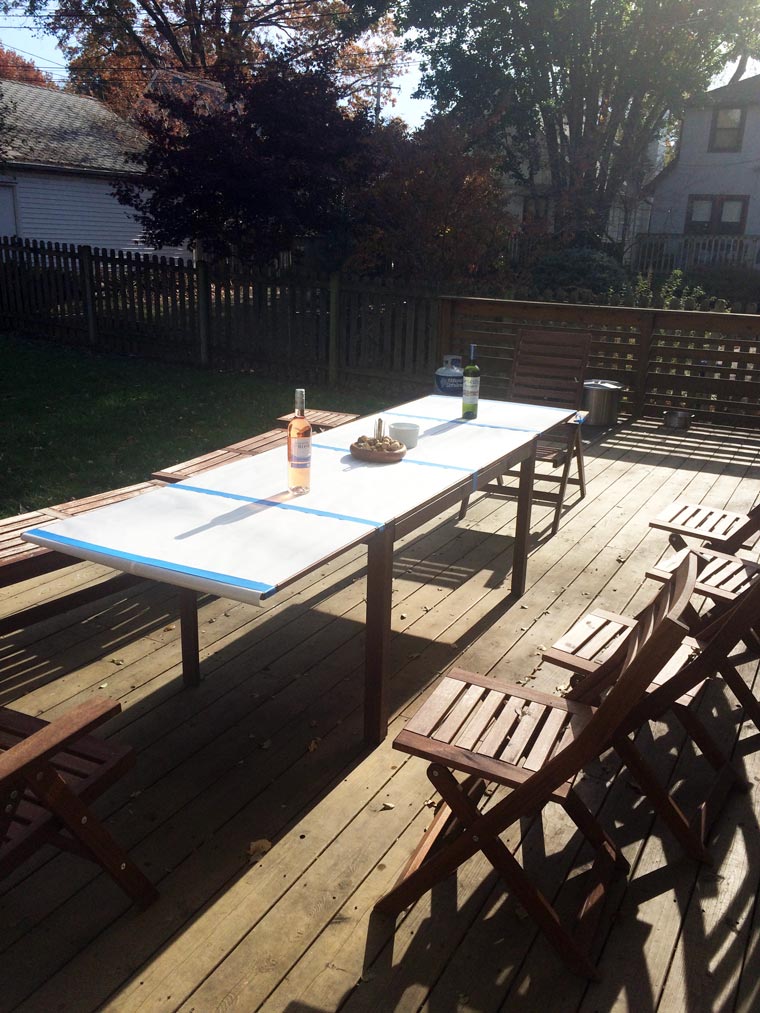 Now let’s break it down, course by course … 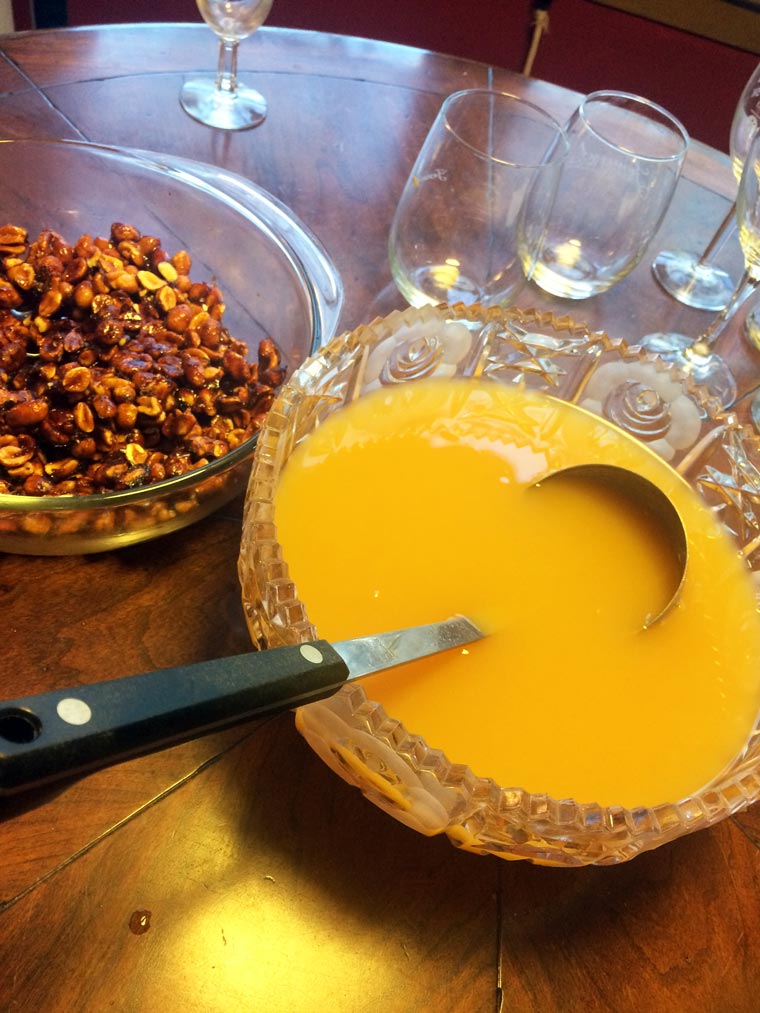 We kicked things off with a cocktail and some nuts that our dear friend Katrina brought. Because, why not? My husband and I are kind of obsessed with Fogcutters. So we made a giant batch that serves a crowd and put it in a punch bowl of my grandmother’s to get the party started. It’s a fruity and fun cocktail that’s pretty heavy on the booze (hence the small glasses). I’ll share the full recipe later this winter when you’ll really want a tropical drink to warm  your bones and remind you of warmer weather, but let’s just say a lot of everything is in our version of it, including: vodka, gin, rum, brandy, pineapple juice, orange juice, cranberry juice and grenadine. Um, yeah. 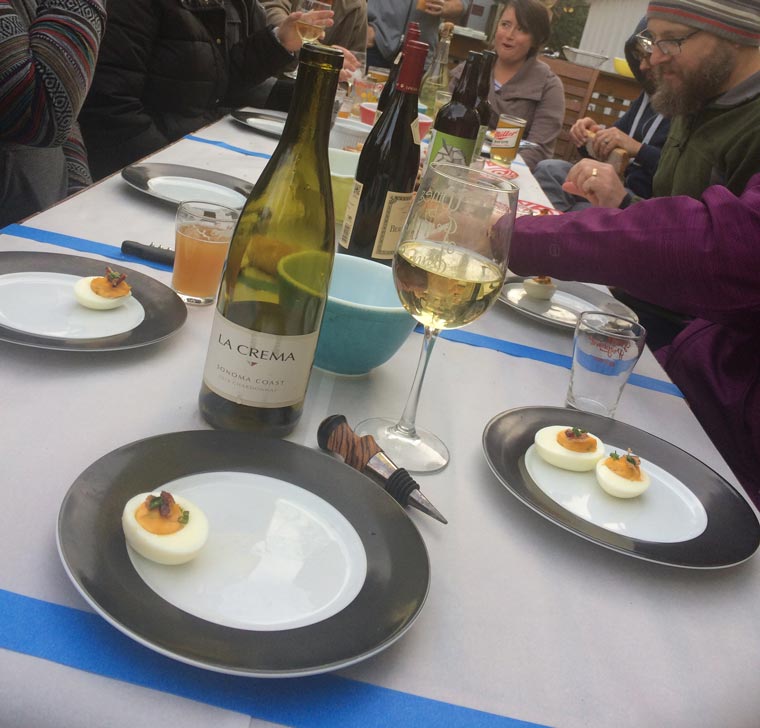 Everyone loves deviled eggs. And this fancied, kicked-up recipe from La Crema fit perfectly in with our main course. As suggested, I paired them with La Crema Chardonnay and the pairing was on point. The chardonnay was creamy without being overly buttery or too heavy on the oak. It worked beautifully with the eggs. Jim paired the eggs (rather deliciously from what I heard) with Farmhouse IPA from Crane Brewing in Raytown, Mo.
A few important notes on the recipe: I did darn near triple the sriracha to get a bit spicier taste (otherwise you could barely taste the sriracha). And, I would not recommend their method for hard-boiling eggs. We had a hell of a time peeling them. And by “we,” I mean my husband. (I ruined a couple and was quickly moved to other Friend Feast duties.)
That all said, these made for a fabulous small yet mighty first course. 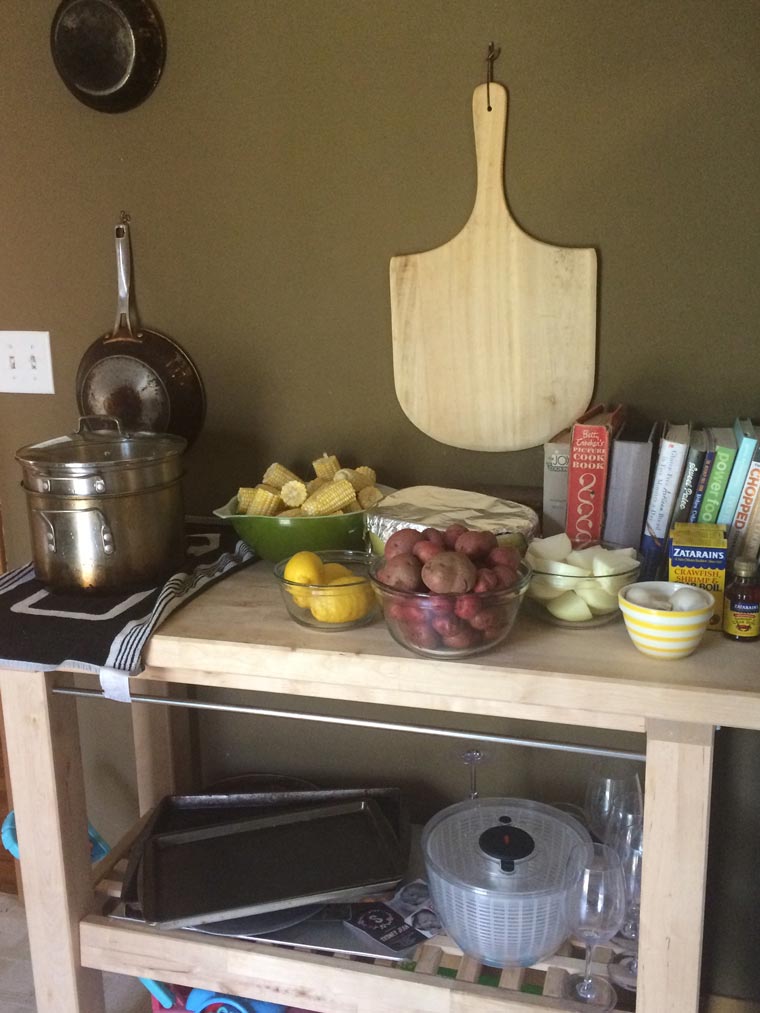 My parents lived in New Orleans for five years and talked about how awesome their neighbors’ shrimp and crawfish boils would be. And, I’d always wanted to go to one, but somehow the foodie stars never aligned for me to go when I was in town. So, when my husband suggested we do a shrimp boil as the main course (and obviously, everything around it was designed to support it and go along with it), I was ALL IN.
Now, the basics of a shrimp boil are pretty simple. We followed Skip to My Lou’s recipe and it was perfection. Honestly, perfection. We used a lot of Ryan’s beer-making gear to do our boil. And a cooler. Beacuse, damn, it’s a lot of food. 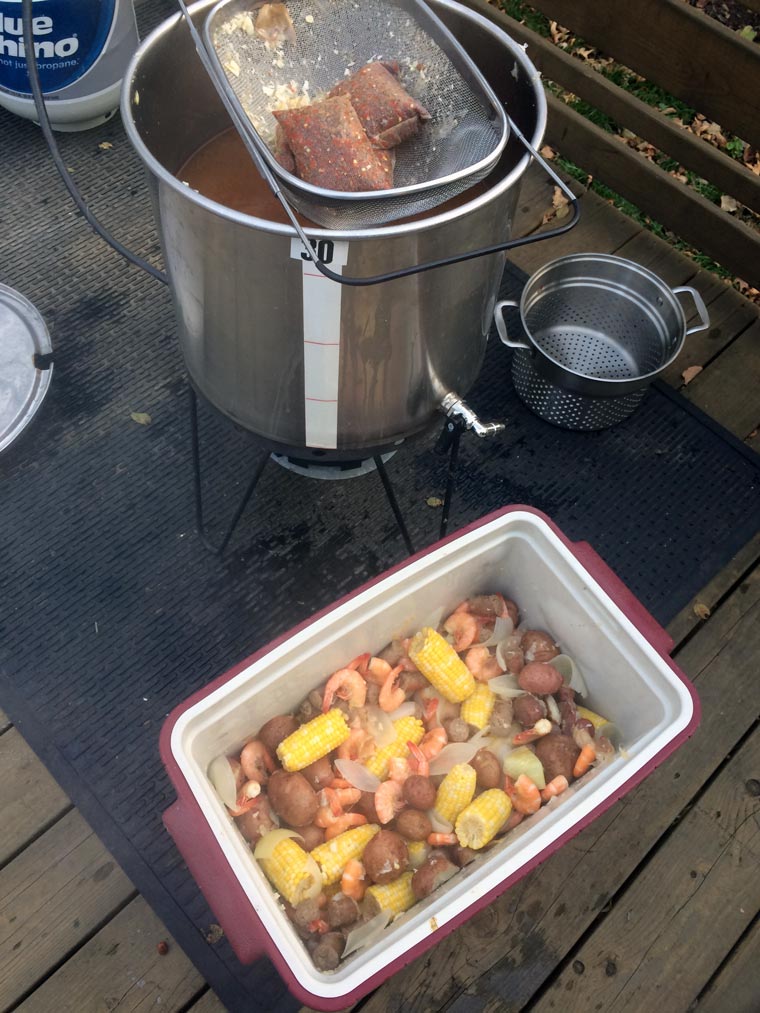 And in traditional shrimp boil style, we poured it all out on the table. I may have not had a more enjoyable dinner at my home, ever. 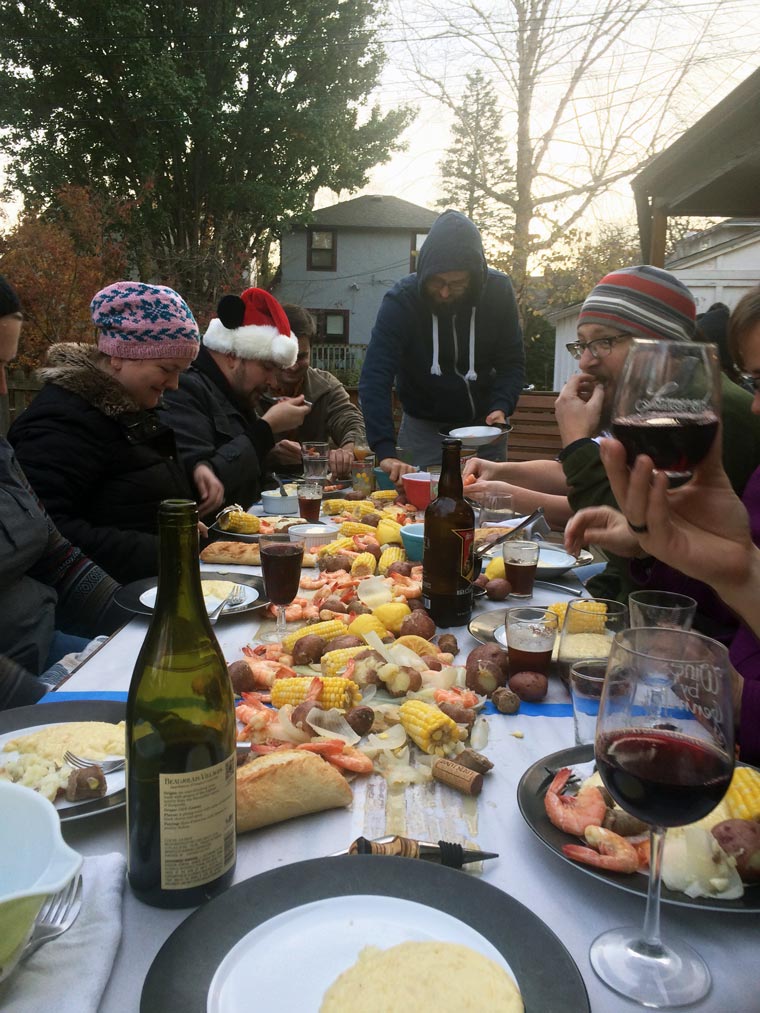 I paired this with the pretty well-known Louis Jadot Beaujolais-Villages. A little fruity and spicy but quite light for a red, I chilled it slightly before serving and the table drank all three bottles easily. (We also ate everything but two potatoes, one piece of corn and four shrimp, so success.) Jim went with Prior 8 (a quadrupel) from St. Bernardus, Watou, West Flanders, Belgium, to rave reviews.

When the invited group learned that we were doing a shrimp boil and a kind of cajun theme, my friend McKenzie suggested doing bananas foster. Which I thought was brilliant. But I also wanted to do a bread pudding. So I found the perfect recipe that combined them both: Bananas Foster Bread Pudding. And it lived up to the hype. 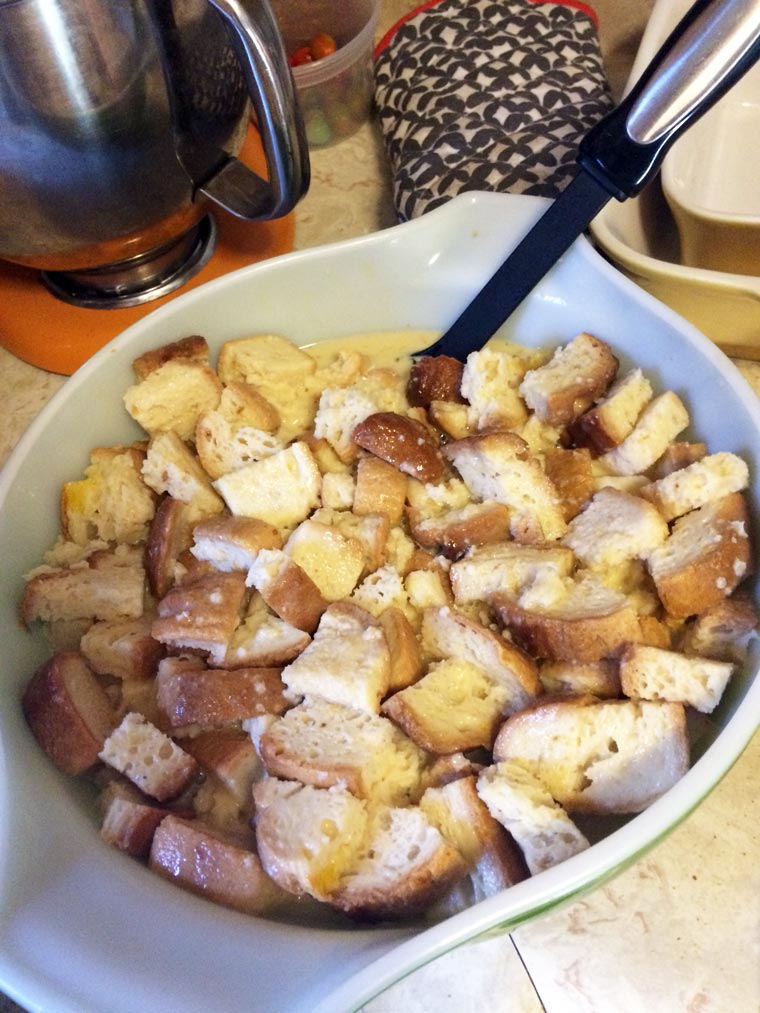 Ridiculously easy to make, I subbed brioche for gluten-free bread. And even made it ahead of time and just kept it warm (including the rum sauce which was basically like crack). Paired with some vanilla ice cream, it was amazing. And we were having so much fun that I forgot to take a photo (I blame the fogcutters). So I stole this Snap from my friend Tessa. (I’m glad she enjoyed it, too. And waited for silverware — we clearly need a bigger dishwasher!) 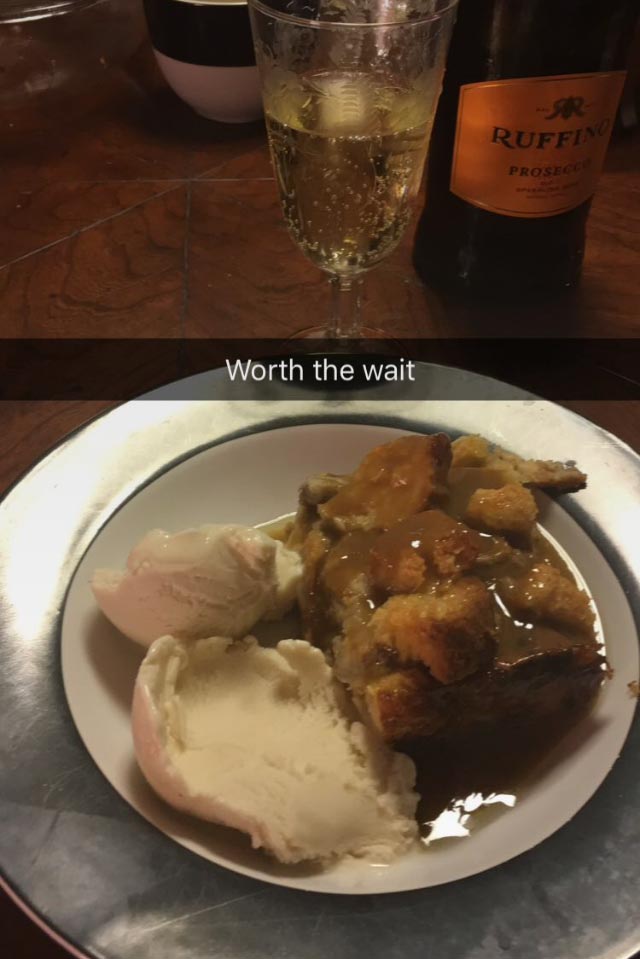 Jim paired dessert with Aventinus from Schneider & Sohn, Kelheim, Bavaria, Germany. And I’ve been on a huge bubbly kick lately, so, of course, I paired this one with a light and slightly fruity Ruffino Prosecco. 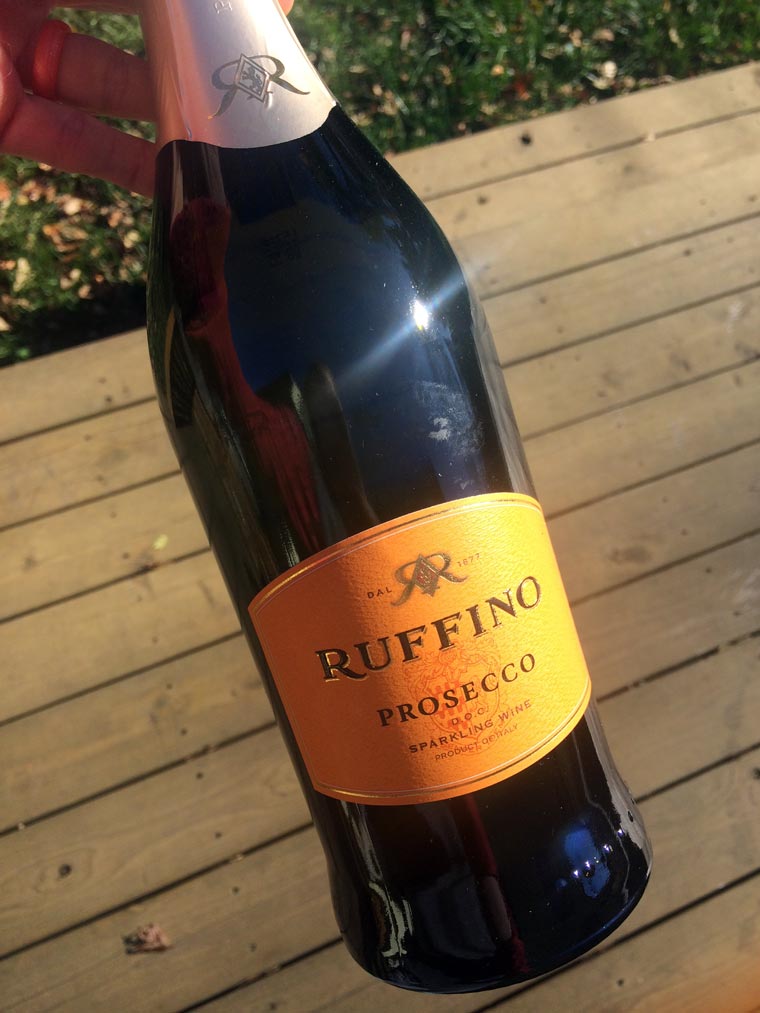 Perfection for an awesome celebration with friends.
Now the only question I have is: How will we top this next year? Seriously. I need ideas! —Jenn