On Thanksgiving, my husband and I got up early, dressed in our warm running gear and headed out to a nearby Turkey Trot. Parking was limited so we arrived early and camped out in the warmth of our car for 45 minutes before we had to walk to the starting line. As we were standing there freezing during all of the pomp and circumstance waiting for the race to start, we had that thought that people have when they’re freezing their butts off in the cold when they could be enjoying a warm cup of coffee at home:

Why are we doing this again? 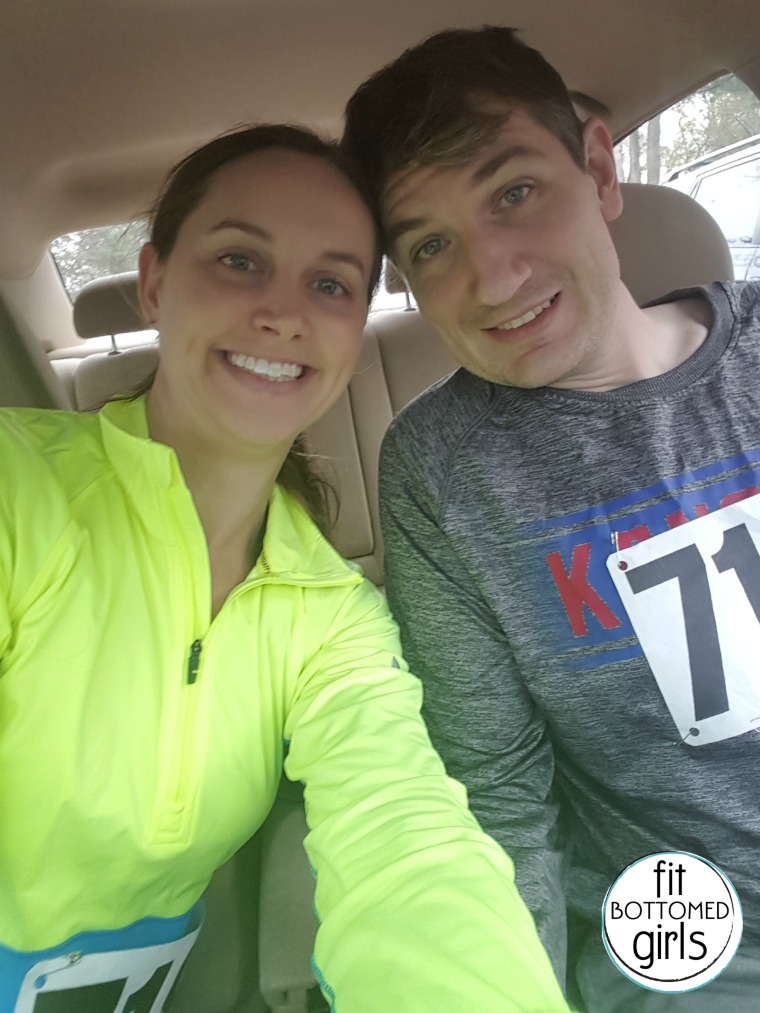 Alan and I had agreed that if either of us wanted or needed to leave the other in his or her respective dust, that was A-OK. But my TomTom watch strap is broken, so as I was waiting for a replacement, I was running without a watch or data (the worst, btw!). I wanted to stick with him just to keep track of our time, but it turned out that I wouldn’t have been able to leave him in my dust had I wanted to. In fact, unlike the half marathon when he was struggling, I was the one who was huffing and puffing. I was not anticipating the hills. The. Hills.

The race started off on a long, gradual downhill trajectory, which meant that we started out fast. Then we had to double back up that long, gradual uphill. Once at the top of that, we had to go up a steep uphill. It was short, but the steepness combined with the climb that we’d already tackled had me huffing and puffing. Once I regained my breath, I asked what our distance was at that point: “About halfway,” said Alan, whom I later found out was messing with my mind on purpose. He knew I was struggling, and I think he thought it was a little funny to keep our exact mileage of 1.4 miles a secret. At this point, I began to feel like I couldn’t breathe — my mouth was dry, my throat was thick and gunky. Then I saw a water station, but we had to do an out-and-back before we hit it. It was a huge relief to be able to grab a swig of that cold water.

After that, we got to go down the steep uphill in the other direction and then back down the long gradual decline to hit the end. A couple of times we heard, “Go turkeys!” directed at someone behind us and didn’t think anything of it. Then, as we were steps from the finish line, we heard it again as two people dressed as turkeys blew past us. Our time: 28:03. Our only regret: Not knowing the turkeys were behind us. Who wants to get beat at the last second by turkeys?

Once we were done, we both had the same thought: This is why we were doing this. Sure, it’s only a 5K, but it’s still a feeling of accomplishment. You’re still getting out and enjoying the day, fitting in some exercise on an otherwise gluttonous day. (The Bloody Marys we had afterwards didn’t hurt either.)

Even though it was a hilly challenge and Alan set a quicker pace than I would have done on my own, we had a great time. And I was reminded that even if it’s a short race, it’s the pace (and the hills!) that can make it more of a challenge than you anticipated. I was also reminded that you might think you’re faster than your husband, but on occasion you might be surprised and struggle to keep up!

Have you ever had a short race that felt more difficult than a long race? I never knew 3 miles could feel so long. —Erin