Folks have been plotting vacations around wine since, well, pretty much forever — something to which Jenn can clearly attest — but I know more and more people who are doing the same thing when it comes to craft beer. I spent a day in Portland, Ore. (after this race … and subsequent wine tastings) checking out the beer scene (and falling in love with Cascade Brewing, which is a must-visit if you’re a fan of sour beers, because they are the pioneers of that movement), and I have a few friends who’ve visited places like Asheville, Grand Rapids, and Boise.

And now, looks like you can add Roanoke to that list. Turns out, Virginia’s Blue Ridge is not only a hiker’s dream, but it’s also a beer lover’s paradise, as I learned earlier this month when I was invited to join a press trip to the region. (As is always the case with trips like these, although my travel and meals were covered, all opinions are entirely my own.)

In addition to conquering two thirds of the Appalachian Trail’s Triple Crown (and yes, you’re definitely gonna get all the details on my hiking adventures later), I also managed to scope out quite a few of the area breweries. A writer’s work is never done, you know? 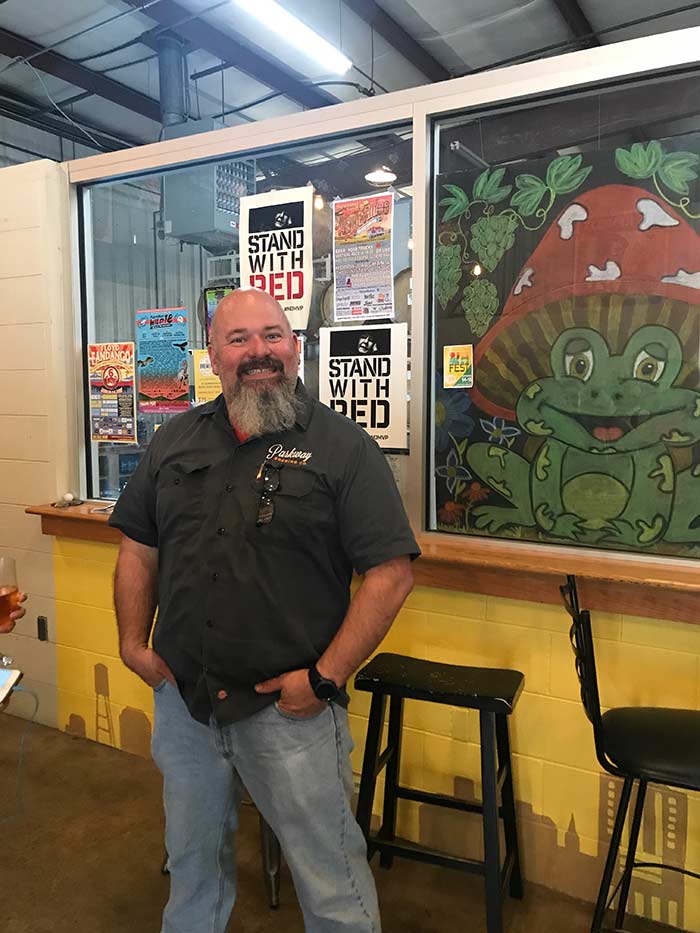 Located just about 10 minutes from the McAfee Knob trailhead, Parkway Brewing is a perfect post-hike stop. But you don’t have to be a hiker to find your tribe here — the brewery also caters to runners with a weekly run (on Thursdays, I believe, but you’ll want to check with them for details), has live music, trivia, and loads of space to sit, sip, and chat, both indoors and out. Oh, and the beer! They’re best known for their Get Bent Mountain IPA (and if they have the grapefruit or orange versions, they’re must-tries), and their Majestic Mullet Kölsch is also popular — and not just for the great name. I opted to try their Breath of Life Honey Wheat Ale, which was part of a collaboration many area breweries participate in annually to support cystic fibrosis research. Each brewery was asked to create their own beer using Virginia oats and local honey, and this one was definitely a winner. 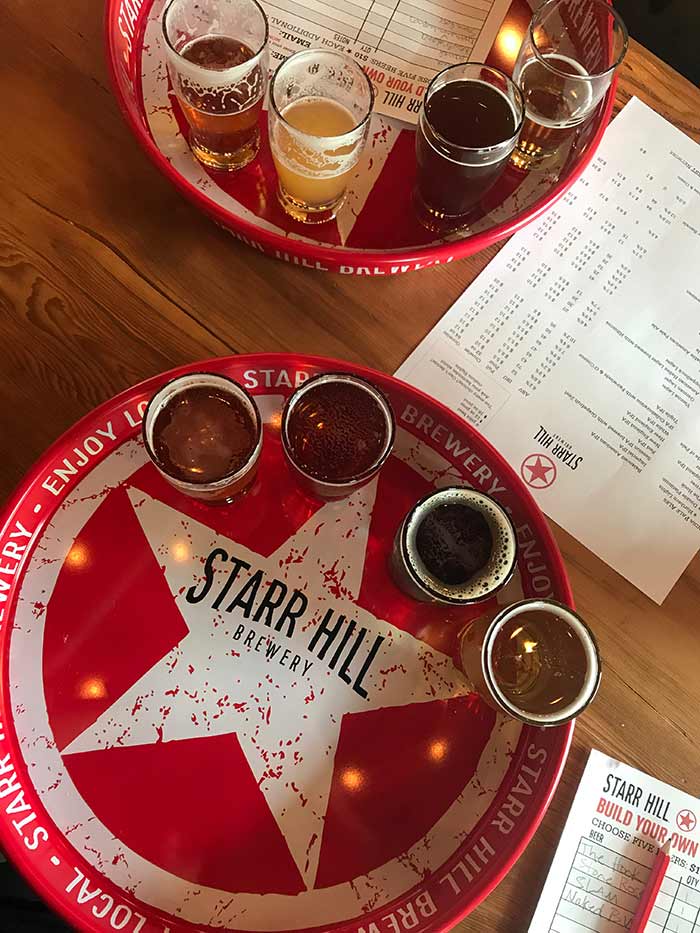 Starr Hill is the second oldest craft brewery in Virginia, and it might be as passionate about music as it is about beer. (In fact, you might’ve come across the label at live music festivals like Bonnaroo or FloydFest.) I visited the Roanoake location, which is where you’ll find some pilot beers (and you can provide feedback) and, of course, catch a live band or two. I only had time for a quick tasting, but quickly found two standouts among their pilot beers: SLAM!, a dunkelweizen with truly rich and complex flavors, and Naked Berliner Weisse, which was light and tart and super refreshing. 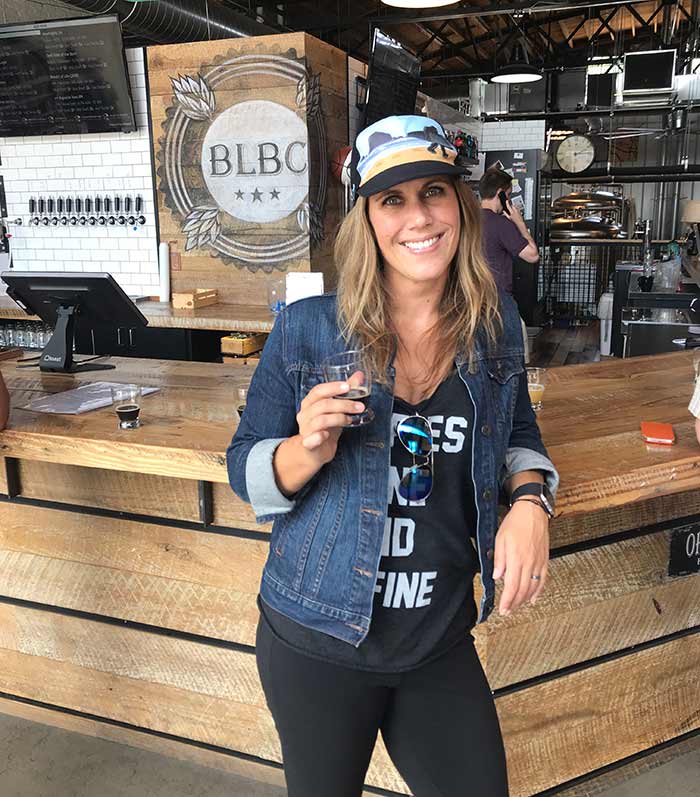 Looking for a gorgeous spot to try interesting brews and maybe snap some shots for Instagram? Big Lick is the one for you. It’s a stunning building on the inside, and the outdoor patio with twinkle lights, fire pits and a huge mural is just as spectacular. Trust me when I tell you to try the Chai This Milk Stout — it’s everything you love about chai and about stouts, all in one. I was also pretty blown away by their barrel aged brews, and if you’re a whiskey fan, be sure to sample the She’s A Beauty (Bulleit Rye Whiskey Barrel Aged). 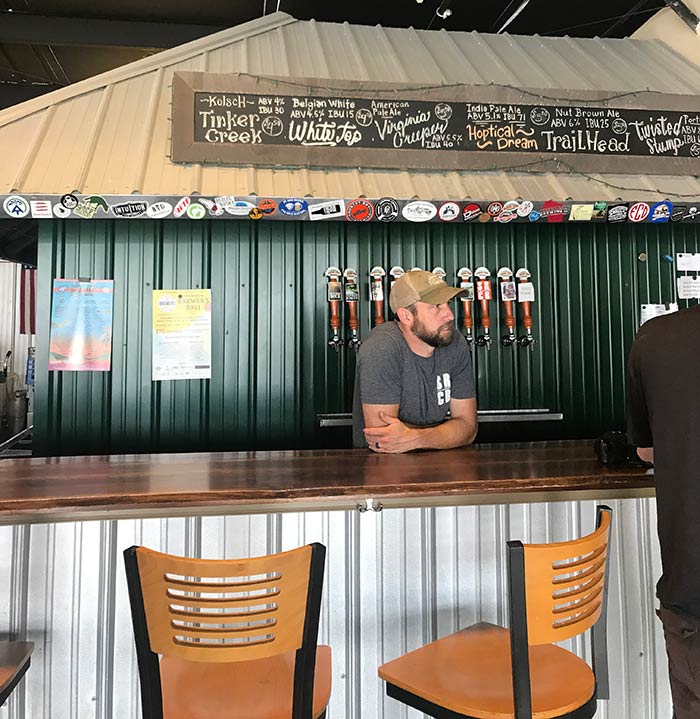 If I had to choose one Roanoke brewery at which to spend the whole day, it would probably be Soaring Ridge. It’s another comfortable indoor/outdoor space, and the vibe couldn’t be more laid-back. They’ve got a ring toss game set up and ready to go, and you can also play cornhole (or, “throw bags,” as I’ve been told the serious throwers say). Ask for a Sundown Shandy, if they’re pouring it (it’s seasonal); otherwise, strike up a conversation with the friendly staff behind the bar and let them lead the way. 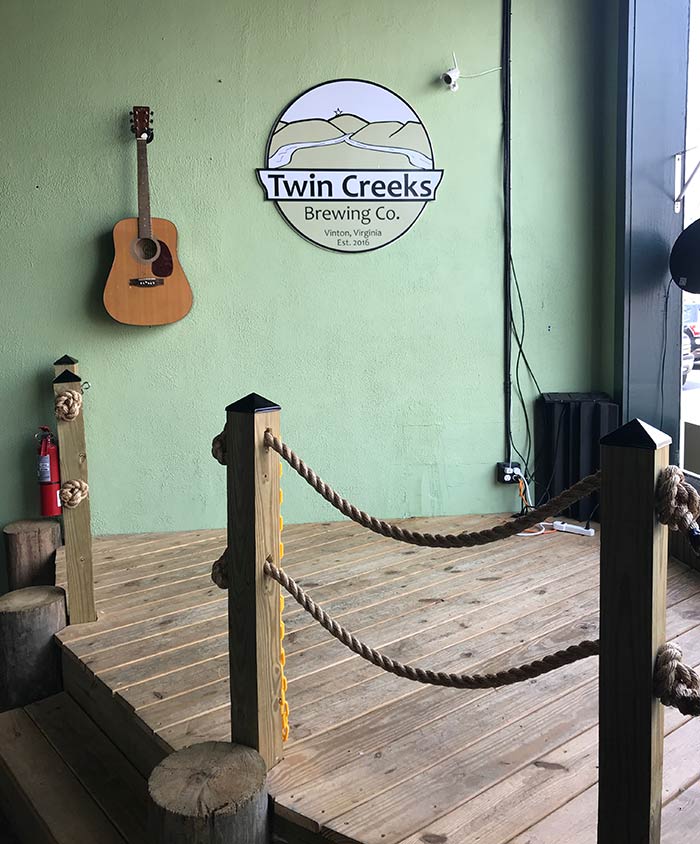 When asked for their origin story, the founders of Twin Creeks just laugh and say, “Honestly? We love beer!” They started out home brewing, continued to improve their skills and recipes, kept adding newer and better equipment, and in 2016, they opened the doors to the first microbrewery in Vinton (which is right in the Roanoke area). They’re serving a few award-winners, but my pick, hands down, was the Across the Pond Brown Ale. 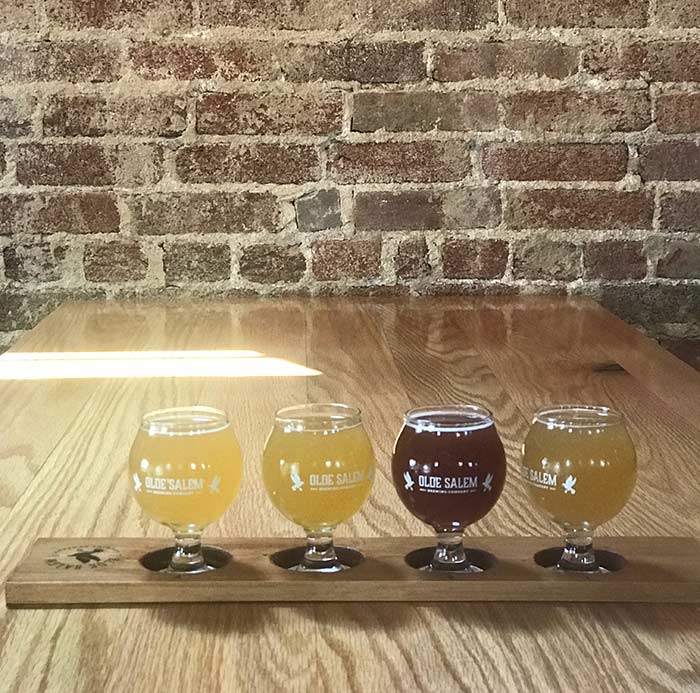 Salem is probably most well-known as the home of Roanoke College, but I have a feeling they’re going to be seeing a lot more beer tourism come their way now that Olde Salem Brewing Company has claimed a spot on the main drag. An impressive remodel (which uncovered some gorgeous windows, giving the huge space fabulous lighting) created a huge, open space where beer lovers — and afficionados of fruity and sour beers in particular — can comfortably gather. They only opened in November 2017, but are already looking at creating an outdoor space and maybe even a rooftop in the future. Olde Salem had only just released a couple of barrel aged offerings, including a Chardonnay Barrel Aged Colorshow Sour Ale With Apricots, which I could’ve enjoyed all day long if I weren’t so busy sampling so many other interesting options, like Forever Young Tangerine Berliner Weisse and Heartbroken in Disrepair Raspberry Wheat. Every beer is named for a song title or lyric, and while you won’t earn any free suds for naming the song and artist, you will earn mad respect. Be on the lookout for some heavy hitters with big hops or high ABV coming soon, because while they’re passionate about sour, tart and fruity, their brewer is also extremely interested in the high gravity drinks.

Now, try as I might, I just couldn’t get to every brewery in the area — at least, not if I wanted to get in a bit of hiking as well. Happily, a few of my fellow journalists had the opportunity to check out some others, and I’d be remiss if I didn’t mention the following:

Ballast Point, which is a San Diego brewery that’s now opened in a few other states, including Virginia. This is the place to be if you’re looking for landscape views and a huge variety of beers on tap. While many of the other breweries have food trucks on property or work with local restaurants on delivery, this is one that serves its own food.

Flying Mouse Brewery focuses on pairing good craft beer with an active outdoor lifestyle, so be prepared to see some serious cyclists (the TransAmerica 76 Bicycle Route goes right by their driveway) and maybe an AT through-hiker or two (the Trail is just a short distance up the road). They offer limited edition brews and name them simply (Flying Mouse 1, Flying Mouse 2, Flying Mouse B, etc.), in an effort to make it easy to go from light to dark (and help people remember what they ordered and liked). Also? The story of their mascot, Bartleby Hopsworth, is adorable.

Are you into the idea of craft beer-centric tourism? What’s your favorite area to visit, and what beyond beer is there to do there? —Kristen