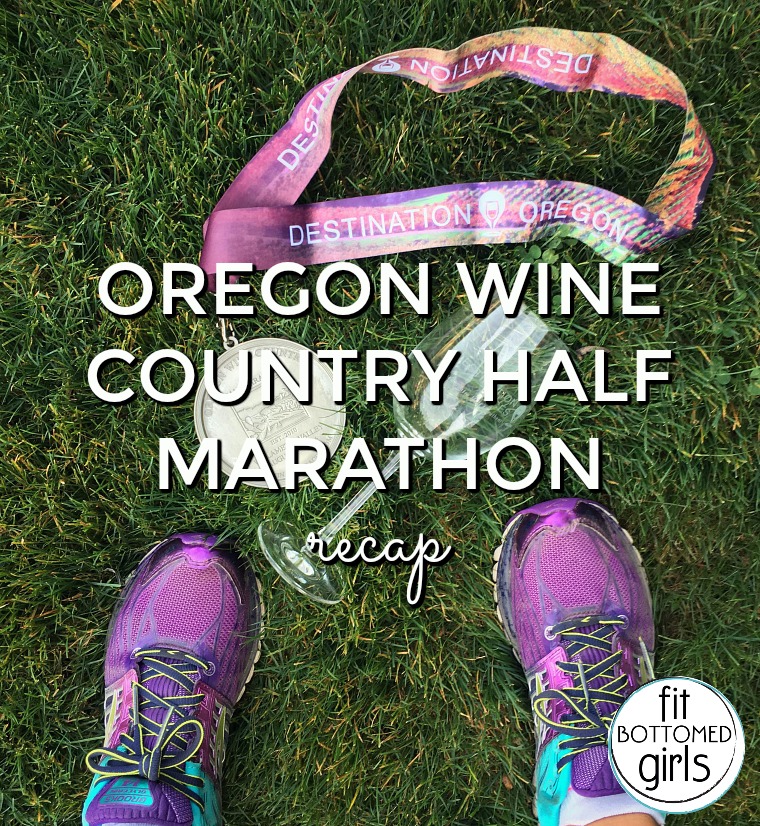 Sometimes, a race is about the amount of time it takes you to go a certain distance.

Sometimes, that number … well, it’s not the main takeaway. Not necessarily because you’ve performed horribly, but because there’s just so, so much more to it. That was certainly the case for me at the Oregon Wine Country Half Marathon.

You might remember that this isn’t the first time I’ve run a Wine Country race. I ran the Santa Barbara race a few years ago, earning a PR and running what I still consider my first successful half marathon. I went with a group of friends and stayed in a lovely vacation rental home and thoroughly enjoyed the area, so, when Oregon came up, I got a few friends together to do it all again. And we definitely did it up right.

We picked up our packets at the Evergreen Aviation Museum (super cool place — I got to walk around inside the Spruce Goose!) and took advantage of the props to take a few fun pictures. You know, like you do. 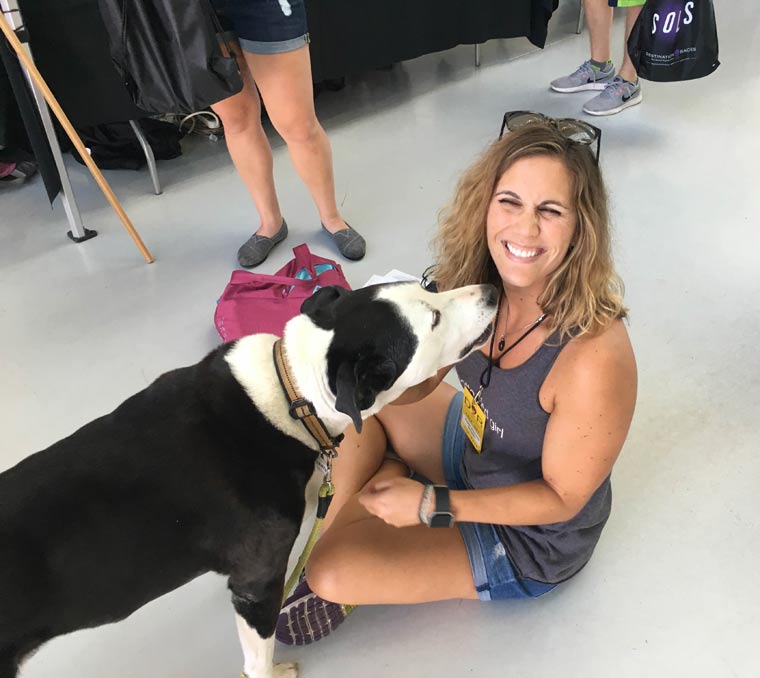 Half Marathon?? Ok, only if it’s in the Oregon wine country and is followed by a big glass of Pinot Noir!! @winecountryhalf #orwinehalf

After we finished up, we kicked things off with the VIP dinner at Sokol Blosser— a gorgeous winery that set the tone for a really picturesque weekend. We sampled wine (not too much, of course — we had a race the next day!), chatted with other runners and ate pasta. We saw a tremendously beautiful sunset on the drive home, so, all in all a pretty perfect night.

Race day began nice and early — something we were thankful for, as the weather was considerably warmer than many of us had been hoping to experience at an August race in the Pacific Northwest. The point-to-point course began at Stoller Family Estate, and although we probably could’ve spent a little extra time warming up, Megan and I thought our time was better spent taking advantage of the sun’s first golden rays hitting the vineyard while playing around with Boomerang since neither of us was really in the hunt for a PR.

Warming it up for a cool 13 mile run ith a little grapevine amongst the grape vines ???? ????: @kgseymour #ORwinehalf @winecountryhalf

Things started off well. I knew I wasn’t as prepared for the distance and hills as I’d wanted to be — I’d gotten in one fantastic 10 miler a couple of weeks before the race, but it had been at a very easy pace on a flat route. Still, I tend to do pretty well on hilly courses, so I figured I’d set off at a comfortably uncomfortable pace and adjust if the wheels began to fall off. I gave myself full permission to walk up any hills I wanted, as long as I took advantage of the downhills and picked up my pace when gravity gave me that boost.

Turns out that, although that’s been a good strategy for me on courses with real climbs, it’s far less effective when you’re running miles and miles of rolling hills. They don’t feel hard enough to warrant walking on the way up, and they don’t provide enough of a decline to give you much help on the way down. They’re just hard.

I stayed on track for a PR for about eight miles, but it was at more of a cost than I’d anticipated. My pacer passed me as I walked up a fairly steep hill, and when the corresponding downhill proved to be a really gentle descent that led into another climb … I knew the PR was out. My legs didn’t have much left so I vowed to just do the best I could, take a few pictures, and try to enjoy the fact that I was in wine country. 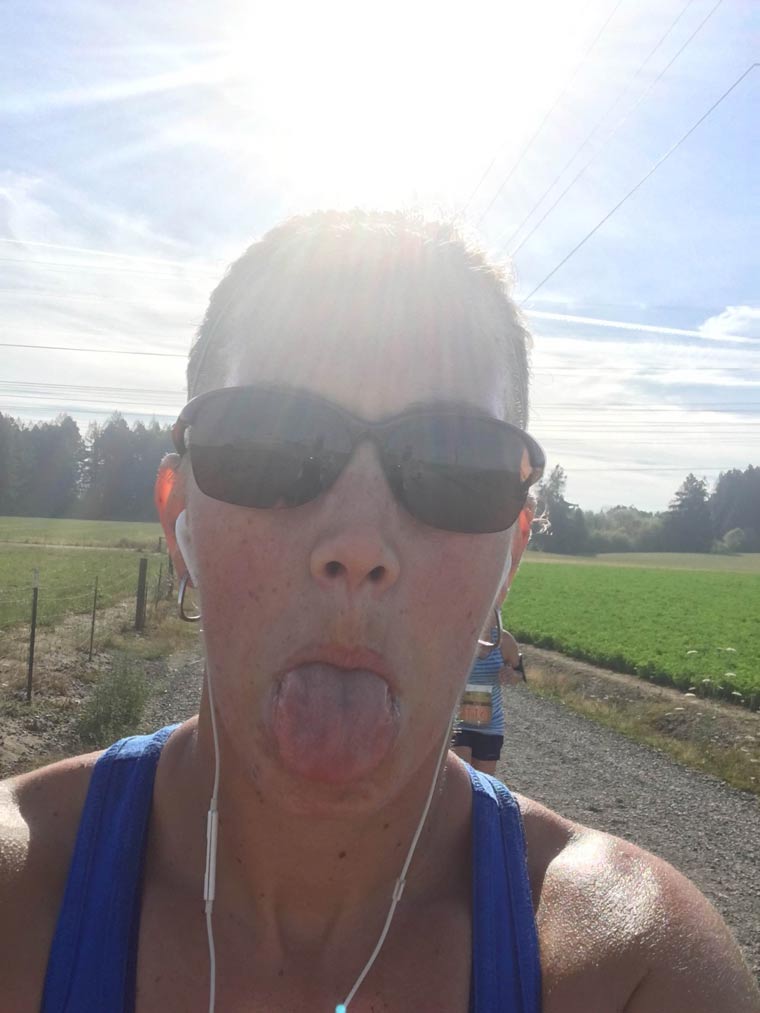 This is my “I’m no longer running very happy” face.

By the time Lora (who’d finished about half an hour earlier — so speedy!) came jogging back my way to run me in, I was in a bit of a dark place, but she helped me push through to the finish. And while I didn’t come close to a PR this time, my final time (2:18:34) was actually the second fastest finish I’ve achieved in the half marathon distance. Who knows what would’ve happened with proper training!

Easy to see where I was having a good time and where I was … not. Kudos to Destination Races for making race photos free! Because these are HILARIOUS.

It took me 20 minutes or so (and a lot of coconut water and fruit) to start feeling human again, but that’s when the real fun began — the wine festival! Right by the finish line, tons of booths were set up housing people from wineries all around the area — all of them pouring samples from two or three types of wine, many of which highlighted the grape the area is best known for, the pinot grape. 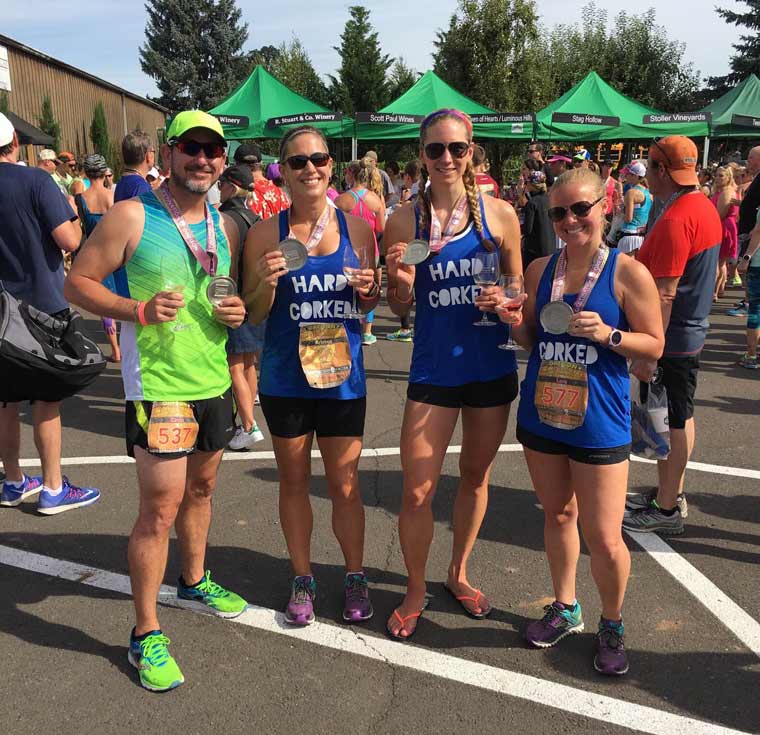 It requires considerable dedication and a bit of standing in line to fully take advantage of a festival like this, but I’m happy to report that my friends and I were totally up to the task. We stayed until almost noon, chatting with many of the owners and proprietors of the different wineries. It’s fascinating to learn how they got started — while some were old family businesses, quite a few people had stories to share about how they came to the area, fell in love and started making wine. 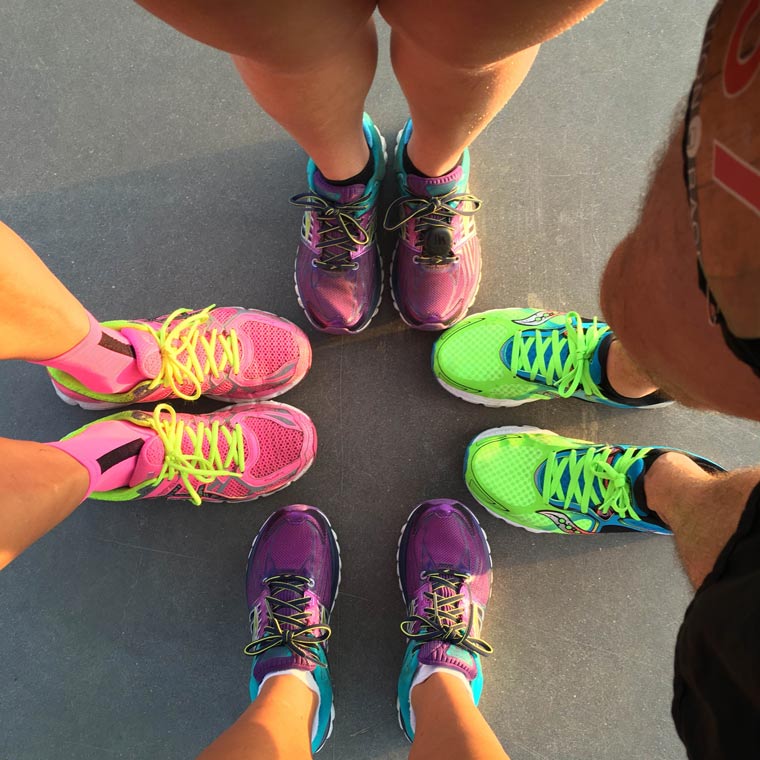 We grabbed lunch (and maybe another glass of rosé) at a nearby restaurant there in downtown Carlton — we’d heard good things about The Horse Radish and those things were not wrong, that’s for sure. After an epic nap, we went for another delicious meal at Zippy’s Pizza, which was near the house we’d rented — we spent a long time talking with the owner, and she made some very excellent wine suggestions. Why don’t I live in a place where even the pizza joints have a killer wine list?

The next day, we took advantage of the fact that Stoller Family Estate was on the way back to Portland, so we stopped off for a proper tasting — couldn’t very well do that before the race the morning before. Megan had a late afternoon flight, but before we dropped her off, we had one more adventure — hiking Horsetail Falls! Short hike, but fantastic views. Plus, it’s always awesome to have an opportunity to swim beneath a waterfall, no matter how chilly the water is, right? 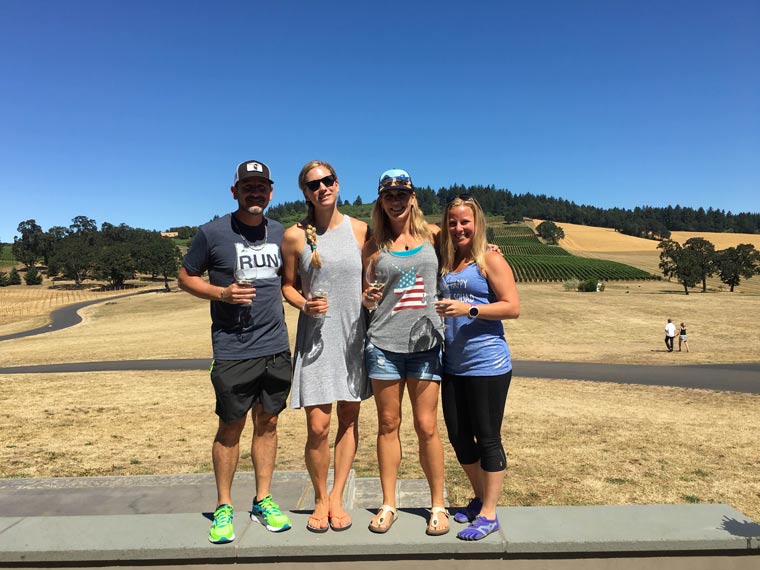 You don’t want to know what was involved in my climbing up onto that ledge.

And if you’re wondering how hiking on post-half marathon legs felt? Well, yeah, it was a little tough — I had a few areas that were hella tight, but I think hiking was probably one of the most helpful things I could’ve done. 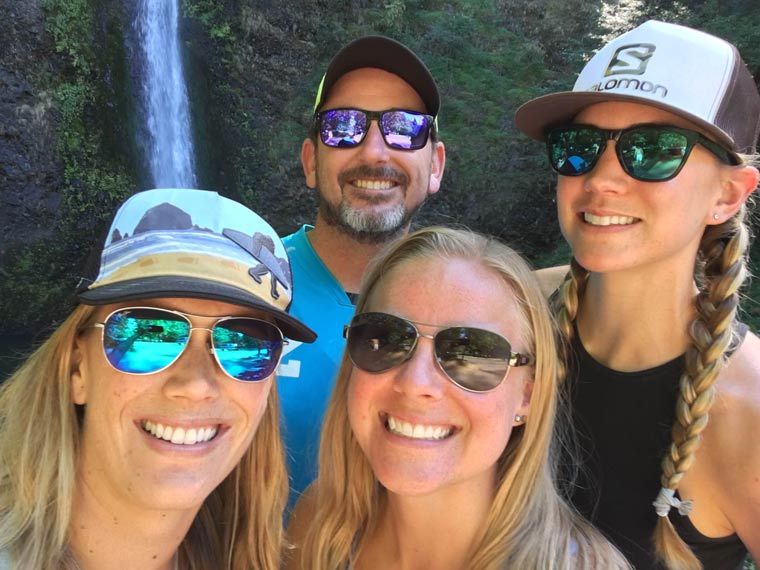 Lora, Kevin and I all booked flights later in the day on Monday, so that morning we headed downtown with plans to hit Voodoo Doughnuts (they loved it, but I … well, I’m not a huge doughnut person, so hey! It was a fun experience that now I never have to repeat, right?) and a couple of breweries: Base Camp, which had a super cool s’mores stout I’d recommend, and Cascade Brewing Barrel House, which had about a million things I’d recommend — they specialize in sours and offer tiny tasters and, man. I could’ve stayed there forever and ever. 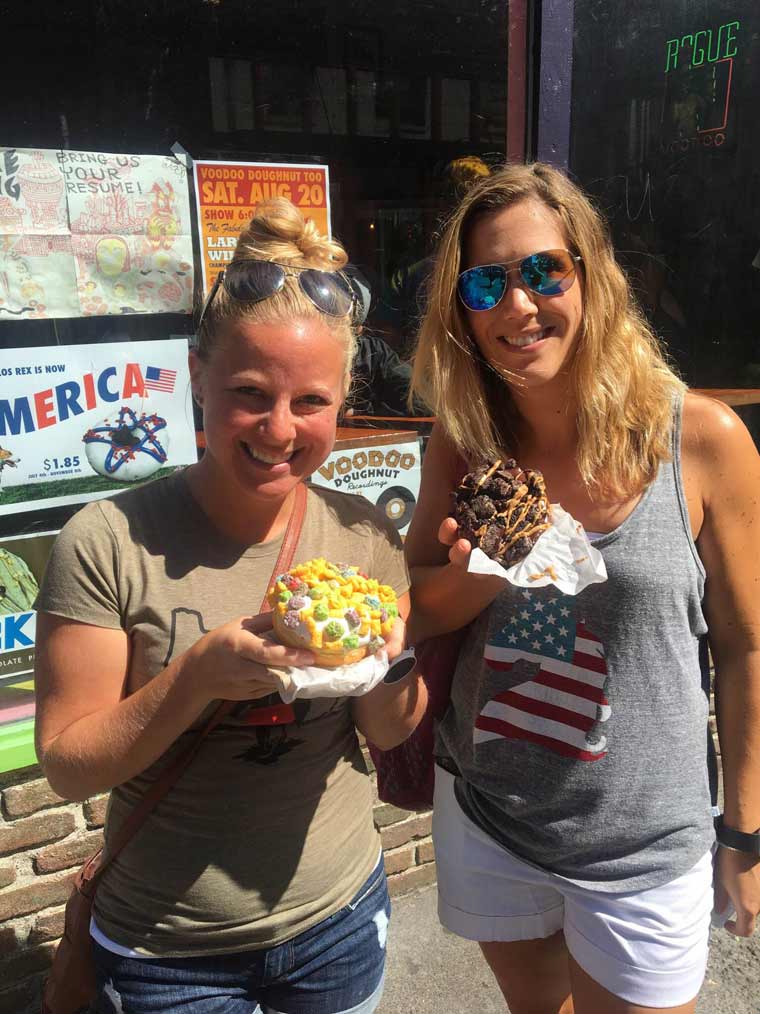 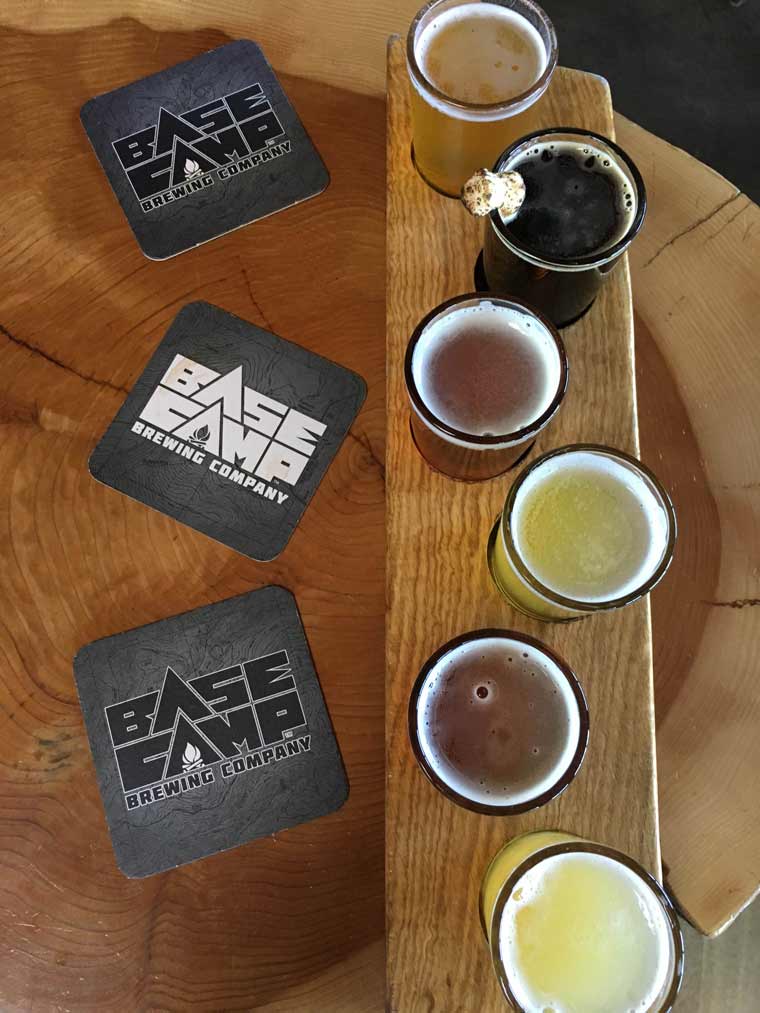 Except for the fact that I had a yoga date with my girl Jamie over at Flex & Flow Yoga, and no way was I going to miss that (or show up tipsy), so I exercised serious restraint with just a few tasters at Cascade and headed over for a killer yoga workout that left me totally drenched with sweat and super blissed out. And that’s close to what you want to be before you catch a red eye home, right?

I flexed, I flowed, now I’m catching my flight. Thanks @winecountryhalf for the race entry and @flexandflow for tonight’s class — it’s been rad!

Are you big on turning a destination race into a mini vacation? If so, what’s your favorite one you’ve done, or what do you have on your calendar? Clearly I’m very into packing as much into a trip like this as possible. Do all the things! —Kristen