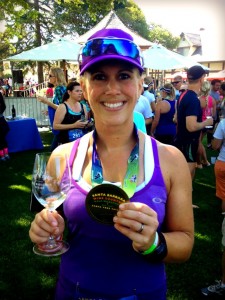 Wine tasting at the finish line makes a PR even sweeter.

There are plenty of things I’ve tried once or twice and never gone back to. Pickles, for one. Gross. But some things—like a really full-bodied Cabernet—are an acquired taste that I’ve developed. In the weeks leading up to the Santa Barbara Half Marathon, I wasn’t sure which of these the 13.1 mile distance was. I’d tried it twice with vastly different but completely horrible experiences.

Turns out, the half marathon distance is exactly like red wine. (And not only because that was the predominant beverage on hand at the finish line, either.)

I was a little nervous at the start, although unlike my last race, I remembered to use my asthma inhaler. My race plan pretty much consisted of “don’t die” and “walk if you need to.” I made a point to start out at my own pace—the rest of my amazingly fun team (go Team Wine-O!) was fast, and I knew that if I tried to stay with any of them for even the first mile, I would pay for it later. I still went out a bit faster than planned at close to a 10-minute pace for the first couple of miles, but I stayed loose and relaxed and found myself truly enjoying the atmosphere.

The first couple of miles had featured some hills—nothing big and scary—and then I settled into a comfortable pace for the next few miles. The sun was bright but not in my eyes, the temperature was totally pleasant, and I found myself holding a 10:30 pace without much effort.

And then I hit the hill around Mile 7, and things slowed waaay down. Glaciers have moved faster.

I’d managed to hold at least a jogging posture on the previous hills, even if my pace slowed, but this monster was different. I stuck to my guns for a couple of minutes, but when I realized that I still couldn’t see the top, I decided to save my effort and run :45, walk :45 until I reached the top. It was totally worth the climb—not only was there a glorious, glorious aid station there, but the views were absolutely spectacular.

Besides, what goes up must come down, right? And come down I did, at a surprisingly speedy pace for the next couple of miles.

At one point, I passed a buffalo careening through his pasture toward the runners, and later, two alpacas wearing the world’s most adorable bells around their necks and were checking us out as we passed. I had a smile on my face and a spring in my step, and as I came upon Mile 12, I realized, holy crap, I’m almost done. And I don’t even want to die a little bit.

Of course, the moment that thought entered my mind, the hills started up again. A sweet volunteer told me as I struggled uphill, “Don’t worry, this is the last one!” So I pushed my way through and got ready to enjoy a nice downhill and speedy finish. At least, that was until I saw the next hill. 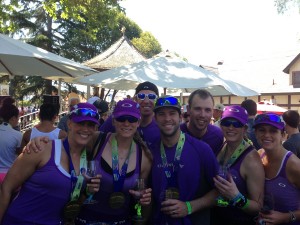 How could I NOT have fun with a team like this?

Now, keep in mind that, although I didn’t go into this race with any real time goals (and certainly no intention of a PR), by this point in the race, I was looking at my watch and calculating my probable finish time. And while I might not have had a time goal, I sure as hell knew what my previous PR was (2:27) and when I saw that was within reach, I wanted to beat it. Badly. In fact, when I saw my position and time at Mile 12, I thought I’d be able to come in sub 2:20, and I could barely believe it. Well, that’s what I get for getting cocky, right?

Anyway, there were a couple more hills, and the strength and elation I’d felt at Mile 12 had faded. But I still stayed out of that dark place I’d found myself in twice before. I didn’t want to cross the finish line so it would just for the love of God be OVER already. I wanted to cross the finish line so I would have a new goal to work toward in my next half marathon.

Yep. As I was pushing toward the finishers’ chute, I was already planning another 13.1 race. Whether it’s on its own or—get ready for this—part of a half Ironman distance, I’m definitely not done with the half marathon. In fact, I think I might be a little bit smitten with this distance.

Especially when it comes with a wine-tasting festival at the finish line.

I want to thank all of you who commented or tweeted encouragement after my pre-race post. It meant the world to me, and I hope that my experience will inspire some of you who’ve had similarly awful experiences with a race distance to give it another shot.

Tell me—have you ever changed your mind this drastically about a race distance (or a fitness class, or a sport, or…you know, anything)? I want to hear about it! Surely I’m not the first! —Kristen