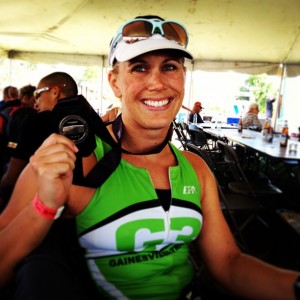 The Leadman Tri Marquee in Tempe, Ariz., on April 14 was billed as epic, and you know what? It wasn’t just epic. It was life changing.

This was my first foray into a true endurance distance race—prior to this, I’d done Olympic length triathlons, and I’d done half marathons, but I’d never done something that I knew would take me the better part of a workday. But, when fellow FBG Susan, who’s based in Phoenix, told me about the Leadman, I realized this was my opportunity to step it up.

The 125 km race played to my strengths—the swim was long (2500m), the bike was long (109.5k), but without any major climbs, and the run was relatively short (13k). Those were all distances I was sure I could do, so it was just a matter of training hard and putting it all together on race day.

Despite plenty of preparation, loads of encouraging calls, texts, Tweets and more, I was beyond nervous the morning of the race. Like, fighting back tears level of nervousness. And when my group was just moments away from entering the water, the nerves hit even harder because I realized … I had forgotten to use my asthma inhaler. And I had not left it in transition. Basically, I was about to embark on the hardest endurance event of my entire life without the one thing I’d done religiously before every single workout leading up to it. I didn’t puke, but it was a close call.

Fortunately, my plan had been to stay aerobic throughout the race anyway, and I generally only run into trouble with my asthma when I jack my heart rate way up, so I figured I’d be okay. And if not? Well, there’s always medical support at these things, right?

I placed myself behind the first line of swimmers with the plan to stay just behind the front of the pack and see how I felt with 500m or so to go, at which point I could decide if I wanted to make a move or stay where I was. That plan didn’t exactly work out—these swimmers were fast, and before long, I was swimming (blindly and directly into the sun) all by myself. I was way behind the top swimmers and far enough ahead of the rest of the pack that I didn’t see anyone nearby for a while.

I got a bit off course here and there until we turned away from the sun and I could see again. I’d had a little breathing trouble on the first half of the course and felt like my wetsuit was too tight around my neck, which was really due to nerves, I think, but once I made the turn I settled in and reminded myself that this was just the beginning, and this was the part I was supposed to like. If I let myself feel miserable at that point, I was going to run into trouble later.

Wetsuit off and Gu safely packed in the back of my kit, I jogged over to my bike and, very methodically, went through my mental checklist. I grabbed my sunglasses, my socks and shoes, bike gloves, and, of course, my bike, and started heading for the exit. And that’s when I realized I’d forgotten my helmet, which, well, you sort of have to have in these situations. I hightailed it back to my transition area, grabbed the errant helmet and hopped on my bike. And stayed on it (more or less) for the next 4-plus hours.

This was a tricky course, not because any of the hills were particularly challenging, but because there were loads of super sharp turns, and, considering the Leadman athletes did the same loop four times, there were a fair number of wipeouts (none including yours truly, though!). I had simple goals—don’t get sloppy, don’t get lazy and follow the nutrition plan. 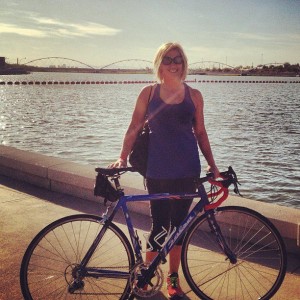 I was all smiles the day before the race when checking my bike.

I nailed it. My speed wasn’t anything spectacular—15.8 mph average, which was much slower than some athletes, but I was able to do the bottle exchange on both my left and right side (although I might’ve said, “Oh sh*t oh sh*t oh sh*t oh sh*t,” as I pedaled up to each one) and, when I dropped my chain on a sharp turn during the final loop, I got off my bike and put it back on without incident. A year ago, the thought of doing any of those things would’ve sent me into a panic, so by the time I rolled into T2, I was feeling pretty good. In fact, at various points during the ride, I found myself with a huge smile on my face, thinking, “Dude, this is awesome.”

At this point, it’s safe to say my brain was not working at maximum capacity. I’d spent the last mile or so of the ride running through what I needed to do in transition so that I wouldn’t make another bonehead move like I had with the helmet in T1. I racked my bike, took off my helmet, grabbed my race belt and bib, and took off.

And then I realized I still had my bike shoes on, which aren’t even made for walking, let alone running. I popped back over to my transition area (again), switched shoes, and headed out for the final—and arguably most challenging—portion of the race.

Anyone who knows me will attest to the fact that the run isn’t my strongest discipline, and although I’d done plenty of short brick runs off long training rides, it was impossible to predict how I’d really feel on this run. I started off conservatively—my coach had made it clear that he’d prefer I have a little more left at the finish than expected rather than come through the chute at a shuffle.

There were a couple of aid stations early on, and I was pleased with my pace—right around 10:20 or 10:30 for the most part. And then, we hit the technical part of the run, and that all changed. Big time. 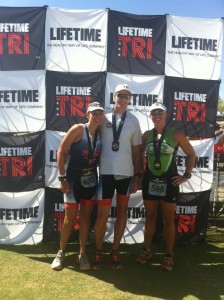 Susan, IHB and me at the finish. It was freaking awesome.

See, here’s where the “epic” part of this race came into play. The run included a few miles of trail runs, and I figured, hey, no problem. I love running trails. Except, the trail had ridiculously steep hills with totally uneven footing and loose rock and, well. I took one look and said, “Oh, for Pete’s* sake,” and walked it, both to conserve energy and avoid injury. I did the same going down. And I repeated all three of those things each time I encountered a hill like that.

(* I didn’t actually say “Pete’s.” Substitute a different four-letter word here, and know that I probably said it 16 times over the course of about three miles.)

This is the part of the story where I decide I’m never, ever doing this again. If I could turn around and quit without having to go back over those hills again (and also if nobody would know), I would do it.

This is also the part of the story where I run into Susan, who’d passed me on the bike, at an aid station. She encouraged me, gave me the lowdown on the next mile or two (much flatter, thank God), smacked me on the butt and sent me on my way. I filled my bra up with ice (and my shorts, and the back of my jersey) and shuffled off with a smile on my face and a new state of mind.

The rest of the run wasn’t easy—far from it. There were a few times when it seemed like we’d gone a long time without an aid station, at which point the ice I’d shoved down my sports bra ceased being merely a cooling mechanism and became the most delicious thing I’d ever put in my mouth.

Hey. Hey you. Don’t judge. You do this race and see if bra ice doesn’t sound freaking amazing, then talk to me about it.

At this point, my pace had dropped to slower than 12 minutes, but the shocking thing was that only a couple of people had passed me, and I’d actually passed quite a few runners. I realized I felt better at Mile 4 and 5 than I did at the beginning of the run, and that’s when I knew I had a strong finish in me.

I kept a steady pace over the bridge, chatting with people running close to my pace (Hi, Paul and Chris, if you’re reading!) and could hear the crowd at the finish line. With maybe 100 meters to go, I passed a man who was clearly struggling a bit, but, then again, most of us were to some extent. A moment after passing him, I heard him gasp in pain and yell, “Help me!” I turned back and sprinted to him, grabbing his arm to keep him upright. He looked at me, and said, “No! Not you! Someone who already finished!” 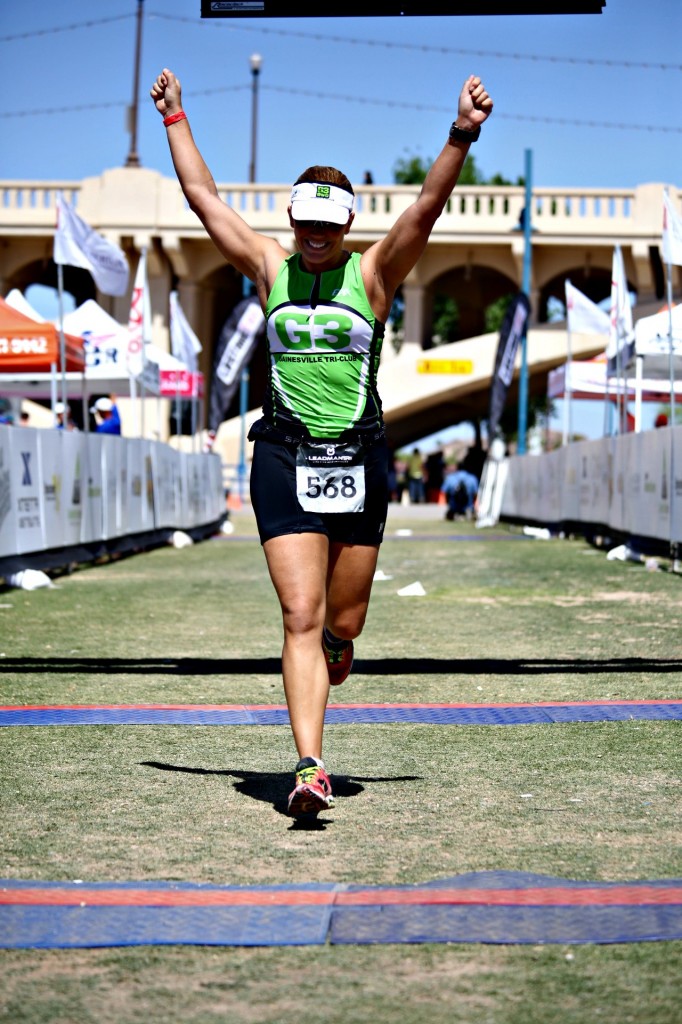 And that should tell you everything you need to know about the amazing people who do races like this. The man was about to fall to the concrete, and he still didn’t want to hold anyone back. A couple of spectators ran over to help, grabbing his arms and yelling to me, “Go! Go! Finish strong!”

I did. I finished with an enormous smile and not a single regret, and I crossed the line 6 hours, 59 minutes and 19 seconds after I’d begun. Susan and her boyfriend were there to cheer me on, along with another friend of mine who lives in the area. My shoes were squishy with water, sweat or blood—I wasn’t sure which—and my vision was blurry from all the sweat and sunscreen in my eyes. But I’ve never felt better in my life.

I have so much to say about what this event meant to me, but since this is already about a million words long, I’ll save it for another post. But in the meantime, I would love to hear from you all.

Have you ever done an endurance event that you weren’t sure you’d be able to complete? Did it change the way you felt about running, or triathlon, or even yourself? —Kristen