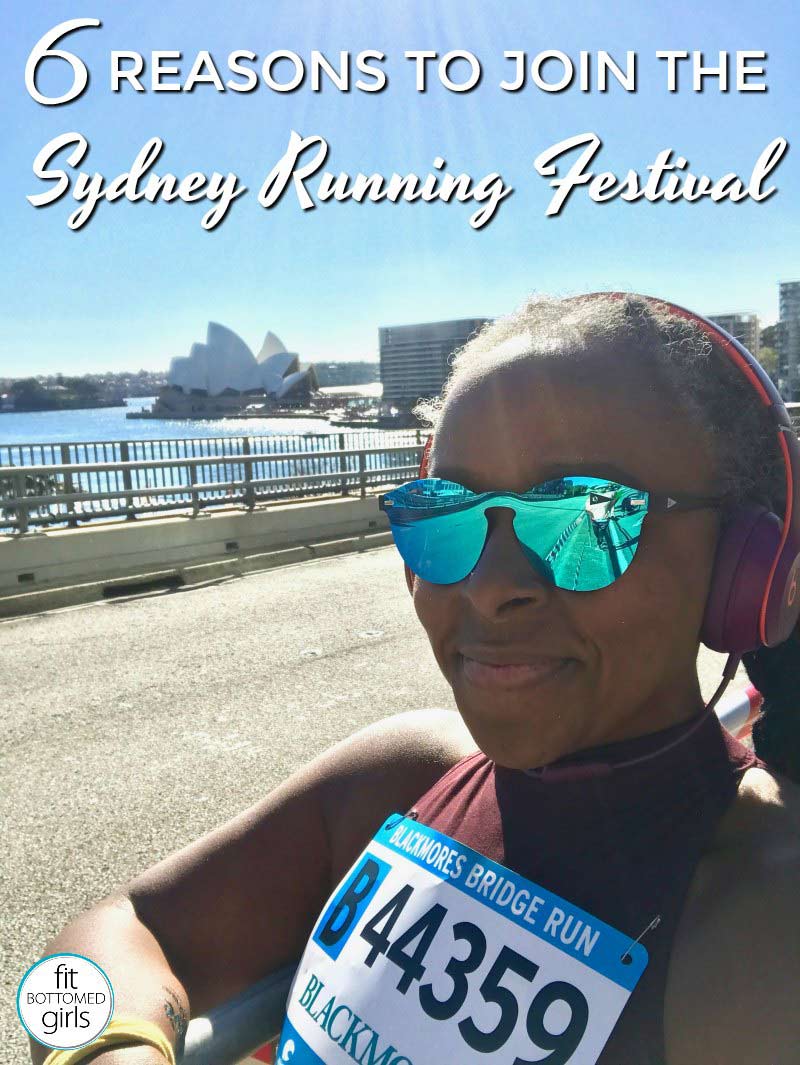 G’day, FBG crew! Earlier this fall I was invited to lace up my kicks and head Down Under to join 37,000 other runners at Blackmores’ Sydney Running Festival, a one-day, four-race event in the Aussie city — you might’ve caught a little bit of the excitement when I took over the FBG Instastory on race day. It wasn’t the first time racing away from my home turf in Miami (I’ve run in the Bahamas, Antigua, Vancouver and with FBG Kristen in Jamaica’s Kingston City Run). But it was the first time I’ve run in the Southern Hemisphere (and, no, races there don’t go counter-clockwise!).

Now that I’m back, I want to share my impressions, tips and recommendations with any of you who might be considering an Aussie athletic adventure of your own. After all, there are only 321 days until the 2019 festival, and you’ll want plenty of time to plan (and, let’s face it, save!). So, here’s what you need to know! 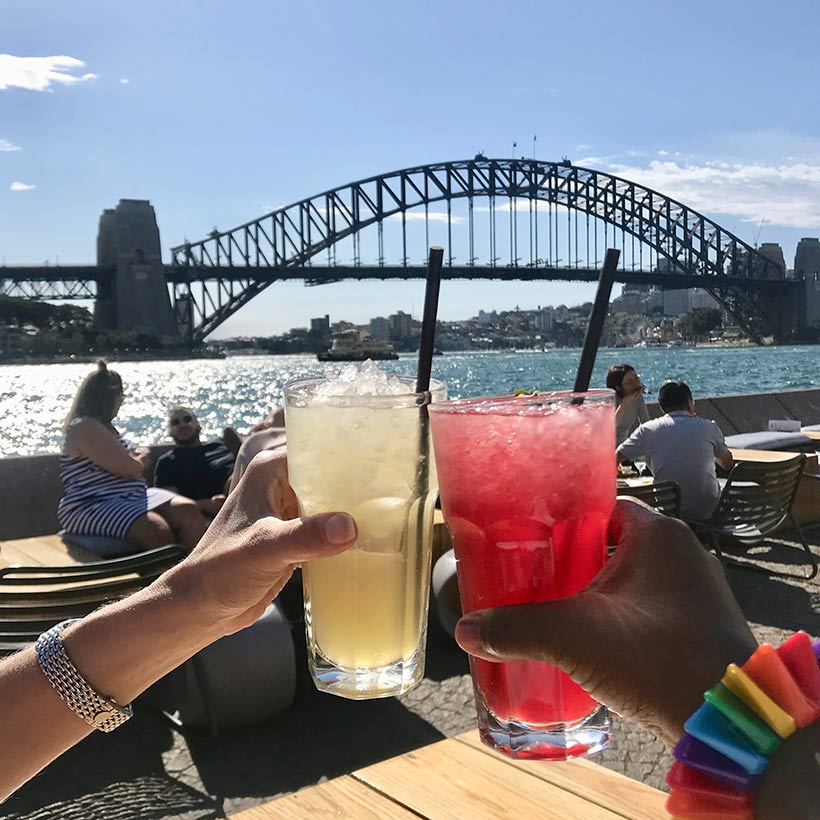 From strolling through the green spaces of the Royal Botanic Garden to climbing the 440-foot-high Harbour Bridge to swimming in an oceanfront pool on Bondi Beach, there’s so much to do in Sydney. Australia’s multi-cultural south-coast city is known for its diverse cuisine and world-class museums, and also offers “shopportunities” galore for black-belt shoppers like me! My advice: Come for the race; stay for the place. 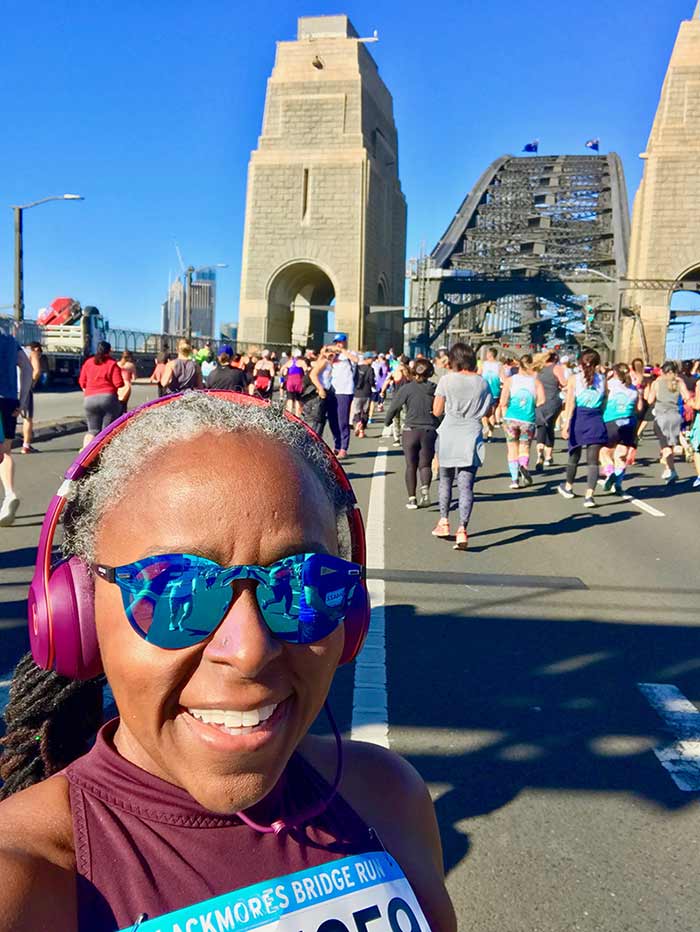 All four races — the marathon, half, 10K and the family 3.5k — start in Bradfield Park at the foot of Sydney Harbour Bridge and take you to its main deck (which is closed to traffic, of course). And with the exception of the 3.5k, they end with a flourish and a downhill sprint from the Botanic Garden at Sydney Opera House, where those iconic sails look like massive arms welcoming you to the finish line. Marathoners (who have a six-hour cutoff) log their 42.1km on a hilly course along the waterfront, through several city districts and Centennial Park. “Half-crazy” runners run around Circular Quay and over to Pyrmont.

But I think 10K-ers like me get the most bang for their running buck, enjoying views of all Sydney’s most popular sights – the bridge, harbor, the Opera House and the Botanic Gardens ­ – in the 60-to-90 minutes it takes most competitors to finish. Coming from pancake-flat South Florida, I was anxious at the start about Sydney’s hills. But they don’t come until the last two miles of the race, which allowed me to pick up some speed early on (but are a real pain when you’re tiring at mile five!). There were lots of foreigners (I saw huge contingents from Japan) and first-timers on the 10k course, and good crowd support once you got off the bridge and into the city itself.

A few more things to know: On race day, your race bib gets you a free train ride from the CBD (the central business district or downtown area) over Harbour Bridge to the start (you’ll get off at Milsons Point station). You’ll definitely need disposable layers as you wait under the bridge (the wind coming off the water is brutal)! And there are no water stops on the course until around mile 2.75, so if you’re a thirsty runner, definitely BYO hydration.

First, the bad news: At this time of year, you can never be sure what kind of weather you’ll have on race day. As Sydney transitions from winter to spring (September to November here), it can be a brisk 45 degrees one day and a balmy 82 degrees Fahrenheit the next, with significant variances in temps from morning to evening.

The good news: Whether you perform best in cool or warm, it’ll probably be your preferred temp at some point during the race! When I arrived in Sydney the day before the race it was in the low 80s. Race day morning was a chilly but sunny 47 degrees, and by the time I’d finished it was a cloudless 77. Like I said, whatever weather you’re hoping for on race day you’ll probably get – if only for a moment! 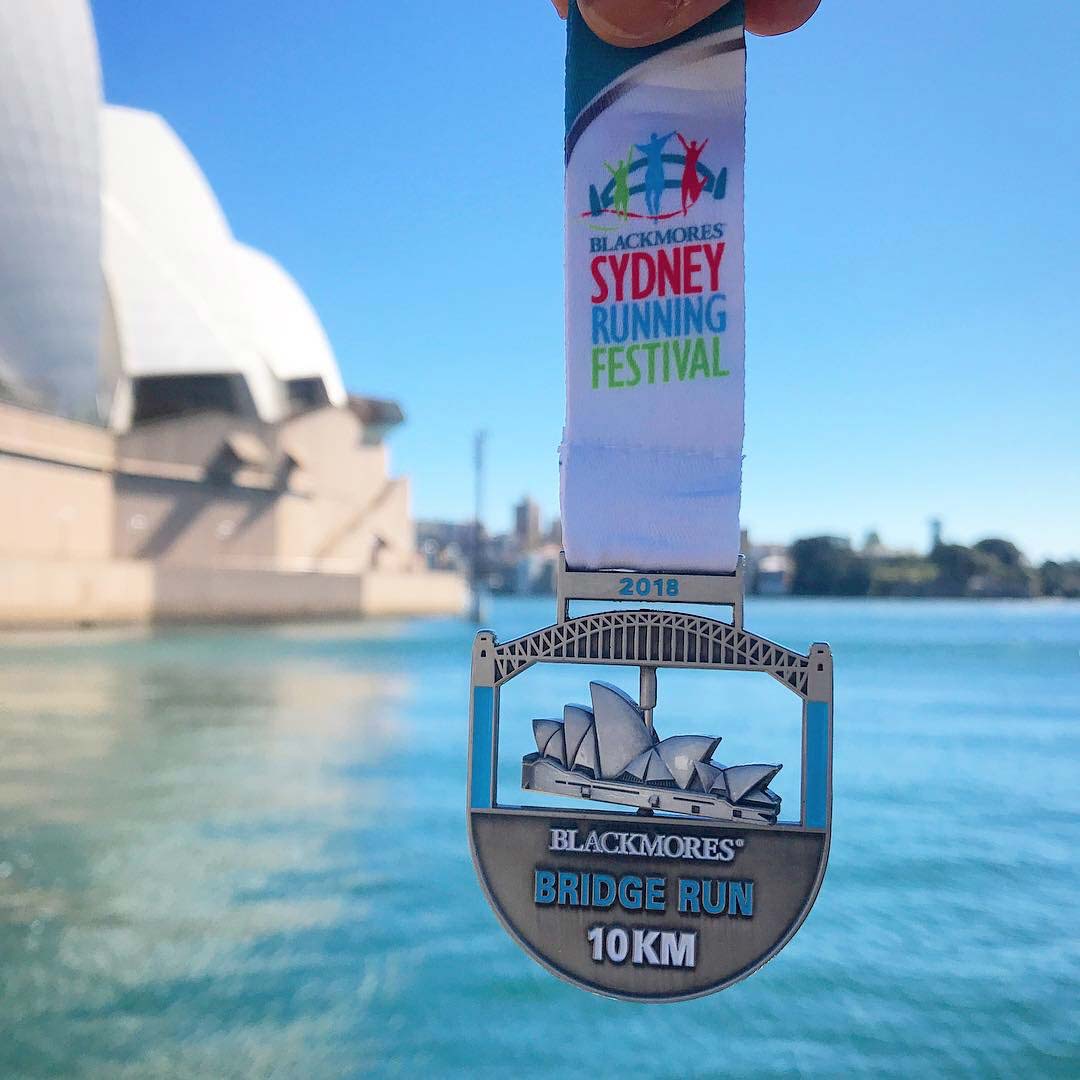 It’s not every day that your race reward comes in the form of a silver medal with a spinning replica of the Sydney Opera house in the middle. But if you do the Bridge Run 10K, that’s your shiny takeaway. In fact that’s the takeaway for all four races; the only difference is their size (the marathon memento being the largest). Once you’ve finished, get bonus points by snapping a pic of it suspended in the air with the real Opera House as a backdrop behind. 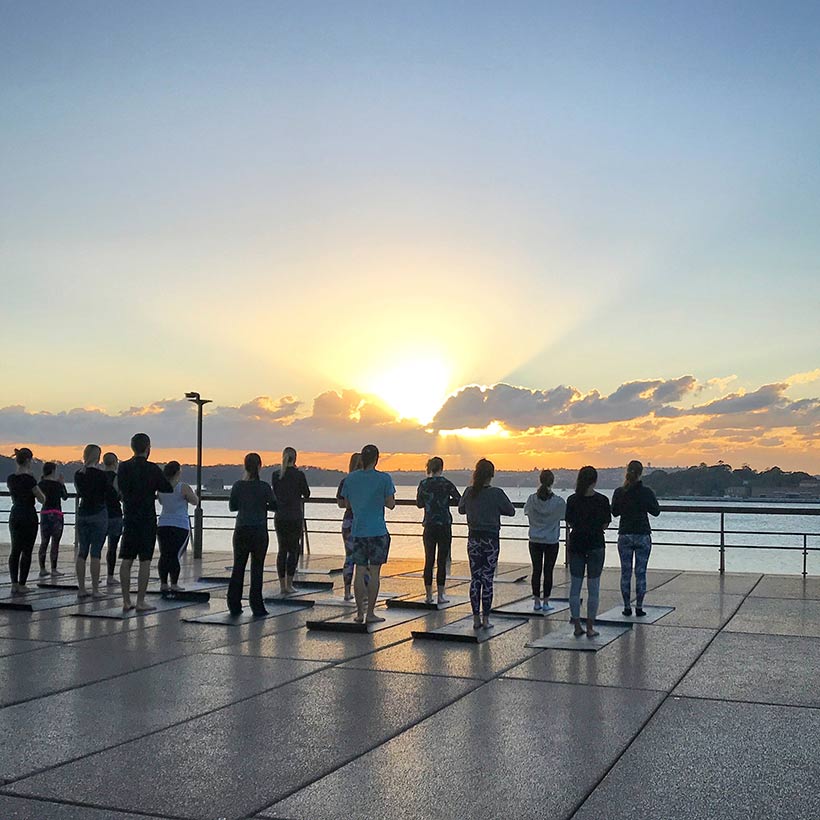 If you still have energy to spare post-race (or want to work out the kinks after the trans-Pacific flight), Sydney has several options for getting your exercise on. The local outpost of Barry’s Bootcamp opened the weekend I was there, but given sunny skies and no Miami-like humidity I enjoyed my workouts en plein air.

The first of my favorites was a #SunriseontheSteps yoga session at Sydney Opera House. Barefoot Yoga’s Phoebe Jones teaches a breath-focused, hour-long vinyasa flow for all levels here three times a week. Enjoy the sunrise plus views of the harbor and Harbour Bridge from the plaza as you salute the sun with as many as 60 other yogis. The Opera House provides mats but be sure to wear layers and bring socks because mornings can be chilly (it was 45 degrees during my class). Classes cost AU$25 (about 12 bucks) and fill up quickly, so book in advance online here.

Whether you consider yourself a walker or not, you simply MUST do the Bondi-to-Bronte walk. If you stop to take photos (which, trust me, you’ll want to at every turn), it’ll takes about 90 minutes to complete the breathtaking ramble from Australia’s most famous beach along the undulating coastal path to the town of Bronte, about two miles south. And it’s worth every moment of your time, so don’t rush through it. You’ll pass runners, parents with strollers and dawdling tourists along the way, but you’ll only have eyes for the landscape, bordered by sea that’s a turquoise I’ve only seen before in the Caribbean and majestic sandstone cliffs. 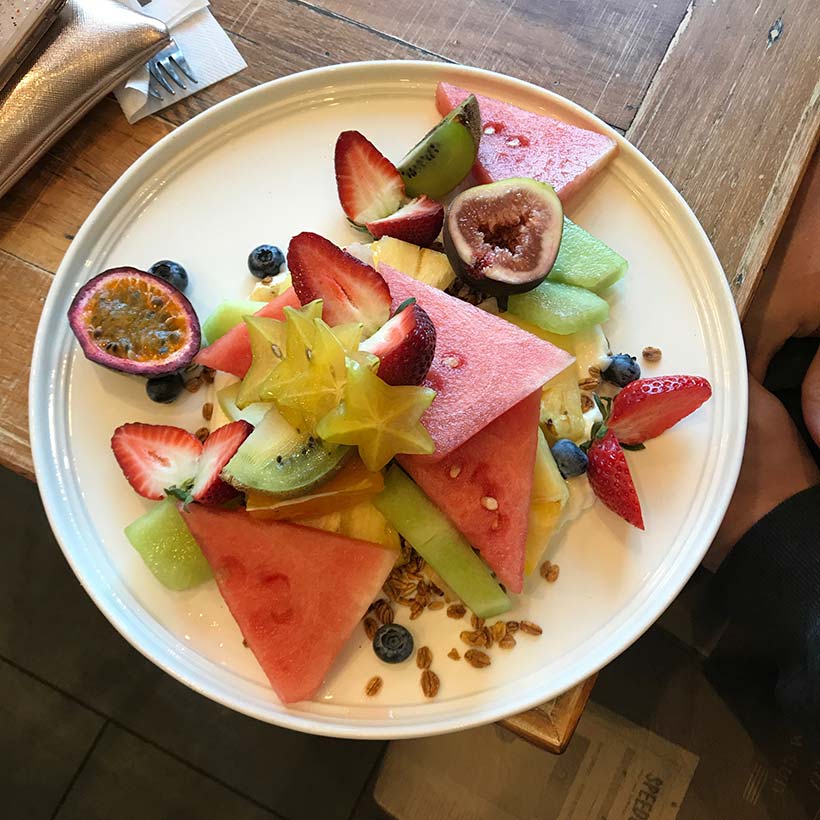 In just about every other race I’ve run, you’re handed food as you pass through the post-finish line chute or there’s a complimentary runners’ food station. But they do things differently in Sydney. You either pay for your own meal in advance when you register and pick up your meal on the day, or you bring your cash (and your patience) and come prepared to line up at various food stalls (which, marathoners should note, are all up a steep incline at the finishers’ village in the Botanic Garden). Since I’d only done the 10k, the lack of free food and snacks wasn’t a major issue for me, but if you’re running a longer distance, be aware.

Fortunately, the city itself has plenty of post-run food options, including Speedo’s Café on Bondi Beach (about a 10-minute drive out of the city center). Their Big Breakie — a heaping platter of eggs, sausage, bacon, hash browns, grilled tomato and toast — is guaranteed to put back in what the race took out. But there are also plenty of lighter options on the “Clean” section of the menu, including coconut chia pots and the most Instagrammable fruit salad ever. Pair either with a steaming “flat white” (a latte-like Aussie–style espresso with foam) and you’re good to go.

I indulged post-10k at Seventeen, a waterfront restaurant at Walsh Bay, with homemade apple pie and banana ice cream accompanied by a rum cocktail. #noregrets. The biggest culinary surprise of my trip (beyond Vegemite and beetroot relish) came on my final night, when I dined at Alibi at the Ovolo Woollomooloo hotel. Head chef Michael Nicolau’s plant-based creations (think peppercorn-crusted macadamia cheese; crusted cauliflower in porcini broth, and steamed buns stuffed with mushroom, cashew and cabbage) thrill vegans, but even card-carrying carnivores like me will leave satisfied and stuffed.

What Else to Know Before You Go 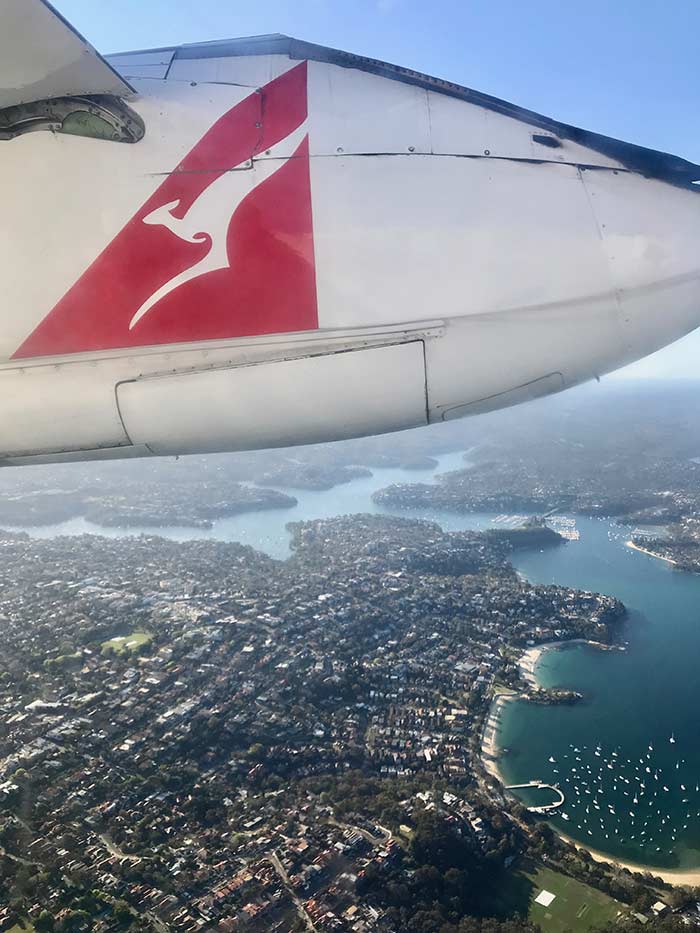 Sydney is a huge city, and there are, of course, many options available for transportation and accommodations. But if you’re looking for a good place to start, allow me to share my experience.

How to Get There: I visited Sydney as a guest of Destination NSW, the government body that promotes tourism to the state of New South Wales (of which Sydney is the capital). After a six-hour flight from Miami, I flew Australia’s national carrier, Qantas, from San Francisco, a 15-hour odyssey made bearable by the superb staff; a comprehensive inflight entertainment system; and copious amounts of Tim Tams, the much-loved Aussie biscuits offered as inflight snacks. Qantas flies to Sydney daily from New York (JFK), Dallas/Fort Worth and Los Angeles; six times a week from San Francisco; and five times a week from Honolulu.

Where to Stay: In The Rocks, The Langham, Sydney (which hosted me) is posh and on the pricey end (rates start at around $275 per person, per night), but it’s not at all pretentious and it’s only 10 minutes’ walk from Sydney Harbour. In the Surry Hills ‘hood, the charming Little Albion Guest House (which also hosted me) opened in summer 2018 in a converted convent, offering 35 compact and cool rooms, a roof garden, complimentary Continental breakfast, and rates starting at $150 per person per night. You can search for hotels by type and location on Destination NSW’s site, sydney.com.

How to Register for the Race: The 2019 Sydney Running Festival will take place on Sunday, September 15. Get more info and register at sydneyrunningfestival.com.au.

What’s the farthest you’ve traveled for a race? Were there any major differences that you noticed, aside from climate and scenery? —Sarah