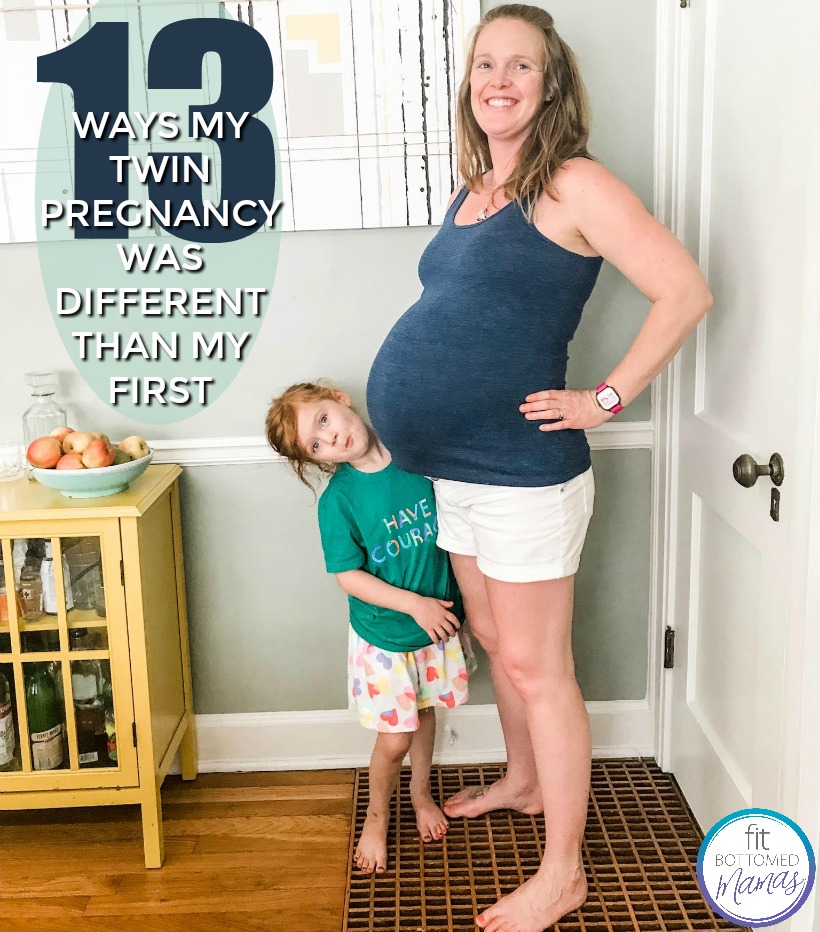 They say no pregnancy is the same. And I can tell you from personal experience that this is true. And it’s extra true when you’re comparing your first singleton pregnancy with a second one with twins. Here are all of the ways one was NOT like the other.

13 Ways My Twin Pregnancy Was Way Different Than My First

1. More symptoms. Not only did I feel like I had every pregnancy symptom and side effect known to woman with twins, but I also felt like they were more intense. Sure, with my daughter I had nausea that wasn’t fun, cravings, a little heart burn, and some swelling and uncomfortableness in the third tri, but that’s nothing compared to what I had with twins. Here are a few examples: not being able to pee, nausea, heartburn, exhaustion, bleeding gums, cravings, side pains and soreness from my belly expanding so quickly, a runny nose every morning, shortness of breath, upper back pain, lower back pain, pregnancy brain, and swelling in my hands and ankles.

2. Little to no sex drive. With my single, I was pretty lucky that sex was good and I was interested. This time though? Even on times that I was interested, usually it was just too exhausting to even try to figure out the positioning.

3. Intense belly growth. Double the baby; almost double the growth! At week 32 I measured 44 weeks. Just let that sink in …

4. A whole different level of planning and organizing. With my first, it was all about educating myself and getting the essentials. This time I’m less worried about how to keep them alive and am more concerned with logistics. Like, how do you take two babies and a four-year-old to the grocery store or doctor’s office? What do you really need two of? If one wakes up hungry in the middle of the night, should we wake up the other, too, so we can keep them on somewhat of the same schedule? All. the. questions.

5. The due date is … not really a due date. Yes, I had a 40-week due date, but since full-term for twins is more like 37 or 38 weeks, the “official” 40-week due date is pretty much null and void. Especially since many twin pregnancies come earlier than 37 weeks. Let me tell you: this REALLY throws people for a loop when they ask when you’re due. (And they always ask when you’re due.)

6. All the appointments. Some of this is because I’m of “advanced reproductive age,” but twin pregnancies come with a lot of appointments. I saw two different offices — an OBGYN and the hospital’s advanced fetal medicine department — and started weekly appointments at week 32. (And, that’s without me having identicals, gestational diabetes, or any other higher risk situations.)

7. Nothing fits. The last few weeks of my pregnancy I was down to three tank tops, two pair of shorts, and some sandals that fit. And, even then, those barely covered my bump because maternity clothes are built for women who go 40ish weeks and measure that way — NOT 44+ weeks (see no. 3). If you’re in this situation, I found ordering a size or two up from my usual size at Old Navy in their flowiest maternity clothes worked best.

9. More naps and more exhaustion, every week. I touched on this in no. 1, but it bears repeating because the lack of energy was so intense that naps weren’t a luxury — they were essential for basic functioning. And while the exhaustion was strongest in the first trimester, it only mildly let up in the second trimester, and came back pretty hard in the third trimester.

10. I had to ask for more help. I’m fairly stubborn about doing things myself — and not asking others to help. Well, with all the exhaustion plus also having a four-year-old, I really had no choice but to ask others for support. And, you know, it was really great to learn that not only is it okay to ask for help, but that it feels really good to let others help you when they want to, too. (Also, really good practice for life with two newborns!)

11. A LOT more comments on my body. When you’re pregnant, you’re going to get a lot of questions and comments from people you know and people you don’t know. I certainly had my fair share with my daughter. But with twins, I was like a magnet everywhere I went — from multiple people. Like a giant pregnant unicorn that everyone felt compelled to comment on. So much so that I wrote this post.

13. Seeing moms of multiples in a whole new light. It’s kind of like when I ran a marathon and thought to myself, “Wow, Ironman triathletes do this AFTER swimming and biking a ridiculous amount.” That’s how I felt about moms of triplets and more. Like, if they can do that, then I can do this. Mad respect!

Alright twin mamas: how was your twin pregnancy different? –Jenn