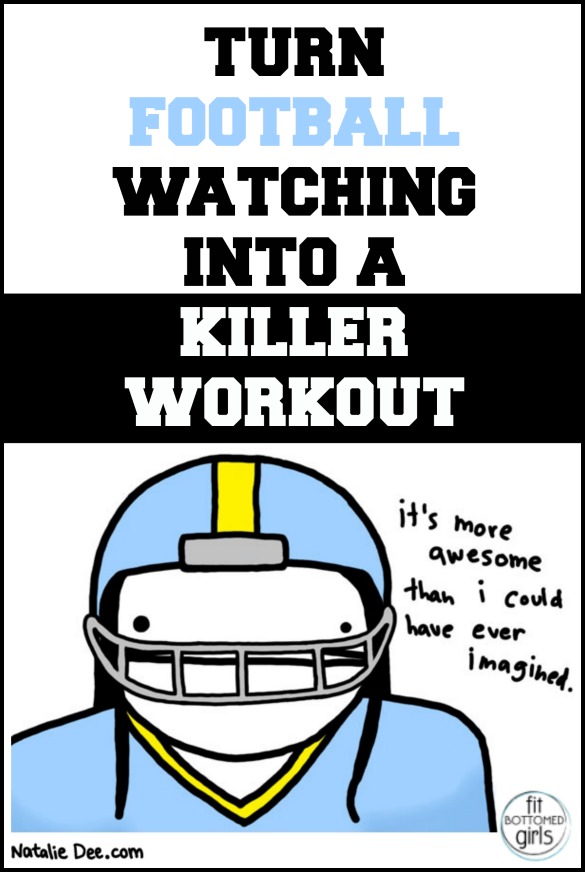 I just realized that this post title could be interpreted as really dirty, when really this post isn’t dirty at all. (Plenty of that here though.) Unless you’re talking about actual mud, and then it’s really dirty. See, this post is all about football workouts.

Usually, each Sunday my husband camps out in front of the TV, keeping me from my dear DVR and Oprah re-runs, and watches about 10 hours of football. Yes, I calculated it, and it’s actually at least 10 hours in a single sitting. Far too much in my opinion. So naturally, as a wife fulfilling a terrible stereotype, I have begun to nag him. Here’s a sampling:

6 p.m.: “Don’t you think you’ve watched enough football for one day?”
7 p.m.: “So, um, are you alive, or are you just some football zombie?”
8 p.m.: “If I hear one more ‘He could go all the way!’ I’m going to scream. Turn the M-effer off!!!”
See? It escalates. If you have a male loved one, I’m sure you can understand. Somehow though, my husband has found a way of deflecting all of the above comments and it’s not by tuning me out. He’s started exercising during the games.
Now how am I gonna hate on that?! He’s a smart one…
During each game, he’ll pick a team to root for (usually the one on his fantasy football team), and each time they score, he’ll do the number of push-ups equal to his team’s total score. So the first time they make a touchdown, he does seven push-ups.The next time they score he does 14, and so on and so forth. It’s actually kind of brilliant, and I wish I’d thought of it.

I mean, it turns recreational passive viewing into active participation. And after joining in this push-upgame with him last Sunday, believe me, you start to really get pissed when your team is winning 52-14. It adds a whole new dimension to the game.

Now, of course, I had to add my own spin to the game. In addition to the push-ups, I’ll do lunges when the other team scores, jumping jacks during commercials and then at half time, I bring out the dumbbells and do exercises for the biceps, triceps, shoulders and back, along with bicycle crunches for the core.

It’s one hell of a workout. I’ve turned lazy Sunday time into interactive Sunday time, and I’ve stopped nagging as much. At least for the one game. —Jenn

Want more From the FBGs? Read more about the benefits of couples working out together or how to work out while traveling.

Add a comment Cancel reply
21 Comments
Just for You
Drop the diet for good
A variety of anti-diet coaching programs just for you.
Get free access
STAY IN THE KNOW
When new stuff happens, you'll be the first to know!
About Us
Jenn and Kristen are passionate about letting women know they're more than a number on the scale.
Get the deets
Instagram
X