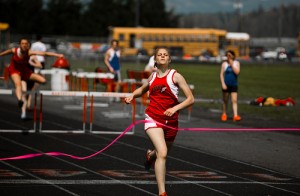 Now that I’ve completed marathon training (and ran the darn thing!), I have more free time on my hands. My Saturdays aren’t dedicated to running, and I can have a glass of wine on a Tuesday night without having to pray to the running gods that it doesn’t jack with my Wednesday morning run.

This new lifestyle has been both liberating and terrifying. While I love that I can really go after that New Year’s resolution to revisit my exercise A.D.D., I’d be lying if I said I don’t miss the BFD goal that I was working towards, the camaraderie with other first-time runners or the endless slices of pizza I could eat with hardly a second thought. What do I do now?

Going forward, I know that I want to run faster, and I know that I want to try some new activities and trends that are hot right now. But I also want to maintain my smokin’ post-marathon bod. Remember a few months ago when I told the scale to suck it? Well, I’m glad I did. After writing that empowering post, I stopped weighing myself, and by the end of training started to notice some major changes in my body.

I’ve worked out regularly since the age of 16, so I really didn’t think my body would change that much. But it did—especially in my legs, which went from strong to shapely powerhouses. My calves, which used to be massive (I’ve always been proud of their muscle girth), started to shrink and have more form, eventually causing my once-tight knee-high boots to sag down, even when I was wearing tights. (Excuse to buy new boots? I think so!) The side quad-thigh line became a permanent division on my legs, and my inner thighs started to get a line, too. Even though I work out for health, I freakin’ love those lines. And I earned them.

My cardiovascular system was off the chain, too. Walking up big hills felt like a picnic, and running for anything less than an hour seemed like a breeze. A breeze! Even my upper body became more defined and toned, especially my shoulders, which became pointier and more like a real runner.

After I got back from my truly magical trip and was fully recovered (read: could walk like a normal person) a few days later, I busted out the scale again. It was like revisiting a slightly abusive friend. I missed it, but I was afraid of what it was going to say. I shouldn’t have been as obviously concerned with it, but old habits die hard, I guess. And for some very un-Fit-Bottomed-Girl reason, I wanted that scale to show a number that reflected the changes that I could see in my body. (Don’t hang me on the fitness cross here, please!) When I stepped on the scale, it read my pre-marathon weight. A full 5 pounds less than my “suck it, scale” post, meaning that I was right back to “normal” for me, just with some serious muscle improvement. Victory—and those people were right about those carbs holding water!

I never intended to lose weight during the marathon, and I guess I never really expected the training to change me much physically, but it did! And, for the first time, I had an A+ health check-up. My doctor was elated that my usually high or borderline cholesterol (runs in the family, argh) was still high, but this time it was because my good cholesterol (the HDL) was off-the-charts high. Must be all of those peanut butter and banana sandwiches! 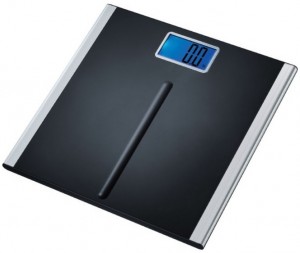 I enjoyed not weighing myself for the past few months so much that I’ve decided to only weigh myself once a week, just to keep on track. And because I have such negative connotations with the darn scale from my past, I decided to pitch it. (Plus, it was one of those wonky digital scales that’ll weigh you at two different weights if you move it to a different part of the bathroom—a bad situation for a former yo-yo dieter.)

Instead, with the generous help of EatSmart Products, I started a new friendship with the EatSmart Precision Premium Digital Bathroom Scale. It has no frills, besides a 3.5-inch LCD and step-on technology, and it’s all I could ask for in a scale. In fact, I like it so much, I named it Healthy Harold. Saying that you’re going to get on “Healthy Harold” is way better (and more hilarious) than saying “the scale.”

I feel like every step of my fitness journey teaches me something new. And marathon training only reinforced the reasons why Erin and I started FBG to begin with: That fitness and getting and staying fit is tied so closely to life. That fitness not only makes you feel good but it also builds confidence and helps you reach your goals, no matter what they are. I’ve gone from non-runner to runner, from obsessed emotional eater to intuitive eater. And my beliefs—that staying healthy and moving your body with activities that you love makes you a better and happier person—are only stronger now.

I can’t express how glad I am that so many of you readers are true Fit Bottomed Girls who embrace the idea that choosing a healthy lifestyle allows you to enjoy so much more of what life has to offer. I’m so humbled that you’ve been along for the ride thus far. Can’t wait to see what the next chapter holds! —Jenn