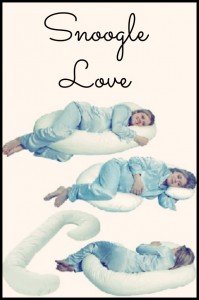 Once I hit the third trimester of my pregnancy, sleep became increasingly difficult. Not only was I getting up to go to the bathroom several times a night, but I was also battling terrible heartburn that would shoot me out of bed like a bolt of lightening. Even the simplest act, like rolling over, required waking up to heave myself into a more comfortable position. I used pillows—at one point I counted seven pillows for two people—to support my belly and help me get comfortable.

As luck would have it, at the height of my discomfort, I participated in an online Twitter chat that was giving away prizes. I just KNEW I would win (just like I knew my baby would come early). The first two prizes given were $25 Babies R Us gift cards. When the third prize was announced—a Snoogle—I was even more positive that I would win. Because I didn’t want a Snoogle. I wanted cash prizes!

Of course, I did win the Snoogle, which turned out to be about a $50 value. And even though I hadn’t wanted a Snoogle and wasn’t planning on buying one myself, it turned out to be the BEST thing ever for my sleep comfort.

The Snoogle (not to be confused with the sleeved-blanket Snuggie) is a massive curved body pillow. I cozied up to it immediately. Because of its multiple curves, it supports your head and neck, belly and legs/hips in one shot. The pillow is also really versatile. I’d start out with the pillow basically spooning me (the back to back position, according to the website). When I’d need to flip to my other side, instead of flipping the whole thing over, I’d just flip over and face into the pillow (tummy tuck position). It worked beautifully whichever way I did it. My belly got support, my hips were in good alignment, and I felt like I was being hugged. And most importantly, I got better sleep.

Now that the baby has arrived, I’ve retired the Snoogle from the bed (as well as a pillow or two). But I’ve taken it into the nursery and used it for breastfeeding. Similar to but much larger than the Boppy, it serves the same purpose and will support your arm and the baby. Its only drawback on the breastfeeding front is that it’s so big you can’t exactly haul it easily around the house.

The only other negative? The cover is kind of a pain to get back on when you wash it. It reminded me of threading a drawstring back through a pair of pants when it comes out in the wash. It would be awesome to have a zippered pillow case. At least, a zippered pillow case would encourage more frequent washing!

Have you tried the Snoogle? What products were must-haves for your pregnancy? —Erin