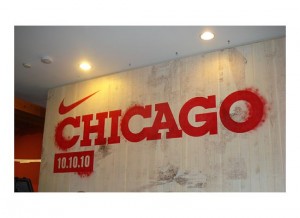 I love the Nike trips I’ve had the privilege of attending. Last month I traveled to Chicago for the company’s media briefing for its spring running collection. I like to run. I LOOOOVE running gear. I’ve always loved the technology, thought and love behind each Nike piece. This new line is no exception.

Not only did Nike spoil us with sneak peaks (look out for future posts closer to the launch of the new shoes and gear, but they also gave us full access to the press area of the 2010 Chicago Marathon. I got finish line seats the day of the race where I gladly went hoarse cheering people on. There’s absolutely no feeling quite like seeing someone about to collapse with fatigue only to pick up the pace and give it everything they’ve got because they hear you saying “You can do it!”

I saw the elite runners come in and qualify for future Olympic endeavors. I also saw running icon Joan Benoit Joan Benoit  breeze past me. THE Joan Benoit, who was the first female to win Olympic gold in the women’s marathon she pushed to get added to the roster was there. I teared up seeing her run past me. Seeing determination, strength and awesomeness in person does a body good. It’s that kind of inspiration that helps me run my best each run. I think about that type of athlete, the passion they have for their sport, the fight to keep going and power through. 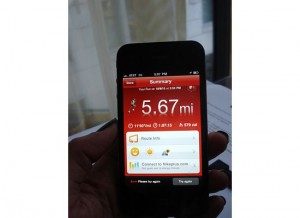 I think Nike did that on purpose. On day two of the trip they gave the media team shoes, borrowed iPhones and the new Nike + GPS App to try out. I ran along the Chicago riverfront jamming to the music and tracking my run. I’m not iPhone savvy by any means, but I was able to use the app pretty easily. If you haven’t already heard, Nike’s newest baby not only tracks your run with GPS, but it now also has the technology to track your miles when satellites can’t be reached, which makes treadmill runners like myself happy. It’s a runner’s dream. This toy takes away that lonely feeling, literally. You can sync up to your Facebook account and tell your peeps you’re running. If anyone comments on the post, you’ll hear cheering and encouragement as you go along. It offers multiple power songs for those hills and long stretches where you need extra umph for, too. At the end, celebrities and athlete rockstars like Lance Armstrong tell you congrats. Dude, it doesn’t get any cooler!

Basically Nike made me the happiest woman in the world. Filling a weekend with a marathon, inspiring runners, toys, and new innovative shoe and apparel gear is a sure way to make my heart explode with joy.—Tish