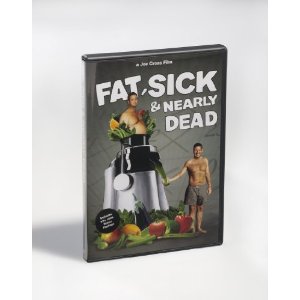 I absolutely love that there are more movies and documentaries on the market these days that talk about diet and fitness. First it was Super Size Me, whichbrought to light how bad fast-food is for our health. Then it was Food, Inc., which rocked my world (and changed my diet). And now the documentary Fat, Sick and Nearly Dead, which features juicing as a way to radically improve your health, is causing quite the stir.

The story begins with Joe Cross, who goes on a cross-country road trip while doing a fruits-and-veggies juice fast for 60 days (60 days!). On his way to improving his health and losing weight, he meets and inspires Phil Staples—a 420-pound truck driver from Iowa—who just happens to have the same rare autoimmune disorder that Cross does. While the movie starts by following Cross’ journey, it quickly morphs into Staples’ tale of overcoming depression and getting his life back. Along with incredible amounts of weight lost, both men are able to go off all medication by the end of the movie. And it’s all done through nutrition, along with some exercise. (Preach on!)

Let me be clear, I have never done a juice fast, and here on FBG our little ears perk up and our butts twitch when we hear the word “fast” or “drastic diet.” But, and this is a big but (and I cannot lie…oh wait, that’s butts…) these two men needed something drastic to get back on track. They were both unhappy, totally unhealthy and facing early deaths. So the fact that they did something severe to deal with their life-threatening issues, I can forgive and even applaud. Not to mention that both of them continued eating (and not just drinking) tons of fruits and veggies along with other healthy foods after the fast, and they got their exercise on—as a way of life.

I know a few people who swear by juicing, in that it allows you to consume a ton of freggies in a glass. We’re obviously a fan of smoothies, which are just a watered-down (or protein-powered up, really) version of juicing. And we’re definitely in support of the idea that good nutrition and exercise can change your body and life inside and out. But two full months of nothing but juice? We’re more of the mindset that for most people—who aren’t making a DVD—should stick to the self-love eating philosophy of all good things in moderation.

With that said, the documentary’s complimentary Reboot Your Life program is interesting—and free. And the impact that juicing has on these guys’ energy, health and lives makes me want to give juicing a go, even if it’s just as a snack here or there. Now I just need to invest in a juicer… —Jenn

Add a comment Cancel reply
13 Comments
Jenn & Kristen
Diets don‘t work. We know because we‘ve been there.
Get the deets
STAY IN THE KNOW
When new stuff happens, you'll be the first to know!
Latest Offer
Working out at home
Get free strength, cardio, yoga, and meditation videos.
Try them
Podcast
Podcast Ep 137: That’s a Wrap!
Instagram Feed
X