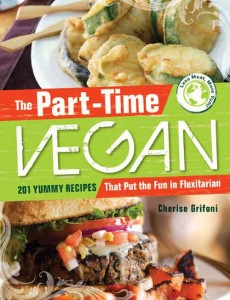 Yesterday I mentioned that a cookbook inspired me to take a look at my healthy lifestyle—both where I’ve been and where I’m going. And today, as promised, I want to tell ya’ll about the read that got my noggin’ (and my belly) excited: The Part-Time Vegan: 201 Yummy Recipes That Put the Fun in Flexitarian.

While it is a cookbook, in many ways it’s also a guide to learning more about and experimenting with a vegan diet, which, like I said yesterday, I’ve been doing somewhat accidentally as of late. But—and here’s the really cool and FBG-approved part—the whole point of this book isn’t about not eating meat or dairy ever again. Instead, it’s all about the tasty foods you can eat that don’t include animal products (a small yet totally significant difference!). In fact, the entire concept of the book isn’t about actually going vegan; rather it’s about trying a vegan diet just a few times a week. Hence the title. (All good things in moderation!)

With a fun tone that’s encouraging and never preachy, you get the basics on veganism and an awesome primer on the different (and sometimes unusual) ingredients that make up the basis of the 201 easy vegan recipes offered in the book. Among other healthy foodie ingredients, you learn about cacao nibs, agave nectar and tempeh, including where the heck to buy them and why they’re worth trying (again, in a very friendly tone that is pretty much the opposite of this vegan cookbook).

All of the recipes are divided up by type, including snacks, soups, salads, grains, tofu, etc., and there are 11 handy-dandy dinner plans that include multiple recipes that all pair perfectly for a vegan feast. There’s also a nice comprehensive index for easy browsing by ingredient, and each recipe is tagged for its benefits such as quick, high fiber and high protein. With a large mix of dishes that just about anyone will like (red beans and rice, oatmeal-raisin cookies and tomato soup), there are also a number of more adventurous and foodie dishes such as Barley Pilaf with Edamame and Roasted Red Pepper, Simmered Coconut Curried Tofu, and Pumpkin Maple Pie. And let me personally vouch for the Balsamic Vinaigrette recipe, which has become a salad standby at FBG HQ.

The only negative thing I have to say about this vegan cookbook is that none of the recipes have specific nutritional information, nor does it tell you how long each recipe takes to make (I love it when recipes tell you how long it takes to prep and cook). But really, for a cookbook that is this fun and makes trying vegan dishes not quite so intimidating? We give this healthy vegan cookbook the FBG Stamp of Tasty! —Jenn