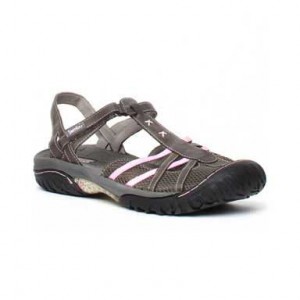 Calling all vegans, along with those who love cute and comfortable shoes! We have a new find…Jambu! Up until a few months ago, we had never heard of the footwear company, which is designed exclusively by women and meant for women who are as adventurous as they are mindful of the environment. Then the PR folks contacted us to try a pair of its Cherry-Mesh kicks, and well, a new match in footwear-heaven was made.

Despite the fact that we’ve been singing the Fanta song (replacing the word “Fanta” with “Jambu,” of course), we’ve done much more than dance around like crazed people in these shoes. Granted, the shoes are not designed to really exercise in, per se, but they’re definitely for the gal with the active lifestyle. So I walked the dog in them, went to the grocery store in them, used them as camp shoes—basically I lived in my Jambu sandals.

And I’ll continue to do so because they’re so damn comfortable. Super soft, they just make your feet melt—in a really good and surprisingly supportive way—and they make you want to do anything but sit around. And although they are casual, you can wear them with a lot of stuff—workout clothes, shorts, skirts, casual dresses, jeans, capris.

Besides being all eco-friendly-a-fied, the Cherry-Mesh is also 100-percent animal friendly, meaning that it doesn’t use any animal products. It’s also made from partially recycled and re-usable compressed rubber, and totally recycled, recyclable and re-usable packaging. A pair of these will set you back about $75. While I normally don’t spend more than $50 on a pair of casual shoes, I’d make an exception with these. And I’m not even vegan. —Jenn