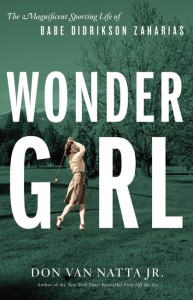 You never find the book; the book finds you. That’s my philosophy anyways. One day I was driving to work when I heard an NPR story about a gal named Babe Didrikson Zaharias who had made ESPN’s top 10 athletes list OF ALL TIME. She was the only woman in the top 10. I was immediately intrigued and went to work and Googled her. That’s when Don Van Natta Jr.’s Wonder Girl: The Magnificent Sporting Life of Babe Didrikson Zaharias popped up, and I immediately put it on my library list to check out.

Turns out it was a fascinating read. Van Natta did such a great job in telling this story. I learned so much about that amazing woman. It’s sad that I didn’t know who she was previously. You’d think the one woman who managed to excel in basketball, golf, baseball, swimming, golf, discuss, shot put, javelin, high jump, long jump, hurdles, sprints and bowling would be on the tip of every Fit Bottomed Girls’ tongue, but alas she wasn’t given the props she deserved, in my opinion.

I love how honest the book is and yet it’s that very truth that disheartened me. After reading about all of the crap Babe had to deal with (she was bullied and picked on for much of her life for being too good…her gifts were seen as too manly and therefore she was a threat to the men of that generation whom she could pulverize in any sport), I have a new-found respect for the women athletes of today.

The battle is still fresh. Seems like only yesterday that Nike ran a campaign that had little girls saying, “If you just let me play.” The book sheds light on all the teasing Babe incurred for being “too manly in stature” (reminded me of the recent press Cameron Diaz has gotten for being too muscular…). She was constantly fighting to play. Constantly fighting to to gain the respect of those who didn’t like that she came from a poor family, didn’t like her for being a girl, didn’t like it that she was the best and knew it.

The book is one inspiring page after another. I believe this woman’s story is critical for all girls who want to play. The battle’s not over yet. In order for us to know where we’re going, we must learn where we’ve been. —Tish