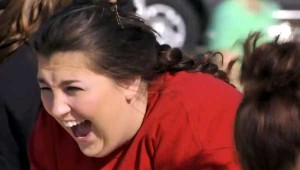 So last night, I did something I’ve never done while watching The Biggest Loser. I muted it whenever one particular person spoke. That one particular person is Conda. I generally don’t like to talk ish on anyone, but when you’re taking a show that I love and is about bettering people, and you turn it into Jerry Springer? Well, that’s just not cool. You get muted. (If you’ve been letting Conda make your blood boil, I suggest the mute button. Does wonders for your blood pressure.) And if Kim keeps it up as Conda’s bud, she might get muted, too. No negativity in my personal free time, thankyouverymuch.

So now that I’ve addressed that, let’s get to the rest of the show. The aqua team came back, and by losing more than 50 combined pounds in a month, they were able to stay on the ranch for good. (Or until they get voted off, which may be ASAP since the teams did not welcome them with open arms.) While Adrian did probably talk a little too much game (no one works out 14 hours a day…), the aqua team was a true breath of fresh air, I thought. Yeah, they probably went a little easy since they had immunity, but they went from losing a bunch of weight on their own to coming into a super hostile environment and managed to keep their heads screwed on. (And they don’t have a mute button!) It’ll be interesting to see how Adrian and Daphne do next week! And Adrian’s story? Heart wrenching. Not to mention he wears an ascot.

Also notable was the trampoline/ball challenge on the beach. Besides providing plenty of ball-joke fodder on Twitter, it just looked like a really cool challenge. Oh, and Bob did one of the best-known CrossFit workouts, “Fran,” with his team. I’ll just go ahead and admit that I’ve done Fran twice now, and they all beat my time. Sure, they did jumping pull-ups and didn’t seem to be really squatting down on their thrusters (yes, I said thrusters), but still. That workout is not for the faint of heart—or for beginners. Which is why I appreciated Bob’s trainer tip on episode five so much—ease into working out to prevent injury.

And then there was the elimination. All I could do was scratch my head at them sending Nancy, AKA Gangsta-Mom home. Obviously Conda has some alliance-protection going on or something. Regardless, we’ll focus on the positive by sharing a video of how G-Ma was doing at home. White old lady can bust a move and rap!

Can’t see the video? Click here to see how Nancy is doing at home.

Did you watch last night’s The Biggest Loser? Are you as annoyed by the petty drama and bad attitudes as we are? —Jenn

Add a comment Cancel reply
30 Comments
Jenn & Kristen
Diets don‘t work. We know because we‘ve been there.
Get the deets
STAY IN THE KNOW
When new stuff happens, you'll be the first to know!
Latest Offer
Working out at home
Get free strength, cardio, yoga, and meditation videos.
Try them
Instagram
X