While I like to consider myself a pro at making smoothies at home, being able to buy something natural when out and about is a good thing. And in the case of Jamba Juice, it’s a really tasty thing. (Not to mention they have wheat grass!) So when Jamba offered to send Tish and I to its Live Fruitfully Fitness Expo in LA? Well, it was game on. The photo below pretty much sums up the whole trip: working the muscles, eating bananas and getting fruity. 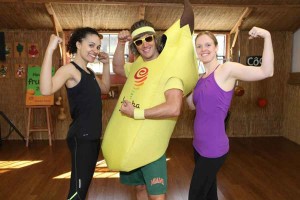 It’s not every day that you can flex with a banana.

The whole event, which gathered bloggers and fitness publications (like Fab Fit Fun, Zen Gray for Vital Juice and Fitzness to name a few!), centered around Jamba’s Live Fruitfully campaign, which is pretty much about being healthy, fit and awesome. Instead of giving you a breakdown of everything we did in the written form, I thought I’d share some photos—show-and-tell style! And there’s a lot to show because they worked us out like dogs! Happy dogs, of course.

After an intro about Jamba, the 15-minute demo classes came at us fast and furious, with two classes going on at the same time. Like true workout fiends, Tish and I wanted to try everything, so we pretty much ran from room to room, thereby getting a taste of all the workouts we could. Up first we tried Hoopnotica, which we’ve reviewed before but is super fun with a room full of hyped-up fitness writers. 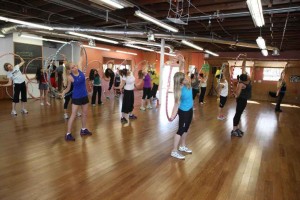 This is how you warm up for a hula-hoop class like Hoopnotica!

Up next? Bollywood Aerobics with Rahul Nath, which was like Zumba but all Bollywood-ed out with lots of jumps, head bobbing, wrist and hand movements, and pretty much everything you saw at the end of Slumdog Millionaire. It. Was. Awesome. And Rahul can cut a rug, yo. 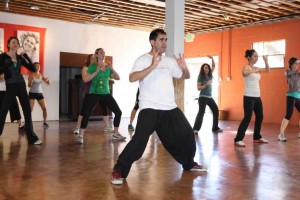 Thankfully, in this photo, you can’t see me too well, dancing awkwardly. Just use your imagination.

After that, surf was up. Well, in the fitness sense. Not the beach sense. We didn’t have a chance to hop on these boards ourselves, but the SurfSET class looked like a killer full-body workout that required quite a bit of balance, focus and core stability. Plus, the ability to look like a surfing bad-ass. 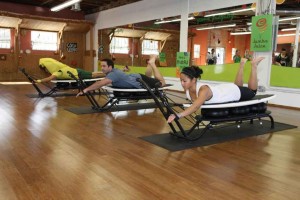 There are resistance cables to work your arms as you paddle!

Then we did some jump roping in a Foxy and Fierce class that combined intervals of jump rope with boxing drills. We jumped side to side, front to back, one leg at a time and all kinds of fancy! 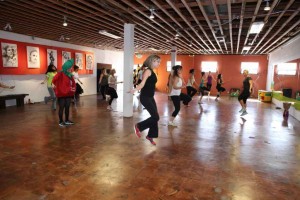 Getting some air! You can see me way in the back in the purple.

Let me just say that by this point, our energy—which had been sky-high due to a big, healthy breakfast and, well, just the excitement of the event—began to crash a bit. It wasn’t because of the jump roping because the class was great, we just—for lack of a better term—blew our workout wad early. (Yep, you read that right.) So when Jamba announced its Berry UpBEET smoothies were in the house, well, we exclaimed with happiness and sucked them down for the energy. Made with nothing but strawberries, blueberries, mixed-berry juice, red vegetable juice (carrots, beets, broccoli, spinach, kale, lettuce), mangos and ice, one smoothie has a full serving of vegetables, two full servings of fruit and 230 calories. And, I can vouch that it tastes awesome. 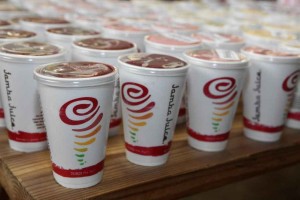 Look how pretty they are all lined up!

Happy to have some calories in our systems, Tish and I attempted a ViPR class, which was seriously no joke. With some super cool moves, you lift, strike, pivot and turn this big rubber cylinder around. The cylinder is super heavy, but once you started lunging with it like a ninja, let’s just say your muscles start screaming like a ninja, too. 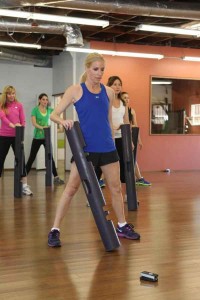 Fitz of Fitzness.com made it look easy. It wasn’t. ViPR is one heck of a workout!

Believe it or not, that’s not even EVERYTHING we did during the four-hour event. Check in to Tish’s blog next Wednesday for her recap, which includes other fun workouts we tried and her take-homes from the event!

Are you a Jamba Juice fan? Ever posed with Banana Man like we did? Tell us about it! —Jenn