Jenn wasn’t lying when she said we went and got ourselves fruity! Looking back, it was a total drive-by fruiting. I was in no way, shape or form prepared for the amount of sweat that would pour out of my body and onto those floors. THREE HOURS, PEOPLE! In three hours I moved like I’ve never moved before.

I was totally exhausted by the time I dragged my poor body over to the Pound Rockout Workout, but then I saw the drum sticks, and I perked up a bit. I’ve always wanted to be Sheila E! It’s a hard workout, but you’re having so much fun slamming your sticks and making beats with the moves that you totally forget that your legs and pelvic region is on fire. Out of all the workouts we tried, this was my favorite. I plan on totally hunting down Cristina and Kirsten and taking some more classes. Because, at the end of the day, don’t we all want to feel a little rock-star after our workout? This takes the bad-ass feelings and multiplies them by 10. Just beat it! 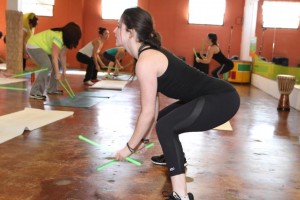 Squatting is so much more fun when you've got purpose! (AKA, getting down to beat the floor!)

Have I ever mentioned that I suck at coordination? Well, I do, which means me and Zumba are pretty much not good for each other. Cue the Fairy of Trickery. She made sure two hours into the workout that I’d have to try Juicy Athletic Moves. On a good day, I can’t shake my hips like Beyoncè. So after two hours of insanity, I looked like a slow-motion version of Gumby. The instructor had just finished a session with Pink (whose body I love), so Ms. Jamba-Samba was doing something right! 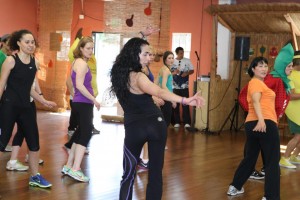 Cardio Carnival was just the Fairy of Trickery’s icing on the cake. Instructor Corey Coombs was working it. I, on the other hand, was working out cramps in my butt, hips, feet, arms…. 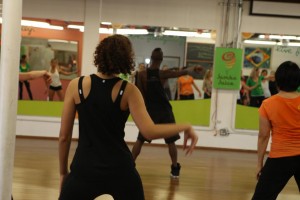 Look at his arms and then mine. Yep, I was on my last leg...and arm.

Tempest Freerunning (Parkour) was the last workout, and by then I was so exhausted I could barely crawl, which was a shame because I’ve seen this bad-arse ish in movies like The Bourne Ultimatum. 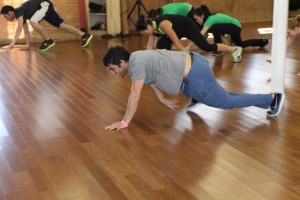 I complain and whine about the torture, but I can’t tell you how awesome I felt knowing I didn’t die in that building. I’m grateful to Jamba Juice for introducing me to so many cool workouts I had never heard of, as well as the new juices and smoothies at their stores. I’m a HUGE wheat-grass shooter, so it was nice to find new things to try. Now, I’m obsessed with the Apple ‘n Greens smoothie. It packs apple-strawberry juice, carrots, spinach, bell peppers, kale, spirulina, lettuce, peaches, mangoes, bananas and ice. Can you say “awesome smoothie?” I can.

Do you have Jamba Juice stores near you? Do you juice up to prepare for a workout or as a treat after a tough sweat session? Juicy minds would like to know. —Tish