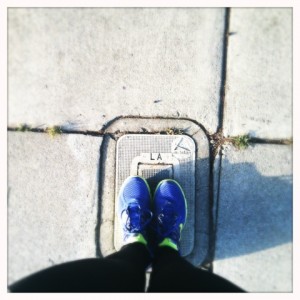 It’s been a long time since I’ve “zoned” out on a run and used the time to think, focus and clear the air. Part of the reason for that is that my lungs are out of shape. I ask myself at the start of every run: How on earth was I ever able to run a marathon?! That seems like three lifetimes ago! I have THE hardest time regulating my breathing and working out the leg pains, knee pains, etc., so that I’m in a good, neutral place. The kind of good place that allows me to get to the nitty-gritty of my day—my form of meditating, if you will.

Usually I fight, kick and curse the sky for taking that running ease away, but then I had this thought while running the other day…

I was running uphill into the wind and I was tiring myself out pretty quickly when something deep down encouraged me to acknowledge the fact that I was just starting out on the run. I still had two miles to go and would do my body and sanity a favor if I just stopped fighting it, slowed down my pace and mustered through the hard part.

I knew I’d reach the end point sooner or later. Again, I asked myself what the silly rush was and then went about my run.

The same encouragement and subsequent advice could also apply to my other dreams and acting pursuits. I know I’ll get there. Right now, I’m on an incline with some annoying wind pushing me back. I just have to get comfortable with the pace I know I can do (that won’t kill me!) and trust that I’ll get there sooner or later.

Which is what I did on that run. I finished the whole thing without feeling like I had squeezed every last ounce of oxygen from my lungs. I felt good, and I wasn’t even that much slower than usual. (Go figure!)

Lesson: Not all of us were born with a golden 6-minute pace. Just hope that metaphor holds up… —Tish