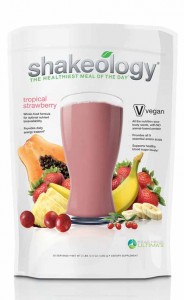 That’s what I hear in my head—set to the tune of this song, of course—every time I hear anything about Shakeology. It’s a quirk, I guess. And one that I honestly kind of enjoy. A gal can never have enough Prince in her life in my opinion. But let’s go ahead and get to the point of today’s Shakeology review (of which we are not a vendor, FYI): a new flavor that’s vegan! We were sent a week’s worth of Shakeology Tropical Strawberry power to try, and try we did.

While we’ve reviewed Shakeology in the chocolate flavor before, we were interested in this one because it is a) tropical (like vacay, whee!) and b) vegan. Over the last year or so, I’ve figured out the hard way that my body isn’t a fan of dairy, so a lactose-free protein powder is a bonus in my book. Plus, I’m a huge geek for obscure superfoods—and Shakeology is known for hunting down the most “super” of all foods out there. The Tropical Strawberry boosts the usual goodness of Shakeology, plus the new superfoods: coconut flower nectar, Luo Han Guo Fruit (which I’m kind of obsessed with—expect more on that in an upcoming post), Himalayan Salt and Konjac Root. A one-packet serving comes in at 160 calories, 1 gram of fat, 20 grams of carbs, 4 grams of fiber, 10 grams of sugar, and 15 grams of protein from raw sprouted and bio-fermented brown rice protein with sacha inchi, quinoa, chia, flax, amaranth and spirulina.

But—and this is the kind of butt that Sir Mix-A-Lot sings about (AKA big!)—how does it taste? And is it as creamy as it claims to be? Vegan protein powders are notorious for being grainy, so we tried Shakeology Tropical Strawberry in three ways. First, just a packet mixed with water and ice in the Vitamix. Second, “Almond Paradise” with a packet, almond milk and almond butter. And third, “Tropical Breeze,” with a packet, coconut milk, strawberries, an orange and half of a banana (plus I added kale, of course). The verdict? While Shakeology Tropical Strawberry is just okay on its own (just a bit grainy with a stevia-heavy aftertaste), when it’s mixed with other stuff it just gets better. While Almond Paradise was far better than it was just plain, Tropical Breeze was downright delicious. And tropical! (Read: rum would be good in it.)

So if you’re on the Shakeology train (and the stuff does make you feel pretty darn good after you drink it), this flavor is worth giving a shot, although you’ll want some mix-ins. Depending on how many extras you throw into the blender for flavor, just know that—even though it’s healthy stuff—your calorie count can easily zoom up past 300. Which is fab for a meal, but pretty high for a snack.

Has anyone else tried Shakeology Tropical Strawberry? Agree with our Shakeology review? Let’s swap notes—and tell us what your fave recipe is! —Jenn

Add a comment Cancel reply
28 Comments
Just for You
Drop the diet for good
A variety of anti-diet coaching programs just for you.
Get free access
STAY IN THE KNOW
When new stuff happens, you'll be the first to know!
About Us
Jenn and Kristen are passionate about letting women know they're more than a number on the scale.
Get the deets
Instagram
X