I love, love, love me some weekend eats. Here’s why:
First, I fueled up with a yummy smoothie for breakfast. I had gotten in late the previous evening from flying back from LA (to meet and work out with freakin’ Bob Harper), so I was a bit jet lagged and in need of some serious good, healthy nutrition from all of the excitement/nervousness and travel. And water. Lots of water. 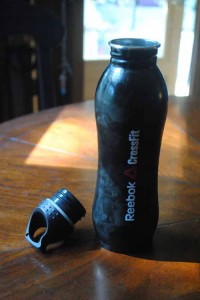 I always start my day with a cup or two of cold water.

I change it up from time to time, but here’s the ingredients of my smoothie. Sadly, I was out of kale (oh, the travesty!), so I made do with frozen spinach for my veggie. 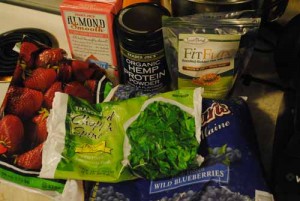 A little bit of everything healthy…

Yeah, so it doesn’t make for the most appealing looking smoothie (Ryan says it looks like something they’d drink in Star Wars), but it tastes pretty good. I swear. 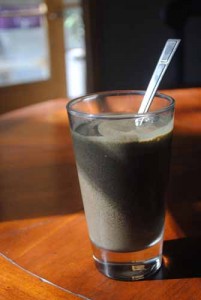 Nothing like starting your day with protein, healthy fats, fiber and at least three servings of fruits and veggies!

Then, Ryan and I rushed off to a mid-morning appointment to get our hair cut. I was in serious need of a trim. A couple hours later—and with a much better hair situation going on—we were hungry again and decided to get adventurous for lunch. A few weeks back, FBG received a gift card to particpate in General Mills’ first-ever Healthy Restaurant Road Trip. A team from the company’s eatbetteramerica.com site visited six restaurants cities across the U.S., including Eden Alley, a vegetarian restaurant in my hometown Kansas City! What what! So, you know, I had to check it out. And it was so darn pretty out, it seemed like the perfect day for a lunch date. 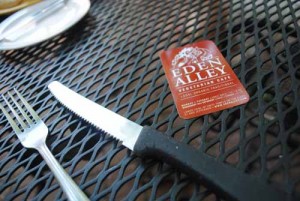 It was a beautiful day, so we ate outside!

Turns out, we were there on what I’ll now call the best breakfast in KC: Eden Alley’s Saturday Brunch. 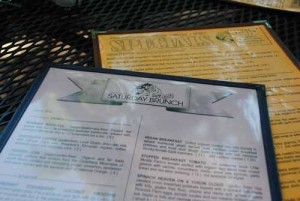 After oohing and ahhing at the special menu for a good 10 minutes, I finally made my food decisions. (As you can tell from how much we ate—I had trouble not sampling everything.) First, I started with the Morning Mock-Tail, which had frozen red grapes and strawberry lavender kombucha infused with pomegranate nectar. Um, YUM. Ryan had this ridiculous chocolate coffee drink that definitely wasn’t healthy but sure was delicious. (Health tip: just because something is vegetarian or gluten-free doesn’t mean it’s always good for you!) 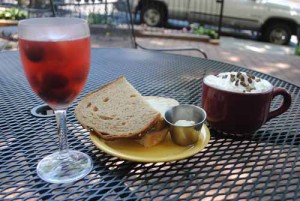 They also brought out bread with honey butter, which I somehow managed to not fill up on.

Next up, a starter of French toast that I split with Ryan (in my world “split” means that he gets two-thirds and I get a third—it works out well for both of us). But this was no ordinary French toast. Oh, no. It had a cinnamon ginger batter made with hemp milk, brown sugar and flaxseeds and was served with agave butter, apple sauce and maple syrup. Holy Jesus, it was good. 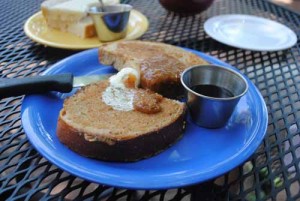 Next up, our entrees. I had a small Ooey Gooey Mash, which had grilled local free-range eggs served over candied onion breakfast potatoes with grilled baby spinach, mozzarella and parmesan cheese with a splash of tomato basil coulee. Let’s just say I cleaned my plate. 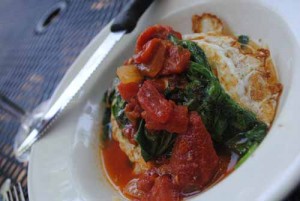 It was as pretty as it was tasty!

Ryan had The Works, a whole-wheat parsley biscuit smothered in a tomato cream gravy and tomatoes with two poached eggs over breakfast potatoes and a little hollandaise. A much heavier dish than mine (Ryan has to work to keep weight on—must be a tough life), I did manage to snag a bite (or three), and it was heavenly. Although rich and creamy, the parsley biscuit was really the star of the dish, I thought. It was hearty and super savory—I don’t think I’ve ever enjoyed parsley that much before. 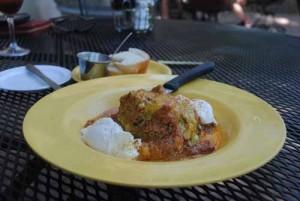 Who knew parsley could be so tasty? Not I.

Then, even though we were totally full, we ordered dessert. By this point, we truly felt like we were on vacation we had so much food-happiness going on. So a raw carrot and apple tart with a crust made from macadamia nuts and coconut? Um, yes, please. Get that in my belly. 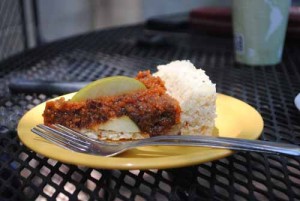 Needless to say, we split this and were totally stuffed. Couldn’t even finish it all!

After that, I didn’t get hungry…for hours. (Which is a departure from the norm because I usually eat every two to three hours.) But once I did, we decided to grill out. And bust open this bottle of cheap French wine. 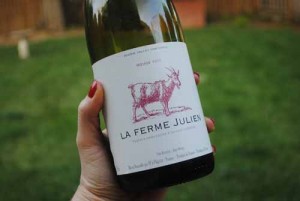 A rare departure from my cheap wine of choice: Charles Shaw (aka two-buck Chuck).

We had some friends over to share in the fun and wonderful summer weather (and, okay, maybe a bottle of two-buck Chuck came out, too…) and then once the sun was down, we feasted on grass-feed burgers (I go sans bun and use romaine lettuce leaves like a wrap) and roasted veggies. Seeing that I’m apparently not used to taking photos of everything I eat (and because I’d, ahem, had two glasses of wine), I neglected to take a photo until I was half-way through my meal. So, er, take what’s on this plate and double it to get an idea of what I really ate for dinner. I ended up having two burgers and lots of veggies! 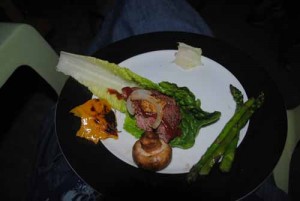 So, my night food photography skills need some work…