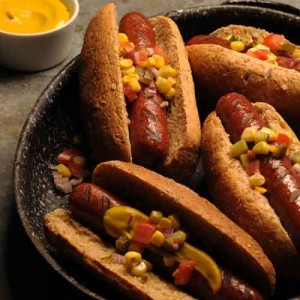 I've never been a huge lover of hot dogs, but these Prescott Frost ones take the hot-dog game to a new level.

Before we begin, let me just set a goal…a goal to not make one single wiener joke. NOT ONE! We are talking about hot dogs after all…and not just any hot dogs. Organic, grass-fed beef-only hot dogs that come from the Nebraska ranch of one of the descendants of famous poet Robert Frost, Prescott Frost. Yeah, for reals! And because I like to take the road less traveled, too, when the company asked if we’d like to try some of their Grass Fed Organic All Beef Hot Dogs, I was interested. We don’t normally review plain ol’ meat up in here, but the Frost-connection, wiener-joke possibility (this was before I set a goal to be mature and stuff), my interest in organic high-quality protein and the fact that it’s Fit Bottomed Eats Week made me say “giddy up, cowboy, and hook me up with a dog, dawg.”

And before I knew it, I had a hot dog in my mouth. (Let me be clear. That is NOT a wiener joke.) And it was like the hot-doggiest of all hot dogs I’ve ever had in my mouth. (Again, not a wiener joke.) Rich, beefy, filling—pretty much everything I wish hot dogs were but most certainly are not in most cases. In fact, I’m going to go ahead and declare this the best hot dog I’ve ever had. To heck with what’s at the ballpark or served up out of a food truck at 2 a.m., this is the best. 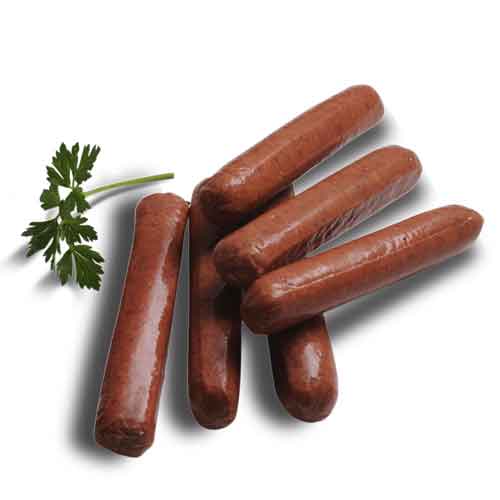 Hey, I said no wiener jokes!

And there’s a reason why they’re so darn tasty. In fact, it’s what’s not in them that makes them so delicious. With no chemicals or preservatives, they’re made of 100-percent USDA-certified organic, grass fed beef. According to Prescott Frost, grass-fed beef has 10 times more beta-carotene than feedlot beef, and its meat contains three times the amount of vitamin E found in other brands, along with omega-3 fatty acids. You can order a 12-ounce package of them for $7.50 online, which is pricey for hot dogs, but not that pricey if you’re used to buying high-quality meat. (For the record, I’d rather eat less of the really good stuff than more of the poor-quality stuff.)

I had them on the grill both in the backyard and while tailgating (I get around with my hot dogs—still not joking), and I can tell you that these hot dogs plump up and crisp up. And I don’t think I’ll ever eat any lesser hot dog ever again. Because, really, what’s the point? This is what a hot dog is supposed to taste like! And total side note, I also tried some of Prescott Frost’s ground beef, and it was super good, too, although the hot dogs stole the show for me.

So, tell me, do you eat hot dogs at all? Would you if they were like these and not so sketchy? Buy only organic, grass-fed meat? Have a great wiener joke you’d like to tell (PG only, please)? Share in the comments! —Jenn