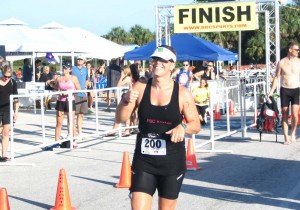 I didn’t meet all my goals, but it’s not so bad.

At the beginning of the year, each FBG shared her healthy goals for 2012. With a new New Year sneaking up on us, we thought it only fair to see how those previously set goals were going for us in this Question of the Week! After all, goals only work if you measure ’em!

Back in January I came up with five goals I hoped to meet throughout the year. Here’s a spoiler alert: I didn’t meet them all. I know, the disappointment is crushing, right? But you know what’s funny? Setting these goals, then coming back to them months later was a really interesting study in how what seems important looking to the future feels a lot less important in hindsight.

Goal #1: Get more creative in the kitchen. I’m going to give this a meh. There have been some new recipes, and, thanks to my TMJ, I definitely got creative when it came to putting together liquid meals. But, when I set this goal, I had envisioned this creativity really changing the way we ate in our house, and that hasn’t really happened.

Goal #2: Hit a class once a week. Hahahaha NO. Not even close. I have done more yoga classes this year than I did in 2011, which was part of the spirit of this goal, but I’m nowhere near hitting a class at the gym weekly. I do go to swim class once or twice a week, and join a group run at least once a week, but no. The classes haven’t happened.

Goal #3: Try something new once a month. I remember thinking, when I set this goal, that hey, once a month? That should be a piece of cake. I’m now trying to remember if I was drinking when I had that thought, because, boy, I blew this one. The upside to this is that I’ve felt really quite happy with the stuff I’ve been doing—I might do a lot of running and biking and swimming workouts, but they’re all different, so …yeah. It still doesn’t count. Fail.

Goal#4: Track my distances. I win this one! I have tracked all my workouts and distances faithfully. I’ve run more than 360 miles, biked more than 600, and swam almost 70 miles (which, according to Daily Mile, means I’ve burned 667 donuts. Who knew?). I can see which months were more intense, and I’ve kept good notes about how I felt during most of my workouts. I think this is going to be a really valuable tool going into next year when planning out my training and race schedule.

Goal #5: Set at least one PR. This is another goal I met. BOOM. Technically, my TriRock Clearwater race was my first official Olympic distance tri (since the swim was shortened due to weather on the first one I did), and if it’s a first time, that makes it a PR, right? And I participated in my first swim meet, so my times for all those events were records. I set this goal right before my disastrous Miami half marathon, and I was really disappointed in missing all my goals for that race, but my training paid off when I ran my fastest 5K a few weeks later.

I have one other goal I want to mention, which I set in the spring. In 2011, I had built my running mileage all winter, but as soon as summer hit, I lost it all. I don’t run well in the Florida heat. So, this year, I was determined to get up early at least three days a week to do a workout. And I did. I made it to my 6 a.m. swim classes and met friends at the pool, I hit the track and trails and roads for running dates, and even did some early morning yoga classes. And, now that it’s cooled down, I’m feeling stronger than ever. This might not have been one of my January goals, but it ended up being more important to me than most of the ones I set back then.

Have you met any of your 2012 goals regarding health and fitness? Brag a little! —Kristen