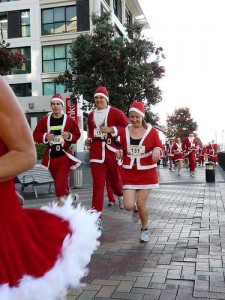 I don’t plan on dressing up like Santa for my 5K, but I appreciate these people’s holiday enthusiasm nonetheless. Credit: planmyplay

Yeah, so I really have no idea what that song means or where that adaptation of “Jingle Bells” came from, but lately it’s been my running theme song. Or at least the one that runs (pun intended) through my head every time I think about my latest running goal: The Jingle Bell 5K. My lovely gym, which is known for being pretty freakin’ awesome (and hard), has organized a team for this event on the morning of Sunday, December 9, and Ryan and I are doing it. Plus, there will be coffee and pancakes after.

Usually, I don’t sign up for 5Ks in the winter months for a number of reasons. First, it’s usually freezing out. Second, I might have to drive in snow in the morning. (I seriously hate driving in snow.) And third, I have terrible luck when it comes to race weather. (Are we seeing a theme here in my reasoning?) Well, this race pretty much quiets me the heck up because it’s done on a heated, underground course (gotta love Midwest caves!) that also boasts being super flat. Oh, and since my husband is doing it, I can pretty much delegate driving duties to him if the snow-apocalypse does occur. Booyah; excuses to not run a race in winter abolished.

And while I didn’t set a goal for our recent 10K in Brooklyn, I feel like I need to on this one. First, I know my husband will smoke me, and trying to stick with him will only result in bad, bad things. Like divorce. (I kid, I kid.) Second, I think the course will be kind of tight and so it might be hard for any kind of a team to stick together. And third, well, we’re about to dive into the holiday season and it’s always a good idea to have some sort of goal to keep ya on track, right?

So, let’s set a goal, shall we? I’m a bit of a pokey runner, and 10-minute miles have always felt pretty fast for me. But for just a 5K? Well, I think I could push it…maybe even to a 9-minute mile. I think that’s hard enough to make me get out and train and push it, without being totally unrealistic (remember those SMART goal guidelines!). So…my goal is to run this 5K in 28 minutes or less! And get a new theme song stuck in my head…because why diss on Batman and Robin for no reason?

Phew. My goal is out there. And public. I’ll, of course, let you all know how I do! In the meantime, tell me: What goals are you setting this holiday season to keep your fitness up and awesome? —Jenn