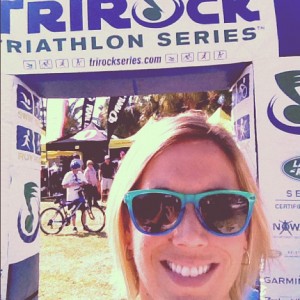 Bright and sunny at the start! Credit: Kristen Seymour

I recently had my big race of the year—the Land Rover TriRock in Clearwater, Fla. I chose this race early on and decided I would train for the Intermediate distance, and I’d aim for a great performance there to close out my year.

The location was great—in fact, my husband and I got married just a few miles down the beach from where it took place—and it was scheduled over Veteran’s Day weekend, so I figured I would make a weekend of it and stay the night after the race to relax and recover. I didn’t know many other people racing, but it didn’t matter. I was excited.

Well, long story short, this entire fall has consisted of me having issues with my back, easing up on my training in the hope of my back fully healing, and then going back into training when it felt okay. Which, as you can imagine, led to two things. First, my training was nowhere near what I would’ve liked for it to be going into the race. I’ve only done one other triathlon of this distance (and the swim was actually cut short on that), so I had really wanted to be prepared. Second, well, I wasn’t at 100 percent. I considered dropping down to the Sprint distance, but decided that, with it being my last race of the year, I should just go for it. 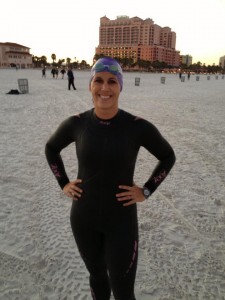 I grew up in Michigan, and I like to think that I can handle cold water. I’ve done many swims in pretty chilly temps, but the forecast  for this race, both for the water and the air temp, drove me to buy a wetsuit. Pro tip: Probably don’t buy a wetsuit, try it on once, and then do a race in it the following morning without, you know, swimming in it first. I was thrilled with the fact that I didn’t get cold, but had a really hard time adjusting to the feeling of a wetsuit on my shoulders. It’s restricting. I don’t like it.

My time on the swim was 29:26, which wasn’t terrible, but wasn’t quite what I would’ve liked it to be. Add to that the fact that I got slightly stuck in my wetsuit (Pro tip #2: Drop your goggles from your hand before trying to pull your wetsuit over said hand), and I was not where I wanted to be going into the bike. Still, I was feeling calm and my legs felt strong, so I had high hopes.

This is where I suspected I’d run into trouble, and I was right. The bike was what had been aggravating my back, so this was where I’d cut down the most severely in training. I’d gotten several 15-to 20-mile rides fairly recently without too much pain, though, so I started out optimistic, thinking that I’d at least get 15 miles or so before I had any real trouble. Instead, at mile 8, my back started tightening up. Within a couple more miles, my right thigh (both inner and outer) felt tight and extremely fatigued. I settled into a much slower pace than I’d intended to keep and stayed in a light gear, thinking that if my bike was going to be a disappointment (and it was), I’d just save my legs for the run. It took me 1:32:05 to finish, which put me at 16.2 mph average. Not as bad as I’d anticipated, but I had some serious work to do.

As I hopped off my bike and got into transition, that same right leg that was giving me a little trouble on the ride really turned up the heat. I nearly fell trying to bend over to grab my race bib, and had to shuffle-walk out of transition, thinking the entire time, “There’s no way in hell I can run a 10K at this point. I can’t even walk. Should I drop out? I should probably just drop out.”

I saw my husband right outside the transition exit and told him I wasn’t sure I could finish. He told me he was sure I could, and to just give it my best. Without that short and sweet pep talk, I probably would’ve quit—I was in pain and holding back tears and bordering on becoming a big ol’ hot mess. But, I sucked it up, turned my shuffle-walk into a shuffle-jog (it didn’t hurt any more to do one than the other), and, a couple of miles in, I loosened up and felt a bit better.

And then I saw one of those bridges I’d ridden over earlier. And then I realized I had to run up and over it. Twice.

My pace ended up being nowhere near what I’d aimed for—at 1:11:02, I was closer to 12-minutes-per-mile than 10, and having come off a couple of great cool weather training runs, I’d been really excited for this leg of the race. But, I was able to pick the pace up for the last mile or so and finish strong. 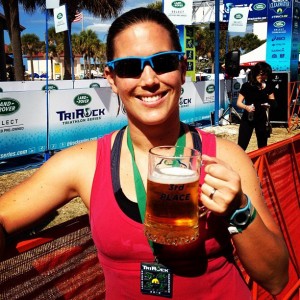 After a disappointing performance, I hit the beer tent with my husband, mother-in-law and sister-in-law (all of whom cheered me through the finish line) and watched the awards being given out. As they began the announcements for my division (Athena), I said, “Ha! Let’s see how much faster everyone was than me!” And then they announced that I’d taken third place in the division, and I won a beer mug trophy (which I then got to fill up). Talk about a happy ending!

Here’s the funny thing about this race. Yes, I was in a lot of pain and there were definite periods of misery. But at no point did I feel at all like I did during the horrible half marathon I ran in January. Although I considered quitting that day, not once did I consider never doing another intermediate distance triathlon. Hell, I didn’t even make a decision on whether or not I’m doing a longer one next year.

Part of it might’ve been the race itself. This was one of the best-run races I’ve ever participated in. The course was really clearly marked, there were tons of enthusiastic volunteers, there were police or event staff at basically every single intersection on the bike route, and, you know, there were bands playing during the run. My performance actually mattered very little to me—I still had a great experience.

This race will certainly be a yearly event for me, and even my husband is considering racing the shorter distance. Have you ever participated in a race where you didn’t meet your goals but still left feeling happy? —Kristen